Texas collects most of its tax revenue on retail sales and various forms of business activity. Some taxes, however, commonly called “sin taxes,” are levied on the sale of alcohol and tobacco products as well as activities related to gambling. While these taxes, like all state levies collected in Texas, help fund state programs, they’re also intended to deter people from activities considered detrimental to their health or to society. 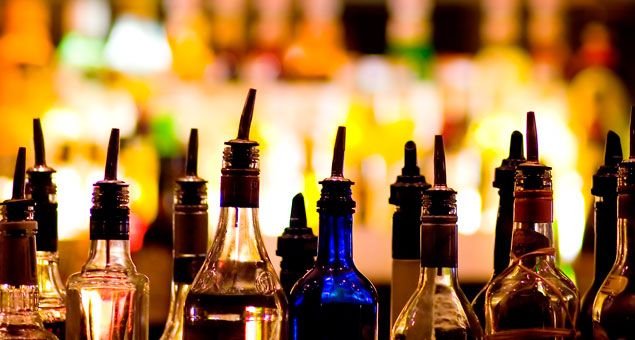 Of the sin taxes, those on cigarettes and other tobacco products brought in the most revenue, at $1.5 billion. State revenue from gambling activities, which in Texas include the state lottery and pari-mutuel horse and dog racing, brought in $1.2 billion in 2015, although 99.7 percent of that total came from the state’s share of lottery proceeds alone. Alcoholic beverages contributed another $1.1 billion in taxes, about 30 percent of all sin tax collections.

In the U.S., sin taxes can be traced back to the late 18th century, when the new nation assumed the debts incurred by the colonies during the Revolutionary War. To fund the debt, President George Washington’s Secretary of the Treasury, Alexander Hamilton, proposed a 7-cent-per-gallon tax on domestically produced distilled spirits. Approved by Congress as part of the Revenue Act of 1791, this “whiskey tax” was the first excise tax levied on a domestic product in the nation’s history. (An excise tax is a per-unit tax levied on a product.)

Tobacco taxes followed soon after, but were quickly repealed and did not surface again until the Civil War.

Farmers strongly resisted the whiskey tax, as many were using part of their harvests to produce distilled spirits for sale. Their refusal to pay the tax led to violence against its collectors during the infamous Whiskey Rebellion, which ended in 1794 when President Washington himself led 13,000 troops into western Pennsylvania to suppress the insurrection and confirm the supremacy of federal laws within the states.

The whiskey tax was repealed during Thomas Jefferson’s presidency, and distilled spirits remained untaxed until the 1860s, when the cost of the Civil War forced Congress to resume taxing alcohol — and additional goods, including cigars and other tobacco products — as part of the Revenue Act of 1862. In fact, between the Civil War and the creation of the federal income tax in 1913, most of the nation’s non-tariff revenue derived from excise taxes such as those on liquor and tobacco.

Most states began levying their own excise taxes on alcohol and tobacco products in the 1930s, when the Great Depression dented their other revenues. Lawmakers sought new revenue sources that would not overly burden the already struggling population.

Today, all 50 states and the federal government impose some sort of tax on cigarettes and alcoholic beverages. State lawmakers often see sin tax increases as easier, politically, than raising state income, property or sales taxes, and in recent years have relied on them extensively to patch budgets. Since 2000, states collectively enacted 125 cigarette tax increases and another 31 on alcohol. The same period saw only 21 increases to state sales taxes, for instance.

One reason sin taxes may be more palatable than other taxes is because they fall only on those who use the product or partake in the activity — and many disapprove of the items and activities in question anyway. Also, sin taxes generally are built into the retail price of the product or activity, and consumers are not always aware they're paying them.

Generally, these taxes don't produce a significant share of state revenues, although some states rely on them much more than others. Governing magazine recently listed Rhode Island as the state most dependent on sin taxes, which contribute 15.9 percent of that state’s total tax revenue (Exhibit 2). Texas’ share was 4.6 percent, slightly above the national average of 3.8 percent in 2014. (Note that these percentages do not include lottery proceeds.)

Generally, the state turns to sin taxes during times of budget crisis; the Legislature also may impose sin taxes for specific funding purposes.

Texas has taxed liquor and cigarettes since the Great Depression. Pari-mutuel betting in Texas has come and gone over the years; it was legal from 1905 to 1909, again from 1933 to 1937 and finally from 1987 to the present. The Texas Lottery sold its first tickets in 1992 (Exhibit 3).

Texas levies two types of tobacco taxes — one on cigarettes and another on cigars and other tobacco products (e.g., chewing tobacco, pipe tobacco and snuff). The 1931 Texas Legislature created the first Texas tobacco tax, enacting a 3-cent levy on each pack of 20 cigarettes. Between 1950 and 1990, this rate increased nine times, reaching 41 cents per pack, where it remained until 2006. In that year, a special session of the 2005 Legislature voted to raise the cigarette tax rate to $1.41 — an increase of $1 per pack of 20 — effective January 1, 2007.

Texas began taxing alcoholic beverages in 1935, and currently has six separate alcohol taxes. Four are excise taxes on liquor, beer, wine and malt liquor (Exhibit 4). These taxes are remitted at the wholesale level by distributors.

* Barrels are industry-standard 31-gallon containers.
** For wines with an alcohol volume of 14 percent or less.

The 2015 Legislature repealed another alcohol tax, levied on alcoholic beverages sold to train and airline passengers, as of Sept. 1, 2015.

In 1987, Texas voters approved a statewide referendum allowing pari-mutuel wagering on horse and greyhound races. At present, the state has four active horse racing tracks and three greyhound tracks that are inactive but offering betting on races simulcast from other states (Exhibit 5). In 2015, these tracks brought in about $3 million in state general revenue. The popularity of pari-mutuel racing has declined considerably in recent years, however, and the 2015 total represents less than a third of what the state realized in 1993.

The Texas Racing Commission (TRC) has proposed expanding gambling at horse and dog tracks by allowing “historical racing” — a game played on a device resembling a video slot machine that allows gamblers to bet on replays of old races — and promulgated rules for the activity. Racing industry proponents claim this feature could generate hundreds of millions in additional revenue for the state. Some members of the Legislature oppose TRC’s proposal, however, and a district court has struck down the rules. At this writing, historical racing is not yet offered at Texas tracks. 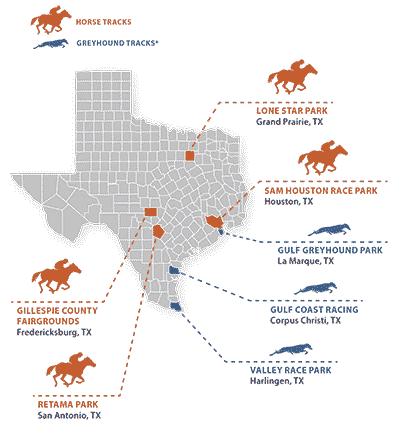 The 4 horse tracks in Texas are:

The 3 dog-racing tracks in Texas are:

*Tracks do not currently offer live racing, but allow betting on simulcast races from other states.
Source: Texas Racing Commission

In 1991, state voters approved a constitutional amendment authorizing the Texas Lottery. The question of whether a state’s share of lottery proceeds constitutes a “sin tax” is debatable, but the Tax Foundation, a national tax policy research organization, maintains that if a state’s intent in offering a lottery is to raise revenues for the state — as in Texas, where net lottery proceeds support public education — the payment is a tax.

The Legislature repealed Texas’ controlled substances tax effective Sept. 1, 2015, but not at any great cost to the state. While the Comptroller did collect a little revenue from the tax each year (less than $7,400 in fiscal 2015), the number of stamps issued was minimal and most likely were purchased by collectors.

In states where marijuana is legal, however, tax revenues can be significant. In September, for instance, Colorado’s Department of Revenue reported that the state’s taxes on the drug, which is legal there for recreational use, totaled nearly $70 million in fiscal 2015, while alcohol taxes raised just $42 million.

Another Texas levy, imposed in 2007, is placed on establishments that host live nude shows and also allow alcohol consumption on their premises. This $5-per-patron fee, officially named the sexually oriented business fee (and nicknamed the “pole tax” since strip clubs are subject to it), is used to support sexual assault victims' assistance programs and provide health insurance for the poor.

Texas’ Third Court of Appeals upheld this tax in 2014, following a number of challenges by the adult entertainment industry. It generated $8.9 million in fiscal 2015.

As the court indicated, sin taxes not only raise revenue for government, but also can be intended as a deterrent to behaviors considered harmful. The belief is that the higher the taxes, the more people will be discouraged from engaging in these behaviors.

For example, many people believe that cigarette taxes reduce smoking and thus improve public health. While studies vary widely on this issue, many indicate that the cigarette tax does indeed serve as a deterrent — but more so for younger people than for older, long-term smokers.

In Texas, per-capita taxed cigarette sales peaked in 1982 at 131.2 packs a year, but by 2014 had declined to 33.7 packs per year, a 74.3 percent decrease (Exhibit 6). During those 32 years, the combined Texas and federal cigarette tax rates increased by 812 percent, from 26.5 cents a pack to $2.42. While these numbers may suggest a correlation between rising cigarette prices and decreased sales, many other factors may be involved, such as growing public awareness of smoking risks, public smoking bans and prevention efforts aimed at children and teens.

Sin taxes are “flat” taxes, applying the same tax rate to every taxpayer regardless of income and without deductions or exemptions. For this reason, many consider them unfair because the tax costs the poor a larger share of their income than the higher-income population. But this phenomenon, called “regressivity” in tax lingo, applies to excise taxes in general, because everyone pays the same amount per product or service, regardless of income. (Income taxes, by contrast, are “progressive,” since rates rise as income increases.)

The Future of Sin

While alcohol and tobacco have been the historic focus of sin taxes, today a growing number of other consumer products are being singled out. Some states, for example, now tax certain foods and beverages that are high in sugar, trans fats and other ingredients considered unhealthy, and associated with the rising incidence of obesity and Type 2 diabetes.

In the event of a future budget crisis, it’s possible that Texas lawmakers will consider raising rates on current sin taxes or even creating new ones. Soda and candy taxation proposals have come up for legislative debate in the past, as has the expansion of gambling.

Gambling proponents suggest the state could raise substantial amounts by legalizing and taxing casino gambling, although estimates of potential revenue range widely and would depend on the number of casinos, the types of games authorized and the portion of gaming revenue going to the state.

In the meantime, Texans' sin taxes continue to add revenue to state coffers. While it’s unclear whether they'll ever succeed in curbing our appetite for tobacco, alcohol and gambling, at least state services benefit from our vices. FN

More information on Texas taxes, visit the Taxes section of this website.