The 2015 legislative session that concluded on June 1 considered thousands of bills and passed more than 1,300 of them, including HB 1, the General Appropriations Act, a weighty budget document calling for $209.4 billion in state spending in the next two years. 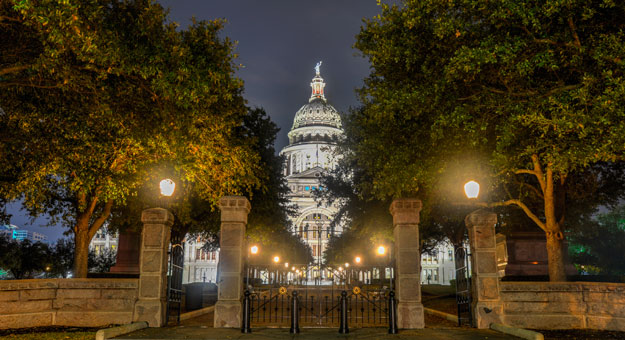 The 2016-17 biennial budget is a fiscally prudent one, well beneath various spending caps built into state law.

In addition to HB 1, however, a number of other new laws will have significant impacts on our state’s finances. In this issue, Fiscal Notes takes a look at a few of the most important ones.

From the start of the 2015 session, the state’s leadership made it clear that meaningful tax relief would be a major priority. Two bills delivered on this promise.

Since the amount of the exemption is established in the state constitution, Texas voters will be asked in November to approve an amendment making the change.

Importantly, SB 1 also requires the state to make up for the loss in funding to school districts, which rely heavily on property tax revenues. According to the Legislative Budget Board (LBB), absorbing these losses will cost the state about $1.2 billion in the next two years, and more thereafter.

HB 32 cuts the state’s franchise or “margin” tax rate by 25 percent, and could save businesses across the state up to $1.3 billion in fiscal 2016 alone. The franchise tax, the state’s main business tax, accounted for about 9.3 percent of all Texas tax collections in 2014, or more than $4.7 billion. The bill will reduce state revenues by nearly $2.6 billion during the 2016-17 biennium, mostly from the state’s Property Tax Relief Fund.

At the beginning of the 2015 session, Comptroller Glenn Hegar identified several outdated tax laws and recommended their repeal to ease the tax burden on business and make tax administration more efficient. Ultimately, the 2015 Legislature repealed:

The minor taxes and fees repealed represent a revenue cost of only about $17.4 million in the 2016-17 biennium — an amount that will be more than made up by redeploying Comptroller resources to enforce other Texas taxes.

Governor Greg Abbott cited early education as one of five emergency items facing the 2015 Legislature. One successful bill supported by the governor, HB 4, establishes the High Quality Prekindergarten Grant Program to provide up to $130 million in 2016 and 2017 for state grants to support pre-k programs in public schools and open-enrollment charter schools.

School districts (and charters) can receive this funding for students who are four years old as of Sept. 1 of each year. The grant amounts, to be determined by the state’s commissioner of education, can reach up to $1,500 per student per school year.

The grant program is funded only for the 2016-17 biennium; additional appropriations would be needed to continue the program in 2018 and beyond. The following LBB estimate assumes complete use of the grant funding in 2016 and 2017, and thereafter, a renewal of the program and participation by three-quarters of all eligible students at the maximum available rate. Some administrative costs are included as well.

SB 20 also changes the data collection process for the state’s centralized accounting and payroll/personnel system (CAPPS). Before SB 20, agencies using CAPPS’ financial tools could submit data on contracts to the system; now they must provide specific contract data to CAPPS, including statements of work, financial information and summaries of the processes used to award each contract. At present, 10 state agencies use CAPPS-Financials; by the end of fiscal 2017, the Comptroller's office anticipates that about 50 agencies will be using CAPPS for their financial system, accounting for 87 percent of all state agency spending.

The bill also requires the State Auditor’s Office to consider auditing Health and Human Services Commission contracts that exceed $100 million annually. Still other SB 20 transparency measures include required posting of contract information on state agency websites; increased ethics training; and a two-year prohibition on any vendor employment of former state workers who participated in purchases made with that vendor. The bill also outlines updated policies and procedures for higher education contracts.

Moreover, the Comptroller’s office and Governor’s Office will work together to study the feasibility of consolidating state purchasing functions and reducing the number of vendors that work with the state.

According to LBB, the sheer number of state contracts and vendors in Texas makes it difficult to “cost” this bill. The agency also notes that the vendor rating system may lead to protests and lawsuits, but these cannot be quantified because the Comptroller has not yet adopted rules and evaluation criteria for the ratings. LBB’s cost estimates assume higher administrative costs for the revised vendor performance tracking system and additional legal assistance at the Comptroller’s office, as well as additional agency costs associated with posting contract information online.

Due to increased population growth and ongoing maintenance and construction needs, increased transportation funding was a critical goal of the 2015 session.

Texas has long taken pride in the nation’s most extensive roadway system. Due to increased population growth and ongoing maintenance and construction needs, increased transportation funding was a critical goal of the 2015 session.

Senate Joint Resolution 5 calls for a constitutional amendment that would dedicate some state sales tax and motor vehicle sales tax revenues to the State Highway Fund; the resolution will go before Texas voters on Nov. 3, 2015. If voters approve this amendment, in fiscal 2018 and thereafter the Comptroller will credit to the Highway Fund up to $2.5 billion annually from net sales tax revenue that exceeds the first $28 billion of revenue collected.

Beginning in fiscal 2020, the Comptroller will also transfer to the Highway Fund 35 percent of each year’s net revenue from the motor vehicle sales tax that exceeds the first $5 billion of revenue collected. The funds must be used for building and maintaining public roadways, acquiring rights of way or repaying bonds issued for highway improvement projects.

This bill will have a negative impact on the General Revenue Fund, the usual destination for these tax revenues, but a positive one on the State Highway Fund. A relatively small cost in fiscal 2016 represents the funds needed to publish the resolution to be put before voters.

For more information on specific bills of the 2015 Legislature, visit the Texas Legislature online. FN