Unless you’re filling up, you probably don’t give much thought to motor fuels — and even less to the taxes assessed on them. Yet these indispensable products are an important source of revenue for the federal and state governments. 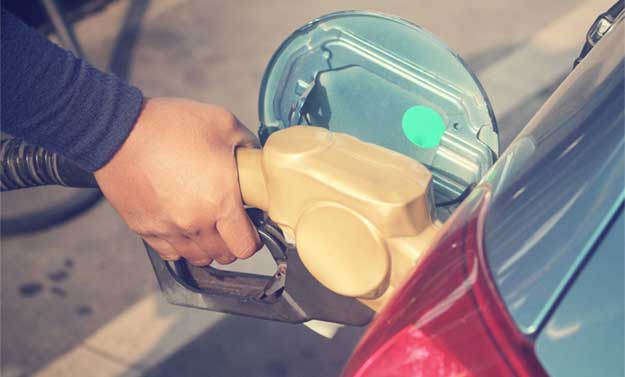 Texas is a big state, and getting around it burns a lot of fuel. Texans use about 13 billion gallons of gasoline and 4.5 billion gallons of diesel fuel each year, as well as much smaller amounts of various alternative fuels such as compressed and liquefied natural gas. According to federal statistics, only eight nations used more gasoline and diesel than Texas in 2012.

That adds up to significant revenue for the state. Texas motor fuels taxes generated more than $3.4 billion in fiscal 2015, making them the fourth-largest source of state tax revenue.

Nearly all states, including Texas, use the bulk of this revenue for transportation projects. Under the Texas Constitution, after refunds and collection costs are subtracted, three-quarters of the state’s motor fuels tax revenue is used to build and maintain public roadways. The remainder goes to the state’s Available School Fund, which supports public education.

How It Began: the Auto Era

The need for more and better roads inevitably led to taxation to fund them. According to the Federal Highway Administration, just four states — Colorado, New Mexico, North Dakota and Oregon — had a motor fuel excise tax in 1919. A decade later, every state had some form of the tax. The federal government adopted its own motor fuels tax, at one cent per gallon, in 1932.

In 1931, the state defined the term “gasoline” to include any other product that could be used to power a motor vehicle on Texas highways. A decade later, Texas adopted separate tax rates for the three primary types of motor fuel we still recognize today: gasoline, diesel fuel and liquified gases. The initial diesel rate was set at 8 cents per gallon, while liquefied gases were taxed at 4 cents. Gasoline remained at 4 cents (Exhibit 1).

In Texas, motor fuel is taxed as it is withdrawn from a storage facility, commonly called a “terminal rack” or rack, which is usually its first stop after leaving the refinery. From the rack, the fuel either is trucked directly to gas stations and convenience stores, or shipped by truck or pipeline to a wholesale distributor

As Exhibit 1 illustrates, Texas’ tax rates on gasoline and diesel have been remarkably stable in recent years, remaining at 20 cents per gallon since 1991.

Long periods of unchanging rates have been common. Gasoline stayed at 4 cents per gallon for 26 years and 5 cents for 29 years. In the latter 1980s, however — an economically turbulent period in Texas due to an oil bust — gas tax rates rose sharply, from 5 cents per gallon in 1984 to 20 cents in 1991. Diesel rates more than tripled in the same period, from 6.5 cents to 20 cents per gallon.

Federal law requires the use of red dye, added at the rack, to maintain the distinction between taxable and nontaxable diesel. Red dye signifies that the fuel is intended for off-road uses, such as the powering of farm and construction equipment — a bulldozer, say. The only diesel fuel appropriate for on-road use is undyed, clear diesel.

Diesel, like gasoline, is taxed when first withdrawn from the rack, but state law places more limits on statutory refunds of the diesel fuel tax. For this reason, in Texas tax-free withdrawals of diesel from storage are more common than refunds on diesel taxes. Even so, such refunds are issued as needed; for example, a public school bus may be obliged to use clear diesel on a school trip. The school district would be eligible to receive a refund after purchasing the fuel.

Among the 10 most populous states, Texas ranks in the middle in terms of both its gasoline and diesel tax rates (Exhibit 2). Florida has the lowest rates, while Pennsylvania has the highest.

The primary tax rates, however, don’t always tell the entire story. Many states add additional taxes, fees or charges to the main tax, significantly raising the final price of fuel at the pump. Texas doesn't. When all government levies on gasoline and diesel are considered, the ranking appears quite different (Exhibit 3).

In Exhibit 2, for example, Florida appears to have the lowest tax rates on gasoline and diesel. In fact, though, the state imposes other levies on motor fuel, including the state sales tax, a state transportation system tax and other assessments. These add-ons, according to the U.S. Energy Information Agency (EIA), equate to an additional 26.6 cents in levies per gallon of gasoline, and 29.7 cents per gallon for diesel.

Among the 10 largest states, five — California, Florida, Illinois, Michigan and New York — add sales tax to the price of fuel at the pump.

Florida also adjusts its tax rates to compensate for inflation. North Carolina plans to link its rate to population growth and the Consumer Price Index (CPI) in 2017. Michigan will link its rates to the CPI beginning in 2022.

Some states also have local-option taxes and/or fees, although these are not presented in the exhibits.

When total levies are considered, Texas’ taxes on gasoline and diesel are the lowest among the 10 largest states. Adding in the federal tax, Texans pay 38.4 cents in taxes for every gallon of gasoline they buy, and 44.4 cents per gallon for diesel. Pennsylvanians, by contrast, paid roughly twice as much in 2015, at 70 cents and 89.7 cents per gallon, respectively.

Out of the $3.4 billion collected in state motor fuels taxes in fiscal 2015, net revenue from the gasoline tax totaled nearly $2.6 billion; diesel accounted for $860.9 million; and other motor fuels, such as liquefied and compressed natural gas, brought in the remaining $5.1 million. Gasoline and diesel thus made up more than 99.8 percent of all motor fuel receipts, with gasoline alone comprising about three-quarters of the entire amount.

While motor fuels taxes still comprise an important part of Texas tax collections, their share has declined sharply over the decades.

While motor fuels taxes still comprise an important part of Texas tax collections, their share has declined sharply over the decades. In 1960 — prior to the enactment of the Texas sales tax — these taxes contributed more than a quarter of the state budget (Exhibit 4). Interestingly, this decline occurred even though the tax rates quadrupled, a pattern attributable to a variety of factors including increasing sales tax rates and the Legislature’s extension of the tax to more goods and services.

In Texas and many other states, motor fuels tax collections have begun to fall behind in their ability to meet the ever-rising cost of the transportation projects they support. Federal motor fuels taxes face the same problem; a 2009 Congressional study found that, “Because it is not adjusted for inflation, the federal gas tax has experienced a cumulative loss in purchasing power of 33 percent since 1993.”

Similarly, the Texas A&M Transportation Institute’s (TTI’s) 2016 publication Gas Tax Facts states that, “Because of inflation, we have less and less money available to pay for roads and bridges.” In 2015, TTI reported to a Texas legislative committee that the actual purchasing power of the state’s gasoline tax, set at 20 cents per gallon in 1991, had fallen to 6.8 cents by 2014 due to inflationary effects.

Meanwhile, transportation costs have accelerated dramatically. In the 10 years from fiscal 2003 to 2013, the state’s motor fuels tax revenue rose by 13.5 percent. But according to Texas Department of Transportation data, the cost of building roads and bridges went up by 83.4 percent over the same period (Exhibit 5). (Costs in road construction are rising much faster than the general inflation rate; according to the U.S. Bureau of Labor Statistics, the general rate as measured by the CPI amounted to 27 percent between 2003 and 2013.) 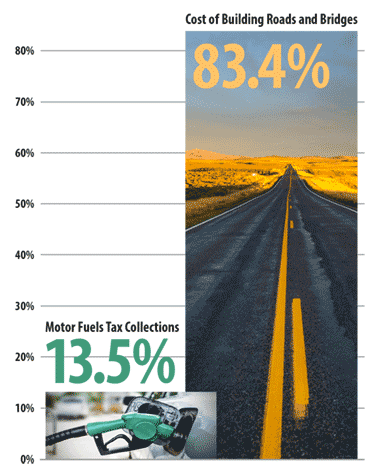 If the mismatch between the rate of growth in revenue collections and highway costs persists, motor fuels taxes will only be able to support an ever-declining amount of road and bridge construction and maintenance, even as the demand for transportation infrastructure increases.

In Texas, voters have approved recent measures to supplement road funding by drawing revenues from oil and gas production taxes, the general sales tax and the sales tax on motor fuels.

As noted above, some states have sought to boost motor fuels tax revenues with supplemental levies, inflation indexing and other measures. These methods are not without risk, however, and not only from voter disapproval. Kentucky, for instance, attempted to take advantage of once-soaring energy prices by linking its gasoline tax rate to the average wholesale price. When prices plunged, so did the tax rate and revenues, forcing the state to establish a minimum “floor” for the tax in 2015.

More information on motor fuels taxation is available under “Taxes” on this site. FN