Every two years, the Texas Legislature convenes to draft a new state budget for the upcoming biennium, balancing the need for government programs against the funding available to meet them. 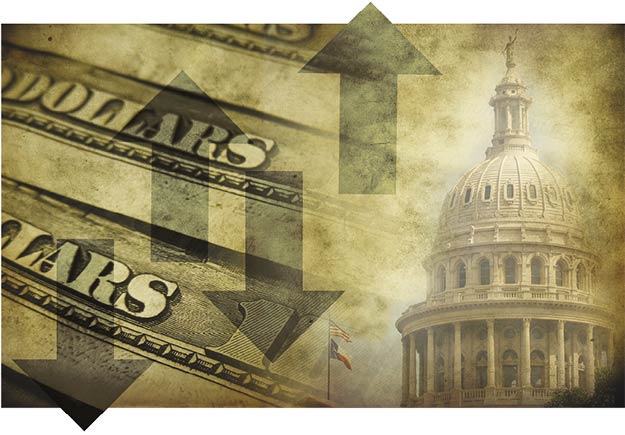 And while the Texas economy delivers a generally dependable stream of revenue to state coffers, collections of the various taxes comprising that revenue stream can and do vary from year to year, sometimes quite dramatically.

This “volatility” makes the Comptroller’s job of estimating future tax revenues challenging — and calls for extra care when legislators write the state’s budget.

Some taxes are more volatile than others — a lot more.

Texas’ motor fuels, cigarettes and alcohol taxes are all examples of more-or-less stable taxes, with relatively steady and predictable revenue growth from year to year.

Other taxes, however, can be highly volatile, and difficult to forecast. To anyone who followed the roller coaster ride of Texas’ recent shale boom and its aftermath, it will be no surprise to learn that our oil and natural gas production taxes are by far the state’s most volatile major taxes.

This “volatility” makes the Comptroller’s job of estimating future tax revenues challenging — and calls for extra care when legislators write the state’s budget.

Some taxes are more volatile than others — a lot more.

Texas’ motor fuels, cigarettes and alcohol taxes are all examples of more-or-less stable taxes, with relatively steady and predictable revenue growth from year to year.

Other taxes, however, can be highly volatile, and difficult to forecast. To anyone who followed the roller coaster ride of Texas’ recent shale boom and its aftermath, it will be no surprise to learn that our oil and natural gas production taxes are by far the state’s most volatile major taxes.

A recent Comptroller report to the Legislature gauged the relative volatility of Texas’ major revenue sources through an index (Exhibit 1). In this index, a value of zero would represent a tax showing no volatility at all, producing returns that never deviate from longer-term trends. No such tax exists, of course. A higher index value indicates greater relative volatility — more deviation from the tax’s historical trend over time.

Could a national “Rainy Day Fund” be the answer to addressing tax volatility?
Read more.

Different taxes are affected by different aspects of the Texas economy and population, as well as other factors such as legislation and changing consumer preferences.

In Exhibit 1, note the gap between energy production taxes and the other major taxes. Oil and gas tax collections are highly dependent on market prices, global economic conditions, the actions of other producing nations, consumer demand and the emergence of new production technologies, making for extreme volatility.

Texas’ motor fuels taxes are our least volatile major taxes, with an index value of just 2.5. In the last 20 years (fiscal 1996-2015), gasoline tax collections correlated closely with the steady growth of the state’s population; more people equaled more cars on the road. In this period, the Texas population grew at an average annual rate of 1.9 percent, while gasoline tax revenues rose by 1.6 percent annually.

Alcoholic beverage taxes, with a 5.7 index, are affected by several factors. Alcoholic beverage excise taxes levied on wholesalers are driven largely by population growth, but consumer preference plays a role as well. Consumers have begun shifting away from traditional, mass-produced beers and toward craft ales and beers (often with greater alcohol content, and thus classified as malt liquors for tax purposes) as well as wine and spirits. Collections of the various excise taxes are reflecting this shift. Changes in mixed beverage tax collections, by contrast, largely follow personal income.

The sales tax, our largest source of tax revenue, is moderately volatile, with an index of 6.8. It has a strong relationship with nominal (that is, unadjusted for inflation) gross state product and with personal income. These are considered the most comprehensive measures of the Texas economy, making sales tax collections an implicit gauge of economic conditions. It’s significantly better as a long-term measure, however. Sales taxes can be relatively volatile in the short term, as consumers tend to delay discretionary spending during recessions and accelerate spending during recoveries.

Insurance taxes, with a collective index of 7.7, illustrate the effects government actions can have on tax collections. In 2012, the Texas Health and Human Services Commission began moving the majority of its fee-for-service Medicaid caseload, which is not subject to our insurance premium and maintenance taxes, to Medicaid managed care, which is taxed. Large increases in insurance tax collections in recent years are due in part to this change.

Motor vehicle sales and rental taxes are significantly more volatile (12.0). Like the general sales tax, they're affected by general economic conditions, and consumer caution in downturns may be even greater for big-ticket items such as automobiles. Motor vehicle sales tax collections fell by 24 percent in 2009 due to the Great Recession, as job losses and economic uncertainty caused Texans to forego or delay vehicle purchases. The subsequent recovery saw double-digit collection gains in 2011 and 2012.

To forecast tax revenue, the Comptroller’s revenue estimators must extrapolate from current collection trends, adjusting for any changes to the tax base. This process works well when collections grow at a fairly consistent rate, as with “stable” taxes such as the motor fuels, tobacco and alcohol taxes.

Highly volatile taxes, however — most conspicuously the oil and gas production taxes — can be extremely difficult to forecast.

Another way to consider tax volatility is to compare it to the other side of the budget equation, the demand for services and the revenue needed to fund them. Texas’ major taxes are far more volatile, more likely to ebb and flow each year, than are the general state economy and Texans’ demand for government services (Exhibit 2).

This exhibit compares the volatility of Texas’ major taxes both with measures of the general economy — population, inflation, personal income and gross state product — and with some of the major needs driving the state budget, such as public school enrollment and Medicaid caseloads.

The average deviation from the compound average growth rate represents the average of the positive or negative deviations away from the average for six two-year state budget periods — in the case of Exhibit 2, from the 2004-05 biennium to 2014-15.

* Based on current dollars (unadjusted for inflation)
** Analysis from 2008-09 to 2014-15, for the margin-based tax; adjusted for tax-rate reductions.

Say for instance that for any six consecutive biennia, the compound average growth rate was 2 percent. The actual percentage growth from one biennium to the next was:

Given the 2 percent average, the average deviation could be calculated by looking at the amounts by which the biennia diverge from that figure:

Note the way most taxes, and total tax collections, cluster at the bottom of Exhibit 2, showing the highest deviation from average growth. By contrast, the growth of the general population and the public school student body, and of economic factors such as personal income and medical costs, appears remarkably steady.

Our revenue sources are more volatile than our needs for that revenue.

When making policy decisions, Texas legislators must always consider the volatility of our largest taxes. A successful November 2014 constitutional amendment (PDF), for instance, shifts a significant portion of oil and gas production tax revenues deposited in the state’s “rainy day fund” to the State Highway Fund, to supplement funding for state transportation needs.

This dedication of funding, however, occurred just as state revenues from energy production were beginning to falter due to sharp declines in market prices. The rainy day fund, and thus the Highway Fund, will not receive any natural gas production tax revenue in fiscal 2017 due to the level of fiscal 2016 collections, although some oil production tax revenue will be transferred.

An additional supplement to transportation funding came in November 2015, when voters approved another constitutional amendment, Proposition 7. This amendment directs the Comptroller’s office to deposit the first $2.5 billion in state sales taxes collected in excess of $28 billion to the Highway Fund each fiscal year (or $5 billion each biennium), beginning in fiscal 2018. The sales tax, again, is only moderately volatile. Yet Proposition 7 also calls for the dedication of some motor vehicle sales taxes to transportation beginning in fiscal 2020, and this tax is the most volatile of Texas’ important taxes other than oil and gas production levies.

Given the rapid growth in Texas’ population and infrastructure needs, any loss of dollars going to the Highway Fund is likely to draw the attention of both legislators and the public. It’s a situation that illustrates the continuing challenge of matching volatile revenue sources with the steady growth of state spending needs. FN

For more information on the volatility of Texas taxes, read the HB 32 report (PDF). FN