Texans have a long and proud military tradition, and have distinguished themselves in every conflict since there was a Texas. But for many communities throughout the state, the military isn't just a focus for pride. 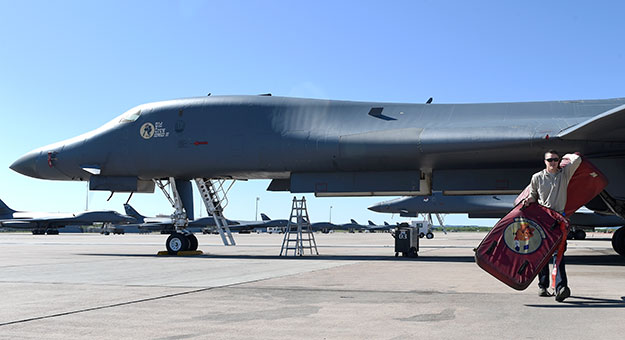 B-1 flight prep: Flight preparation begins for a B-1B Lancer at Dyess Air Force Base.
Photo courtesy of the U.S. Air Force

Texas Comptroller Glenn Hegar recently visited a number of Texas military installations to announce the results of a new study that quantifies the economic benefits Texas derives from the presence of these facilities in our state.

In many areas, the installation is an essential part of the local economy — and of the community.

“We owe a huge debt to those who serve, and we reap the benefits of their presence every day,” says Hegar.

Let’s take a look at some of the detailed findings of the Comptroller study.

Established in 1848 to defend the nation’s new border after the Mexican War, today Fort Bliss is one of the Army’s fastest-growing bases, with $6 billion in new construction in recent years. It’s a major soldier training center and, since 2011, home to the First Armored Division, also known as “Old Ironsides.”

Fort Bliss is also a prime example of cooperation with the community. The base partnered with the city of El Paso to create the world’s largest inland desalination plant, which now provides fresh water for the city and the base.

It’s also a testbed for the military’s commitment to alternative energy sources. In January 2016, Fort Hood began the Army’s largest renewable energy project, an on-post solar farm with 63,000 solar panels as well as an off-site wind turbine farm that together will supply about 40 percent of the post’s energy needs.

Fort Hood is the state’s largest single-site employer, with nearly 60,200 military and civilian personnel on staff. In 2015, it supported nearly 202,000 Texas jobs and generated $12.2 billion in disposable personal income. In all, the base was responsible for about $35.4 billion in economic activity and contributed $21 billion to the 2015 GSP.

Joint Base San Antonio (JBSA), the nation’s largest joint base (serving multiple branches of the military) was created in 2010 by the administrative merger of Lackland Air Force Base, Randolph Air Force Base and the Army’s Fort Sam Houston.

JBSA occupies about 46,500 acres on 11 sites in the San Antonio area. Its multiple missions include flight training, cyber operations and military intelligence. It trains more students than any other Department of Defense installation, and is also home to the Brooke Army Medical Center, the military’s largest hospital, with its only level-one trauma center and burn center.

NAS Corpus Christi, located six miles southeast of the coastal city, is home to the U.S. Navy’s Naval Air Training Command, serving student pilots from the Navy, Marine Corps and Coast Guard as well as foreign nations. The base began turning out freshly minted pilots in 1941 and produced more than 35,000 naval aviators during World War II.

Today, the base also hosts other units, including the U.S. Customs and Border Protection Service, Coast Guard civilian search and rescue and maritime surveillance operations and the Army’s Corpus Christi Army Depot (see below).

In 2015, NAS Corpus Christi directly employed nearly 4,400 and supported more than 12,900 Texas jobs, generating about $799 million in personal income. The installation was responsible for $2.1 billion in economic activity and nearly $1.3 billion in GSP.

Naval Air Station Joint Reserve Base Fort Worth (NAS Fort Worth JRB) occupies the site of the former Carswell Air Force Base, one of the nation’s most important Strategic Air Command bases during the Cold War. It became the nation’s first joint reserve base in 1994, created through the relocation of numerous Navy Reserve, Marine Corps, Air Force Reserve and Air National Guard units following a recommendation by the U.S. Base Realignment and Closure Commission.

NAS Fort Worth JRB was established in 1932 as Tarrant Field. Today, its primary mission is providing training and support for reservists and guard members from all branches of the armed services. The facility hosts units of the Navy, Marine Corps, Air Force, Army and Texas Air National Guard on 2,300 acres within the city limits of Fort Worth. Its Air National Guard 136th Airlift Wing participated in relief efforts after several major hurricanes, including Katrina, Rita and Ike.

Dyess Air Force Base (AFB), located on 5,303 acres just west of Abilene, is the “home of the B-1 bomber,” with the B-1B Lancer-equipped 7th Bomb Wing as well as the Air Force’s only formal B-1 aircrew training unit.

Dyess AFB also hosts the nation’s largest C-130 Hercules transporter group as well as operations, staffing and maintenance functions. It provides medical care for more than 12,000 military retirees as well as military personnel stationed at the base and their dependents. It’s the largest single employer in Abilene, with nearly 5,400 military and civilian employees.

In 2015, Dyess supported about 20,200 Texas jobs and produced $1.2 billion in personal income. It generated nearly $3.7 billion in economic activity and added $2.1 billion to the state’s GSP.

Dyess AFB is known as the “Home of the B-1.” It boasts the Air Force’s only formal B-1 bomber air crew training unit.

NAS Kingsville opened its doors in 1942, as an auxiliary to NAS Corpus Christi that trained pilots in gunnery, dive bombing and anti-submarine warfare. Today, the 16,000-acre site produces half of all new Navy and Marine tactical pilots each year. The base also hosts several major contractors including L-3/Vertex, Rolls Royce, LB&B and Fidelity Technologies, which provide aviation maintenance and logistics support, engine maintenance, flight simulator maintenance and simulator training, respectively.

About 1,300 civilian, contractor and military personnel work at NAS Kingsville; in all, the base supports more than 4,500 Texas jobs and contributed nearly $289 million in disposable personal income in 2015. In that year, the installation generated $712.1 million in economic output and added $435.2 million to Texas GSP.

Goodfellow AFB is the home of the 17th Training Wing, which provides advanced education in intelligence, surveillance and reconnaissance for Air Force, Army, Navy and Marine Corps personnel as well as students from civilian federal agencies and 40 allied countries. The base also provides fire protection training for multiservice personnel.

Established in 1940 on 1,002 acres near San Angelo, Goodfellow began as a flight training center but now focuses on security and intelligence training, as well as the nation’s only military firefighting school, the Louis F. Garland Department of Defense Fire Fighting Academy.

Goodfellow maintains close ties with San Angelo and Tom Green County. The city of San Angelo, for instance, provides ambulance services to the base, while Goodfellow helps the city maintain and repair its firetrucks and allows city firefighters to train at the base.

Goodfellow employs an estimated 16,605 Texans either directly or indirectly. It generated $976 million in personal income and $3 billion in economic activity in 2015. In all, the base added almost $1.8 billion to Texas GSP in 2015.

The military installations based in Texas play multiple roles. They’re vital to our national security. They train soldiers, sailors and airmen. They provide medical care and other essential services for those associated with the installations. And they represent a potent economic asset for our state.

“Each Texas installation plays a pivotal and strategic role in our nation’s defense,” says Comptroller Hegar. “But they also provide an enormous economic benefit to our state. They employ thousands of Texans and spend millions for supplies and equipment, while forging close ties with their neighbors in everything from adopt-a-school programs to emergency aid.” FN