Capt. Justin Scott takes a sip of his 7-Eleven coffee, his third of the evening. “Tonight’s the night,” he says — with eyes red from exhaustion. He’s spent the last three nights in a van in West Texas just waiting… waiting for his targets to show up. “It’s gonna be different tonight,” he says, encouraging his team with pats on the back. He sits down, takes another sip and waits.

This isn’t a scene from Law and Order — it’s a story about the Comptroller’s Criminal Investigation Division (CID), a small group of law enforcement officers and other staffers who investigate cases of tax fraud. Their beat is the entire state of Texas.

Texans may hate paying taxes, but we hate it even more when others don’t pay their fair share. As Comptroller Glenn Hegar likes to say, “People who commit tax fraud are cheating their own next-door neighbors, who end up paying more in taxes to make up for the deadbeats.”

CID’s officers conduct sting operations, stakeouts, inspections and arrests. Each receives an average of 85 hours of training annually in areas ranging from mental health awareness to active shooter preparation. CID Chief Jim Harris has more than 35 years of experience in law enforcement, including stints with the Houston and Bellaire city police departments as well as training at the FBI National Academy.

With only 22 sworn law enforcement officers for the entire state, or about one for every 13,000 square miles, CID has a lot of work to do and even more ground to cover. They spend much of their time on the road, in their personal vehicles, working cases in multiple cities. One CID officer, for example, works cases in Abilene, Midland, Odessa, Lubbock and Austin as well as smaller communities.

The agents’ day-to-day responsibilities vary, and after hours, they still have work to do. As sworn peace officers, they’re never truly “off the clock,” as they’re required to make arrests when they witness qualifying situations.

With only 22 sworn law enforcement officers for the entire state, CID has a lot of ground to cover.

“These may be white-collar crimes, but they still cause harm to taxpayers,” says Chief Harris. “There’s a small percentage of people and businesses that try to evade Texas tax law, and that’s who we’re going after.”

CID investigations often begin with a tip — from employees privy to illegal actions, companies noticing suspicious activity or even ex-spouses wanting revenge. Because the crimes they investigate can involve multiple areas of the law, CID routinely works with agencies including the Drug Enforcement Administration, Department of Homeland Security, FBI, Texas Department of Public Safety, sheriffs’ offices and local police departments.

CID brings a big advantage to these collaborative investigations because it has jurisdiction other law enforcement agencies lack. For example, CID can enter the store or office of any person or company permitted to do business in Texas to verify its tax documents, confirm sales receipts and identify owners and employees — information other agencies may need and can’t easily obtain otherwise. Other agencies, in turn, can assist CID with their own investigative resources and personnel.

Once a tax fraud arrest is made, CID begins seeking an indictment. Texas’ tax laws are complex, and prosecutors aren’t necessarily familiar with their idiosyncrasies, so CID officers often must prepare case documents and educate attorneys on the case and the law.

CID’s investigations usually bear fruit: all of their felony suspects brought before grand juries in fiscal 2016 were indicted. And that wasn’t a fluke, either. It’s happened three times in the past five years, and the other two years had 93 percent and 98 percent indictment rates.

In addition to the potential for jail or prison time, convicted tax offenders often are obligated to pay penalties, fees and forfeitures — nearly $5.7 million in the last four years (Exhibit 3). (Forfeitures involve the seizure of proceeds and property used in the commission of a felony.)

Criminal courts in tax cases also can order restitution to be paid to the state for unpaid taxes, or to a crime victim (such as an owner of stolen fuel), as part of a judgment. Texas courts have ordered nearly $4.5 million in such restitution since fiscal 2013, and more than $2.5 million was received in this period.

Exhibit 3: Amount Collected from Penalties, Fees and Forfeitures, Fiscal 2013 to 2016 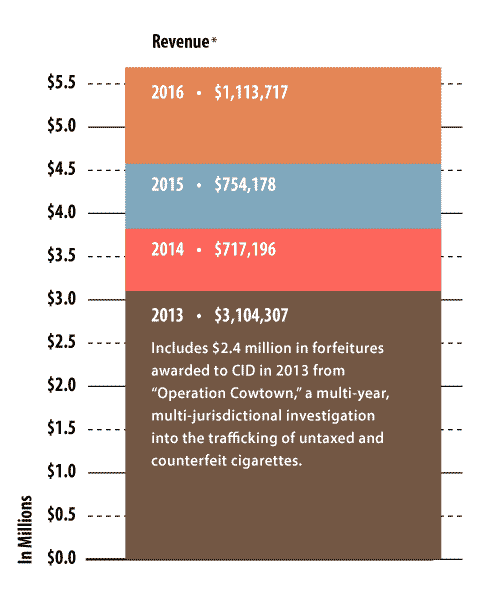 * Also includes some delinquent taxes recovered.
** Includes $2.4 million in forfeitures awarded to CID in 2013 from “Operation Cowtown,” a multi-year, multi-jurisdictional investigation into the trafficking of untaxed and counterfeit cigarettes.

This pattern reflects the division’s increasing focus on this offense, a second-degree felony. One common crime in this area involves the theft of motorists’ credit card information, which can be stolen in a number of ways, from the purchase of card numbers on the black market to the use of “skimmers,” illicit card readers surreptitiously installed on gas pumps. Thieves load the card numbers they acquire onto any card with a magnetic strip, even a gift card, and use it to steal fuel.

In another variation, thieves can electronically manipulate the pump’s “pulsar,” the part that decides how much to charge your card. This can allow them, for instance, to take 100 gallons of fuel for a charge of $5. Then, to maximize their profits, they sell the fuel. This crime is so common that one CID officer made five arrests within 48 hours at the same gas station, most in broad daylight.

Another way to evade motor fuels taxes is considerably lower tech: lying. If a Texas company purchases fuel and claims it’s going to be shipped to another state or country, it isn’t required to pay taxes on it; if it sells the fuel in Texas instead, it’s tax fraud.

And yet another common motor fuels tax crime involves “dyed diesel.” Diesel meant for non-road use in farm and construction equipment isn’t taxed. Since 1994, federal law has required such diesel to be dyed a bright red to make the distinction clear. Using dyed diesel on the highway, or knowingly selling it for such a use, is tax fraud. Under Texas law, CID officers can legally stop any vehicle on a public road to check for dyed diesel in its tank.

Various studies have attempted to estimate how much states lose due to illegal cigarette sales. One study says U.S. evasion rates average between 5.3 percent and 7.6 percent; other estimates range even higher. The black market for cigarettes is substantial, in any case, and CID officers conduct regular inspections of tobacco retailers to ensure compliance.

Game rooms — locations with “eight-liners” and other variations on slot machines — are legal in Texas if they don’t pay cash prizes. Many do, though, presenting an ongoing challenge for law enforcement.

CID doesn’t investigate gambling, but it does have jurisdiction concerning the taxes levied on these machines. Each is supposed to have a current tax decal issued by the Comptroller’s office (costing $60 annually), securely attached and visible.

CID officers can enter any game room during normal business hours to verify all machines are in compliance. If they’re not, Texas is owed a minimum of $610 per machine. A recent gambling bust on a game room with more than 300 machines, for instance, found about 60 that weren’t in compliance with the occupation tax, yielding $36,600 for the state.

Patience is a virtue, especially for cops. When the trucks pulled up, the lieutenant whispered, “There they are,” leaning forward with anticipation. Several men got out of the trucks; one went to manipulate the fuel meter while others got ready to pump fuel. They’d stolen thousands of gallons of fuel from this fueling location for commercial vehicles before the company noticed the losses and contacted CID for help. A slight grin appeared on Scott’s face. “Ok,” as he looks toward his men, “Let’s go get ‘em.”

This case is still ongoing, but a felony indictment is expected. After the arrests that night, Scott got home at 5 a.m., took a quick nap — and got back to the office in time to start filling out paperwork. FN

To learn more about the work of CID, visit the Criminal Investigation Division on this website.