For more than a century, the 48-mile-long Panama Canal has connected the Pacific and Atlantic oceans, greatly increasing Texas’ access to world markets. In 2015, more than a quarter of all ships passing through the canal originated from or called at the Port of Houston, generating an annual trade impact of $137 billion. 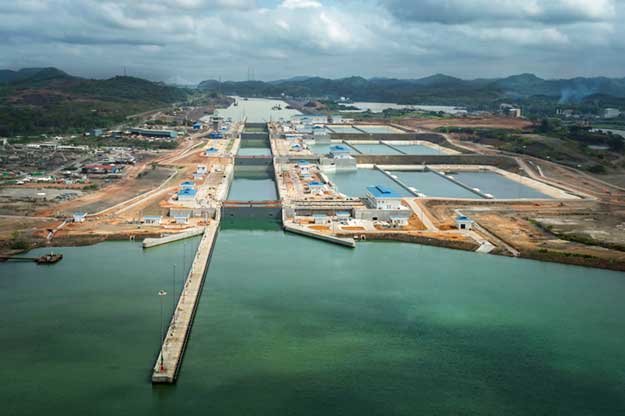 But while the need for the canal hasn’t changed, the ships have. Today’s enormous cargo ships and “supertankers” dwarf the ones that traversed the canal when it first opened in 1914.

The completion of a decade-long, $5.3 billion Panama Canal expansion project in 2016, with new locks, wider and deeper ship channels and higher maximum operating water levels, has increased the canal’s capabilities to handle larger ships — and could open new opportunities for Texas ports.

About $204 billion in international trade passed through Texas seaports in 2015, and any substantial increase in that trade could add billions to the state economy.

While the idea of a Central American canal linking the Pacific with the Atlantic had existed since the 16th century, it became reality only after a revolution in Panama and a 10-year construction project — both events facilitated by U.S. President Theodore Roosevelt. Considered “a testament to American engineering” at the time, the canal quickly became a vital part of the world economy. More than 815,000 vessels have carried goods and people through its locks since 1914.

The canal and surrounding lands remained fully under U.S. administration until 1978, with the ratification of a treaty calling for gradual transfer of control to Panama. On Dec. 31, 1999, the canal zone was ceded entirely to Panama.

Understanding that many modern vessels were now too large to make use of the canal, Panamanian authorities made plans for much-needed improvements. In 2007, Panama began the mammoth endeavor of enlarging the canal and building a larger lock system capable of handling what are now called “Neo-Panamax” ships, doubling the canal’s capacity. The project, plagued with delays and cost overruns, took almost exactly as long as the canal’s original construction.

The June 2016 completion of the expansion project is expected to have direct impacts on the economy of the U.S. as a whole — and particularly on Gulf Coast and East Coast ports.

A recent report by the Boston Consulting Group estimates the greater efficiencies of Neo-Panamax ships could lower shipping costs from East Asia to the East Coast by as much as 30 percent, and this in turn could shift up to 10 percent of Asian container traffic away from congested West Coast ports to the Atlantic seaboard. (West Coast ports currently receive about two-thirds of all cargo from Asia.)

Texas ports could benefit as well — if they’re ready.

Shipping economics, including the rise of containerized cargo, have driven a trend toward ever-larger vessels for decades. A special nomenclature describes these gargantuan ships, some of them literally a quarter-mile long.

Prior to the Panama Canal expansion, the largest vessels able to traverse the canal were called “Panamax” ships; those too large to pass through were called Post-Panamax ships.

The Panama Canal – A History in Numbers

America’s work on the Panama Canal followed a failed attempt by the French government begun in 1880. Estimates of worker deaths during this earlier project range from 22,000 to more than 30,000, primarily due to yellow fever and malaria.

During the course of the project, more than 56,300 people worked on the canal, including about 11,000 Americans.

The Panama Canal opened on Aug. 15, 1914. Its construction required the excavation of nearly 240 million cubic yards of earth and cost the U.S. about $400 million. Allowing for inflation, that equates to about $9.7 billion in today’s dollars.

Any significant increase in international shipping through Texas ports may have to wait for port expansions, however.

Unlike some other ports on the Gulf and the East Coast, at present Texas seaports can’t accept fully loaded Neo-Panamax ships. In a November 2016 report (PDF), the Texas Senate Select Committee on Ports noted: “To take advantage of the Panama Canal expansion, Texas waterways must be dug deeper.”

The Port of Houston Authority plans to spend $1.6 billion on improvements in the next five years. One portion of this project will deepen the Houston Ship Channel from 40 to 45 feet, allowing access by some Neo-Panamax ships.

Given its depth and short distance to open water, Port Freeport is considered best poised among Texas ports to accommodate bigger ships traversing the enlarged Panama Canal. To allow these ships to use Port Freeport, the federal Water Resources Reform and Development Act of 2014 authorized the port to deepen its harbor channel to 55 feet, a depth capable of accommodating Neo-Panamax ships. A $30 million dredging project begun in October 2014 also will widen a 4.5-mile portion of the main channel from 400 to 600 feet.

The needs of Neo-Panamax shipping don’t end with deeper, wider harbors and channels, however.

In anticipation of the canal expansion, much recent investment in Texas’ seaports has focused on infrastructure such as larger terminals and cranes and additional storage and logistics facilities. In 2016, an American Association of Port Authorities survey found that Texas ports and their private-sector partners will invest $48 billion on capital improvements during the next five years.

An Oklahoma firm, Magellan Midstream Partners LP, has announced plans to develop a $335 million marine terminal along the Houston Ship Channel in Pasadena that will include a new marine dock capable of accommodating Panamax-sized ships when it opens in 2019. The Port of Houston has acquired four new cranes, each nearly 30 stories tall and costing $50 million, to load and unload such vessels while docked in port, and ultimately plans to add three more.

Two shipping lines will add weekly service between Asia and Houston through the expanded canal.

Port Freeport has hundreds of acres of open land available for additional development and recently completed its Velasco Terminal Berth 7, which includes two ship-to-shore container cranes with Post-Panamax capabilities. The port intends to add two more berths at this terminal.

To fully exploit Freeport’s location and capabilities, the public-private Highway 36A Coalition is supporting a Highway 36A “transportation corridor,” with expanded rail and roadway infrastructure from Port Freeport north to Rosenberg and beyond. These improvements would increase the efficiency and capacity of the transportation and logistical support network needed to move cargo from Neo-Panamax ships onto trains and trucks, and allow connections with distribution networks throughout Texas, most notably in the Dallas/Fort Worth Metroplex. 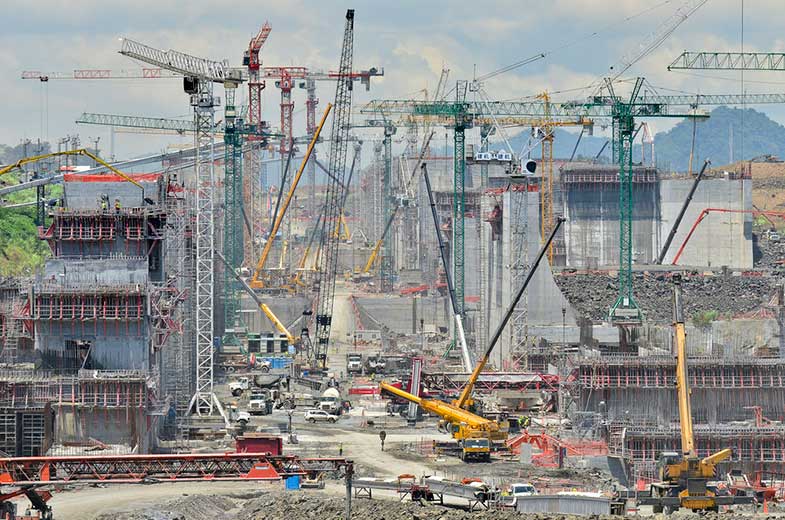 Construction on the canal expansion

The amount of additional economic activity the Panama Canal expansion will bring to Texas is uncertain. There are no guarantees of major impacts, particularly without significant upgrades to our ports and their accompanying distribution infrastructure. In a September 2016 press account, Louisiana port and economic development officials anticipated a 5 to 15 percent increase in cargo shipments.

Yet some Texas ports are already experiencing benefits from the expansion, and these should continue. In May 2016, for example, the Port of Houston Authority announced two shipping lines would add weekly service between Asia and Houston through the expanded canal.

Interestingly, the Panama Canal expansion is likely to affect exports of certain petroleum products, but not of oil itself. While the U.S. finally ended its 40-year ban on crude oil exports in 2015, much of the world’s crude moves on ships still too large for the canal.

The canal will, however, accommodate many of the vessels that typically move petrochemicals as well as liquefied natural gas (LNG). Texas produces about 28 percent of the nation’s natural gas, giving it a prime opportunity to take advantage of increased trade in LNG.

The expanded canal will cut travel times from the Gulf Coast to Asia by about 40 percent, from 34 to 20 days.

Prior to the canal’s expansion, only 6 percent of all LNG tankers could traverse the canal. Since the expansion, 90 percent can use it. Also, according to the U.S. Energy Information Administration, the expanded canal will cut travel times from the Gulf Coast to Asia by about 40 percent, from 34 to 20 days. Some reports indicate LNG exports to Asia will account for 20 percent of all cargo passing through the canal by 2020.

In anticipation of this new traffic, two LNG terminals will be operational at the ports of Corpus Christi and Freeport by 2018, with four other Texas locations awaiting final approval to break ground. It could be the start of a significant new export industry for our state. FN

The Comptroller’s office has reviewed the economic contributions of many of the state’s ports. Visit the Economic Data section to learn more. 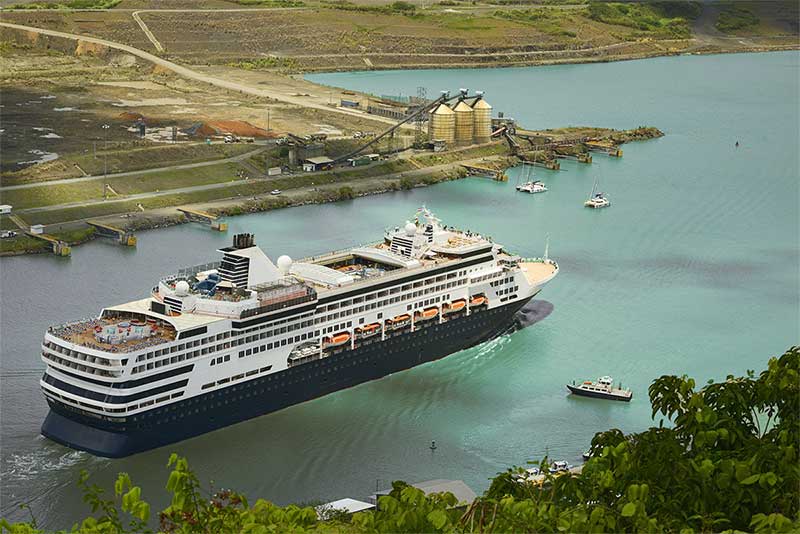