Texas Toasts A Roundup of Bright Economic News in Texas

For anyone who ever questioned where so many of the moving trucks are headed, U-Haul has an answer: in 2016, huge numbers of them were going to Texas.

In February, U-Haul ranked Texas as the No. 1 Growth State for 2016 in the company’s migration trends report. The report ranks Florida, Minnesota, Wisconsin and Missouri as Texas’ closest competitors. Illinois and California were notable as the top net-loss states.

According to U-Haul, the company ranks Growth States “by the net gain of one-way U-Haul truck rentals entering a state versus leaving a state during a calendar year.” In determining the rankings, U-Haul tabulated data from more than 1.7 million rental transactions that occurred over the year. 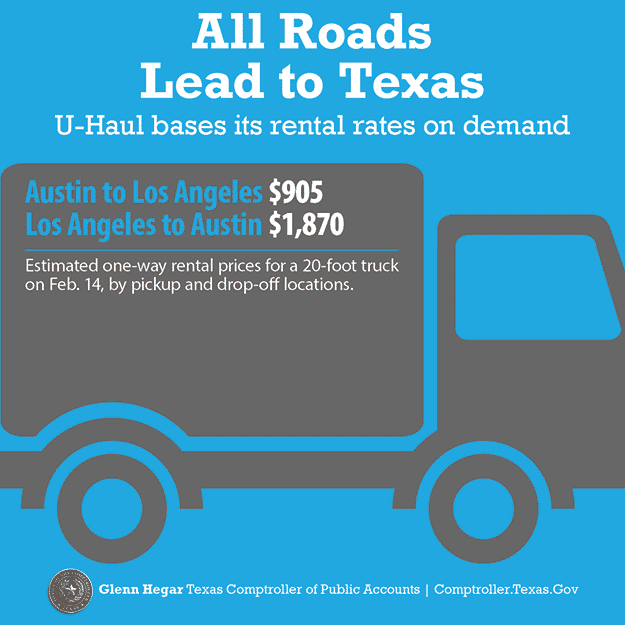 It’s not just individuals and families coming to Texas. Businesses are investing capital and expanding corporate facilities in the Lone Star State, according to Site Selection Magazine, which awarded Texas the 2016 Governor’s Cup.

Site Selection awarded Texas the Governor’s Cup based on the number of new and expanded corporate facilities in the state — 642 projects for 2016 alone. Texas placed ahead of Ohio, Illinois, North Carolina and Georgia in total projects. Nebraska received top marks in the Governor’s Cup per capita category.

With great popularity comes great demand. As individuals and businesses stream into Texas for better opportunities, the Texas Association of Realtors reports the state’s housing market has set yet another round of annual home sales and home price records.

The report states median home prices increased by 7.7 percent from 2015, while home sales volume rose by 4.6 percent in the same period.

“Last year’s record home sales activity was fueled by the momentum of multiple years’ strong job and population growth across the state, despite the fact that Texas job and economic growth began to slow in 2016,” stated Vicki Fullerton, chairman of the Texas Association of Realtors. FN

Texas Toasts is an occasional series highlighting good news in the Texas Economy.