Silicon Valley’s housing costs and declining quality of life have made North Texas an increasingly attractive destination for tech workers. 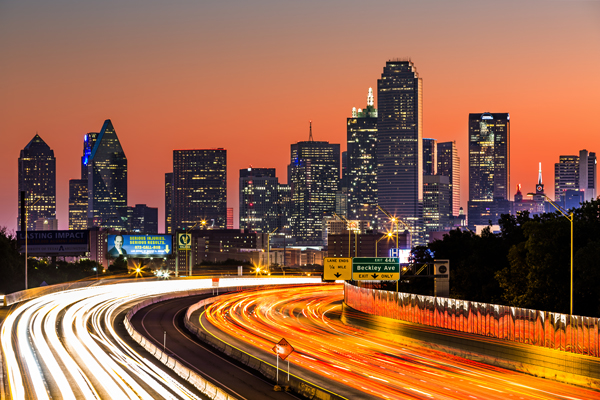 DFW, home to industry giants such as Texas Instruments, AT&T and Lockheed Martin, has a long history of technological innovation. The area’s Telecom Corridor, a first-of-its-kind cluster of high-tech businesses established in the late 1950s, laid the foundation that ultimately attracted dozens of major tech companies.

And while it’s still a popular destination for major companies, DFW is quickly becoming a hub for tech startups and entrepreneurs.

In August 2017, Business Insider called the Dallas-Fort Worth area one of the world’s most technologically advanced cities, noting “rapid growth in the number of venture capitalists and integration of technology into the city landscape.” Weighing factors such as number of startups, tech funding and smartphone use, DFW came in at number 11, up from number 28 in 2016. Dallas now ranks ahead of global hubs including Tokyo, Beijing, Shanghai and Washington, D.C.

Other tech watchdogs have taken note. The commercial real estate services company Cushman & Wakefield recently ranked DFW among the nation’s top “tech cities” based on its academic institutions, skilled workforce and vibrant entrepreneurial spirit. Another commercial real estate company, JLL, called Dallas one of five surprising cities to watch in 2017, citing factors such as low taxes, tech networks and a diverse industrial base. And marketing firm Mintigo proclaimed it one of the geekiest cities in the nation.

While DFW’s emergence as a tech hub may surprise some, others see it as a natural progression. As people become more reliant on technology, technical advancements are affecting the way companies in nearly every sector do business, from customer service to data processing to manufacturing. To keep pace in today’s global market, businesses need fresh ideas and a diverse, tech-savvy workforce.

And DFW attracts that talent. How? In part, by offering tech workers what they want but can’t get in the better-known technology hubs.

Suffocated by traffic congestion and spiraling housing costs, about half of Californians (48 percent) consider housing affordability to be an “extremely serious” problem where they live, according to the latest Berkeley IGS Poll, an annual survey of registered voters by UC Berkeley’s Institute of Governmental Studies. The majority (51 percent) of Bay Area residents feel they’re being squeezed out. Most said they’ll relocate out of state.

And millennials are leading the exodus. The vast majority (69 percent) of Californians in their 30s want to bolt, along with 65 percent of those aged 18 to 29 and 64 percent of 40-somethings. The only age group largely content to stay put are senior citizens, and 38 percent of them said they may leave. Bad news for the Golden State’s economy.

The median home price in San Francisco is now more than $1.2 million, up 11 percent in the past year alone. That’s more than six times the national median price of $202,700. With a standard down payment of 20 percent ($247,340), the monthly payment for a 30-year, fixed-rate mortgage at 4 percent interest would be nearly $6,100. Thus, even if the buyer can cough up the down payment, he or she must make about $250,000 per year to stay afloat. Not exactly the average salary for an average American home.

For most people, especially young techies, home ownership in San Francisco is simply out of reach. So, they rent. But with median rent prices of more than $4,400, saving for a 20 percent down payment could take years — or forever.

So young workers move farther away from the city center, enduring long, congested commutes in the hope of getting ahead.

For silicon refugees, DFW offers ample job opportunities and a much better quality of life: everything from big-city excitement to quiet suburbs, from walkable neighborhoods with trendy bars and retail shops to sprawling ranches and wide-open spaces.

According to the U.S. Census Bureau, DFW was the fastest growing major metro in the U.S. based on new housing starts in 2016, far surpassing the previous year’s leader, New York City. Many of these housing projects, particularly in North Dallas, are dense, multi-family and mixed-use — ideal for young professionals. Some are upscale gated communities with private gyms, pools and recreation areas; others offer all the amenities of a town center. Then there are the surrounding suburbs, filled with young families looking for a close-knit community with top-notch schools and easy access to the city.

With its affordable cost of living and tech-savvy culture, it’s easy to see why many millennials are fleeing California for a richer life in North Texas. FN