What do a former Houston cop, a tax collector and a game warden all have in common? 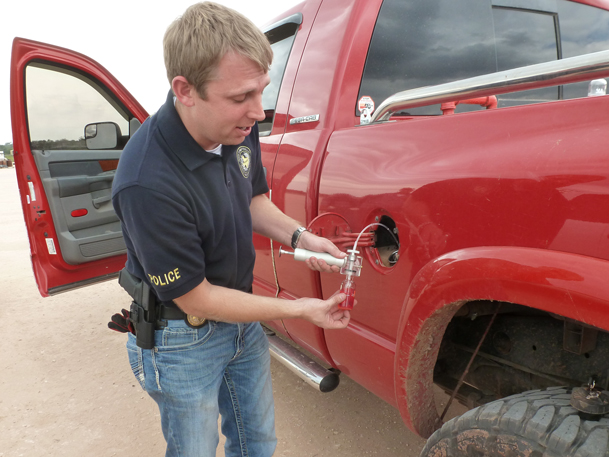 They now chase tax cheats for the Comptroller's office.

Backgrounds vary considerably among the 17 men and five women who wear the badge of the Criminal Investigation Division (CID). Investigators range from fresh-faced rookies to original members of "Bullock's Raiders," the delinquent tax "hit squad" formed in the mid-1970s by former Comptroller Bob Bullock.

Tax raids still take place, though they don't make the headlines as often these days. But the goal remains the same — a level playing field for businesses and fairness for taxpayers.

CID investigators are commissioned peace officers who can arrest and jail suspects. They're armed, CID Chief Jim Harris says, because "You never know who you're dealing with."

Even so, Harris says they mostly deal with upright citizens and business owners who simply are ignorant of their responsibilities under the state's tax laws (and no, it's still not an excuse). Harris, a 35-year law enforcement veteran who put a lot of people in jail in Houston, likes having civil options at his disposal, such as lawsuits, fines and penalties.

Unlike more conventional law enforcement, CID has inspection authority that effectively allows its agents to enter certain premises and seize some records administratively, without search warrants. They often have to follow paper trails to pursue tax criminals.

"This line of work appeals to someone who likes to dig a little deeper," says Harris, a graduate of the FBI National Academy.

Among those are Brett Froh, a former Comptroller enforcement employee now working in the Abilene CID office. He was recruited three years ago by Lt. Dickie Hass, a Bullock Raider present at CID's creation in 1992.

"He told me I'd be good at it," Froh said, so he spent about nine months at an academy in Abilene while working full time. Upon graduation, he also became a reserve deputy with the Nolan County Sheriff's Office in Sweetwater.

"You're sitting in a vehicle for hours on end, watching people and seeing if they're going to break the law," Froh says. But his CID career didn't start out that way.

"My first month on the job was bizarre," Froh recalls. Before it ended, he had investigated fuel thefts and amusement machine tax evasion and inspected the tobacco used in hookahs (water pipes).

"It was crazy trying to get your head around it all," he says.

And sometimes, the craziness comes to you.

An upset homeless man once entered Froh's office lugging a trash bag full of other people's junk mail. Pointing to the bar codes, he insisted that his identity was being stolen to obtain state permits. A police mental health officer arrived, and he and Froh assured the man he wasn't in any jeopardy. They eventually determined he was mentally ill and off his medication.

It's the variety of casework and the methodical, step-by-step investigative process that appeal to Froh. For others, it's the challenge of enforcing a different area of the law.

Kiara Nydam was a newly minted game warden when she transferred to CID from the Texas Parks and Wildlife Department (TPWD). After completing TPWD's seven-month academy last July, she decided it wasn't for her.

"I love wildlife," said the former science major, "but I never hunted when I was growing up." Now she's hunting a different kind of prey, hiding in plain sight — illegal game room operators.

Nydam, who is based in Arlington, said she was surprised by the sheer number of hidden game rooms, adding that she'd never noticed them before until she learned what to look for. Usually, they're in strip centers — her unit found six at one location — behind single, locked, unmarked doors with blacked-out windows, no signs and lots of cameras. Some are in back rooms of convenience stores.

"It's shocking how much is going on under our noses," she said. "It branches out like crazy. There's always another one."

The trick is getting through the door, so Nydam often "dresses down." Inside the darkened rooms, there's usually an armed security guard or manager. Game rooms can gross up to $25,000 a day, according to Nydam, making them prime targets for robbery.

The gaming machines usually include "8-liners" (electronic slots), online sweepstakes games offering prizes or money and coin-operated pool tables. In Texas, these "amusement" machines are taxable and must display the proper state decals showing payment of the appropriate licensing or registration fees.

"We work the tax angle," Nydam says. "It's hard to prove gambling unless there's evidence of payouts, but if they haven't paid their taxes we can shut them down that way."

As for tobacco taxes, Nydam says many convenience store operators sell cigarettes singly or use counterfeit tax stamps. Some of the contraband smokes are imported from overseas; others are brought into Texas from states with lower tax rates.

It's been quite a learning curve for Nydam, who was 24 when she signed on in the fall of 2016. She's CID's youngest hire ever and one of five current female investigators. (The fifth started on April 3.) Admittedly nervous about entering a predominantly male work environment, Nydam described the welcome she's received as amazing.

As for the work itself, especially busting illegal operations, she says. "I think it's cool." FN