Imagine purchasing a life insurance policy to ease the financial burden on your family after your passing, and faithfully paying premiums for years or even decades. But following your death, your beneficiaries never see a dime because they don’t know your policy exists. 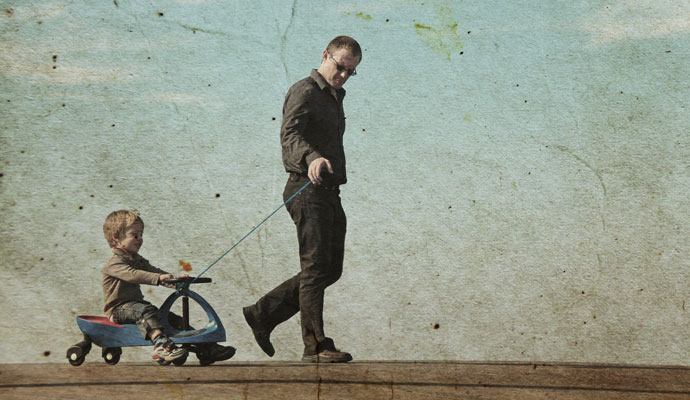 And then imagine that the life insurance company keeps paying itself premiums out of the value of your insurance, even though it may have known of your death.

For many Americans, it's been an unfortunate reality. But many states, most recently Texas, have taken steps to see this unjust scenario doesn't keep occurring.

During the 1990s, many large insurers "demutualized," or converted from mutual companies owned by their policyholders to publicly traded stock companies. To do so, some states' laws required these companies to purchase the ownership interests of their policyholders. But the insurers discovered they'd lost contact with millions of those policyholders, some of whom were dead.

The discovery provided a window into the issue of unpaid life insurance benefits and ultimately sparked the first wave of multistate unclaimed property audits. These efforts, initially spearheaded by a 2009 investigation in Florida, ultimately involved 41 states including Texas, where the audits were overseen by the Comptroller's Unclaimed Property Division.

These audits identified a significant number of policies eligible for either payment or "escheatment," the turning over of unclaimed property to the state. They also uncovered significant discrepancies in the way life insurance carriers treated their obligations to pay retirement annuities and death benefits.

Insurers routinely use the Social Security Administration's Death Master File (DMF), a database of deceased individuals in the U.S., to stop annuity payments to deceased retirees. The auditors, however, found numerous cases in which insurers failed to pay death benefits on life insurance policies even when they knew their policyholders were listed in the DMF.

In such instances, if the policy beneficiaries failed to make a claim, the companies allowed the policy to "lapse" when the deceased stopped making premium payments, often keeping the policy proceeds for themselves in investment accounts.

California investigators even identified instances in which life insurers drained the cash value from policies by paying themselves the monthly premium until the policy's value ran out, leaving no death benefit available for the beneficiaries. Similar cases have been noted in Texas.

Many insurers under audit have entered into agreements with insurance regulators and unclaimed property administrators in participating states. The agreements are specific to each company but all impose an obligation on the insurers to:

The television news show 60 Minutes revived public interest in unclaimed life insurance benefits with a 2016 report on the issue. At that time, 25 insurers that had compensatory agreements had admitted no wrongdoing but agreed to pay more than $7.4 billion in back payments for death benefits.

According to the Florida Office of Insurance Regulation, $5 billion of this amount will go directly to identified beneficiaries and $2.4 billion to state unclaimed property departments, which in turn will search for and pay beneficiaries. Up to an additional $3 billion in unclaimed benefits are at stake nationwide from about 35 companies that didn't join an agreement and remain under investigation.

A 2013 Consumer Reports study found the average unclaimed life insurance benefit is about $2,000.

According to the Texas Department of Insurance (TDI), 584 entities are licensed to issue life insurance policies in Texas. As of May 2017, the Unclaimed Property Division had authorized audit examinations of 40 major insurance companies and their subsidiaries. Many have signed agreements to allow the auditors to compare their policies against the DMF.

So far, the Comptroller's contract auditors have focused on major national companies, but smaller, Texas-based companies may be examined in the future.

Note: The data represent all abandoned insurance properties found by the state’s contract auditors. We can assume that life insurance proceeds account for most of these findings, however, due to the types of insurance companies under audit.

Even so, the national wave of insurance company audits has spurred some debate — and legislation — concerning the companies' basic obligations. These tend to revolve around two basic questions:

Whose duty is it to initiate payment on a policy? Historically, insurers have interpreted state insurance codes to require the beneficiary to file a claim and provide proof of death for funds to be "due and payable" (Exhibit 2). Insurers commonly included such language in their policies, which courts across the country have long recognized as contracts.

An increasing number of states, however, expect insurance companies to contact beneficiaries and initiate payment if they become aware of the death before any claim is made.

When do unpaid funds revert to the state? Under many states' laws, life insurance policies are presumed abandoned after the passage of a "dormancy period" — in Texas law, three years. The period usually begins when the policy is "due and payable," and life insurance companies traditionally have considered this to be when they receive a claim against the policy or other notification of a policyholder's death — or when a policyholder has passed a "limiting age," generally well beyond 100, and is assumed to be dead.

But many states believe the dormancy period should begin on the actual date of the insured's death, whether or not the insurer receives notification. Across the nation, however, multiple courts have ruled insurers are not legally required to determine whether a policyholder has died or seek out beneficiaries without a state law mandating such action. In the last five years, more than two dozen states have supplied these laws. 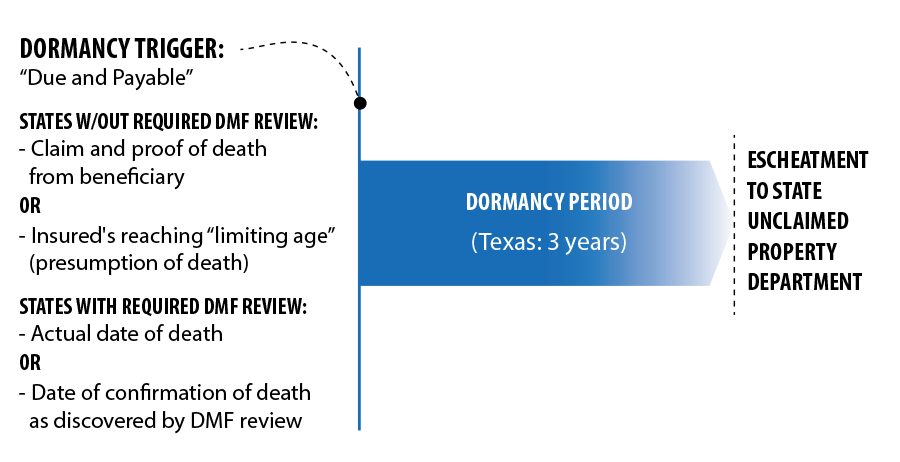 A model act and state legislation

In 2011, the National Conference of Insurance Legislators (NCOIL) created the Unclaimed Life Insurance Benefits Act, also known as the NCOIL Model Act, as a standard to govern state unclaimed property policies. Among other elements, the model act requires insurers to make periodic searches of the DMF to identify deceased policyholders and their beneficiaries.

Numerous states have adopted their own versions of the NCOIL Model Act since its inception. In April 2016, for instance, Florida approved legislation changing the beginning of the dormancy period to the actual date of death. This legislation also requires insurers to check the DMF against their life insurance clients annually.

At present, at least 25 states have adopted legislation requiring insurers to search the DMF at varying intervals (Exhibit 3). On May 19, 2017, Governor Greg Abbott signed a Texas version into law.

Texas' Senate Bill 561, modeled on the NCOIL Act, amends the Texas Insurance Code to require insurers to compare their active life insurance policies against the DMF at least twice a year. This will apply to policies issued or renewed on or after Jan. 1, 2018. Earlier policies will not be subject to this requirement.

No later than 90 days after a DMF match is identified, the insurer must complete a documented, good-faith effort to confirm the death, determine if benefits are due and attempt to contact beneficiaries. If the match is confirmed, the proceeds will be considered unclaimed property three years after the date upon which the insurer attempted and failed to locate a beneficiary or authorized representative.

Texans can visit ClaimItTexas.org or call 800-654-FIND (3463) to search the state’s unclaimed property database and file a claim.

To aid consumers, TDI has launched a Life Insurance Policy Locator Service. The agency reports it received 6,132 unique requests for the service between the October 2013 program launch and April 20, 2017. About 100 companies are participating in the voluntary service, representing 55 percent of the Texas market. To date, the program has united 1,538 beneficiaries with life insurance policies and annuities. Visit TDI's webpage for information on the program and tips for consumers.

And of course, remember that the best way to ensure beneficiaries receive the benefit of a policy is letting them know it exists. If you don't want to tell the beneficiary about a policy, at least let someone know — such as your attorney, accountant or executor of your estate. FN

Learn more about how to search for unpaid life insurance proceeds under your name.