Federal Funding in TexasA Vital Part of the State Budget

Federal funding plays an essential role in state finances, supporting a variety of programs and services. In fiscal 2016, for instance, nearly 20 percent of federal tax dollars went directly to state governments as grants to pay for programs in education, health care and infrastructure.

Texans sent the federal government $261 billion in taxes in 2016, and the state government received $39.5 billion in grants in return, or about 15 percent of our total federal tax tab. Those grants were the state’s second-largest revenue source, providing more than a third of its net revenue in that year. (State taxes, by contrast, supplied nearly 44 percent.)

But what determines how much we receive, and where does it go?

Each new round of the federal appropriations process begins with federal agencies submitting proposed budgets for their operations to the president. The Executive Office of the President then uses these to create a proposed budget and submit it to Congress.

Presidential budget requests reflect the chief executive’s goals and priorities, seeking spending increases in some areas and cuts in others. President Trump’s proposed budget for fiscal 2018 includes decreased funding for some human services programs and the Environmental Protection Agency and increases to defense and transportation programs.

In practical terms, however, presidential budgets amount to little more than suggestions for Congress.

After the presidential budget request is submitted, the U.S. House and Senate budget committees each may prepare and vote on their own budget resolutions for the year, ultimately “reconciling” them into a single document. Often, however, and increasingly in recent years, Congress may opt not to pass a budget resolution, a high-level document that isn’t legally binding. Actual appropriations for discretionary federal spending are set by each chamber’s appropriations committees, voted on, reconciled and sent to the president for signing.

If delays in the appropriations process make it necessary, Congress can enact a continuing resolution that provides temporary funding for government operations.

How Federal Funding is Distributed

According to the Office of Management and Budget (OMB), the federal government received more than $3.2 trillion in total taxes in 2016. Of that, $1.5 trillion or 47 percent came from personal income taxes, which in 2018 are expected to comprise more than half of all federal revenue for the first time in our nation’s history.

After taxes are collected, they’re appropriated to various federal agencies, some of which then allocate funding to individuals and state and local governments.

The largest share of federal aid represents direct payments to individuals for Social Security, disability, Medicare, unemployment compensation and other programs. But these payments don’t flow through state governments.

Some grants to states are based on formulas, such as block and categorical grants, while others are awarded on a competitive basis, such as highway project grants. Block grants such as Temporary Assistance for Needy Families (TANF) have relatively few “strings” attached, meaning states have broad latitude in using the money; categorical grants, such as those for the Head Start program, are more restrictive. States must follow each grant program’s guidelines to continue receiving funds. And some grant programs, such as Medicaid, require the state to contribute matching funds.

Much of federal funding to states is driven by population. The most populous states receive more money simply because they’re larger and have more people in need of services. For this reason, federal funding to the states often is examined on a per capita basis.

Federal funding also can vary due to each state’s specific circumstances. Military bases, national parks, federal offices and the occurrence of natural disasters all can help determine how much federal funding a state receives in any given period.

The different types of grant programs also can account for variability in federal funding. Grants for community development usually rise after natural disasters, while competitive grants by their very nature mean that some states won’t receive as much as others.

Medicaid, one of the largest aid programs, is linked to personal income. Each state’s share is determined by its Federal Medical Assistance Percentage (FMAP), set annually based on per capita income. By federal law, the FMAP must be at least 50 percent; for federal fiscal 2018, Texas’ FMAP is 56.88 percent, meaning that the federal government will pay a larger share of Texas’ Medicaid funding than the state. Similarly, poverty rates determine needs-based funding for programs such as TANF.

About 35.5 percent of Texas’ net revenue for fiscal 2016 came from the federal government.

From 2000 to 2015, federal funds comprised between 29.9 and 40.8 percent of all Texas state revenue, and averaged about 34 percent (Exhibit 2). The federal share in all states tends to rise during recessionary periods and decline in better economic times. In each year of the period, however, Texas’ reliance on federal funds was higher than the average among states.

According to Pew Charitable Trusts, in fiscal 2015 Louisiana was the most dependent on federal funds, at 42.2 percent of total revenues, while North Dakota had the lowest at 18.4 percent.

On a per capita basis, however, the picture looks considerably different. In fiscal 2016, Texas ranked 43rd among states in federal funds per resident, receiving $1,493, well below the national average of $1,871 (Exhibit 3).

What do the federal grants pay for?

This increase has been driven largely by rising costs for Medicaid, which accounts for more than 90 percent of all federal health care spending.

Exhibit 4: Federal Grants to State and Local Governments by Category, 2000-2016

In Texas, more than 95 percent of federal grants received in fiscal 2016 went to three functional areas of government: health and human services; public and higher education; and business and economic development, primarily highways and transportation (Exhibit 5).

Medicaid received more funding than any other single program — $24 billion in fiscal 2016, according to the Legislative Budget Board, or more than half of all federal funding for health and human services in Texas.

The unprecedented destruction wrought by Hurricane Harvey was met with a major federal response and significant promises of federal aid.

Harvey was declared a major disaster on Aug. 25, 2017. Within 30 days, the Federal Emergency Management Agency (FEMA) had provided 3 million meals and 3 million bottles of water to affected areas and assigned 28 urban search and rescue teams that rescued nearly 6,500 Texans. In all, about 31,000 federal employees from multiple agencies were engaged in the immediate response to Harvey.

On Sept. 8, the president signed into law a $15.3 billion measure providing federal aid for those affected by Hurricane Harvey, including $7.4 billion from FEMA’s Disaster Relief Fund, $450 million from the Small Business Administration’s (SBA’s) Disaster Loan Program and $7.4 billion in community development block grants from the U.S. Department of Housing and Urban Development. 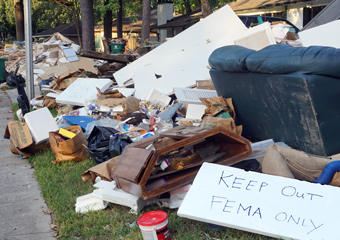 According to FEMA, individual Texans and Texas businesses received about $1.5 billion in federal grants and loans in the first month after landfall. That included $571.8 million in FEMA funding to about 271,000 Texas households for needs such as temporary housing and emergency home repairs; $608 million in expedited claim payments through the National Flood Insurance Program; and $367 million in low-interest disaster loans from SBA for Texas businesses, homeowners and renters.

As of Sept. 22, about 792,000 households had applied for FEMA assistance. More than 24,000 Texas families were still living in hotel rooms paid for by FEMA, and another 2,100 remained in shelters.

To learn more about federal funding in Texas, visit the Legislative Budget Board and read Top 100 Federal Funding Sources in the Texas State Budget. (PDF)