A new $46 million, state-of-the-art building for science, technology, engineering and mathematics (STEM) coursework is taking shape at Stephen F. Austin State University in Nacogdoches. Scheduled to open in fall 2018, the Ed and Gwen Cole STEM building will be the new hub for SFA students pursuing careers in these fields. 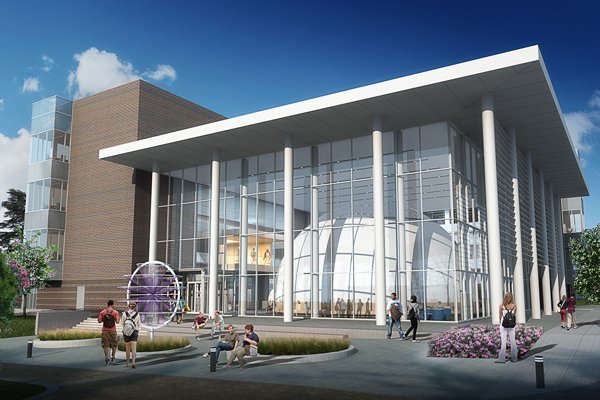 The building will feature a planetarium with a 52-foot dome and “makerspaces,” special areas where students can collaborate on creating prototypes and other constructions. Tuition revenue bonds appropriated during the 2015 legislative session provided funding for the new center, which will house the school’s department of physics and astronomy and department of computer science.

One small item in the massive 2018-19 Texas state budget could have a big effect on Amarillo. The new budget appropriates $4.1 million in exploratory funding for a proposed Texas Tech veterinary school in the Panhandle city.

The funds will be used for a detailed feasibility study of the project. The city’s economic development pros think it could be a huge hit for the community and its economy; the Amarillo Economic Development Corporation has offered Texas Tech $15 million in incentives to pursue the project.

For more and more companies, Plano’s the place to be.

A recent purchase by Boston-based Liberty Mutual Insurance will anchor the city’s Legacy West development. The company’s newly-constructed, 1.1 million-square-foot office complex represents a major commitment to North Texas, as do the 5,000-plus Liberty Mutual employees who will work in the facility.

In addition to Liberty Mutual, Legacy West has also attracted other corporate icons. Toyota has its North American headquarters there, and Boeing is establishing a division headquarters in the center. JP Morgan Chase has begun moving employees in as well.

At the June ribbon-cutting, Plano mayor Harry LaRosiliere said “Welcome to the center of the universe.” While astronomers may not agree, there’s no disputing the fact that Plano is thriving. FN

Texas Toasts is an occasional series highlighting good news in the Texas Economy.