The regular session of the Texas Legislature concluded on May 29, 2017. State policymakers filed and deliberated on thousands of bills. More than 1,200 of them became law (Exhibit 1), including Senate Bill (SB) 1, the General Appropriations Act, which will fund state government operations for the next two years. 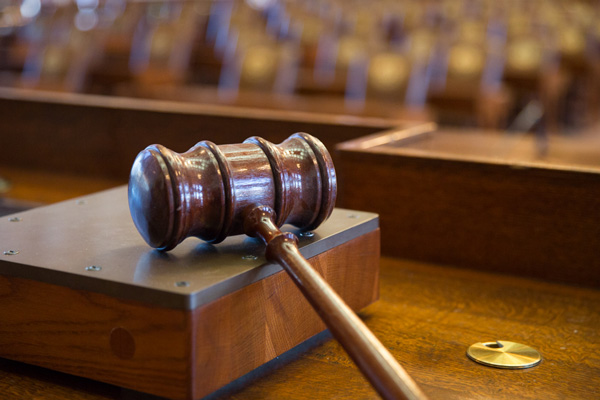 The 2018-19 biennial budget was widely regarded as a significant challenge for legislators. In January, Texas Comptroller of Public Accounts Glenn Hegar provided the Legislature with a $104.9 billion Biennial Revenue Estimate (BRE) for general revenue that reflected a low starting balance, increased dedication of sales tax revenues and lower revenue collections from 2016 due to ongoing weakness in the oil and gas industries.

The BRE shows the state’s financial condition and estimates the revenue it can expect to receive during the next two-year budget period. Legislators are constitutionally required to keep spending below that threshold if no additional revenue is generated or freed up.

The state’s finances were looking tight in January.

“Passing the budget was a key challenge in the 85th Legislature’s regular session,” says Tom Currah, chief revenue estimator at the Comptroller’s office. “I think a lot of people worried legislators wouldn’t get it passed before the end of the session, but ultimately they did.”

The Legislature’s final budget for 2018 and 2019 appropriates $107.7 billion in general revenue and $216.8 billion from all funds, including federal aid and revenues dedicated to specific purposes such as the State Highway Fund. The Legislature also appropriated about $1 billion in general revenue and almost $1.6 billion in federal funds as supplemental appropriations for 2017 to cover outstanding obligations from the previous biennium, such as Medicaid obligations, not fully covered by the previous budget.

When lawmakers submitted their budget to the Comptroller for certification, Hegar praised their efforts.

“Even before I released the Biennial Revenue Estimate back in January, lawmakers understood this session would be difficult, and coming to a budget consensus would require sacrifice and compromise,” Hegar said. “I commend legislators for crafting a conservative budget that remains within my revenue forecast.”

Exhibit 1: Regular Session of the 85th Legislature:
By the Numbers 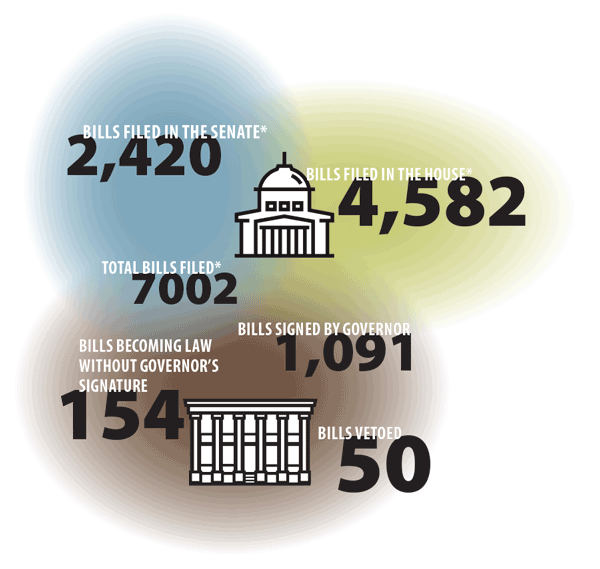 * Does not include House and Senate resolutions, which generally honor various individuals, communities and initiatives.
Source: Texas Legislature Online

* Does not include House and Senate resolutions, which generally honor various individuals, communities and initiatives.
Source: Texas Legislature Online

The 2017 regular session of the Legislature didn’t pass legislation that would significantly affect revenue collections, according to Currah.

“Proposals were made regarding the franchise tax,” Currah said. “But nothing was decided and that issue died along with others that might have significantly affected revenue available to spend.”

Still, the Legislature needed to free up additional revenue to make the budget work. To appropriate $107. 7 billion for the biennium, plus another $1 billion of general revenue in supplemental appropriations for 2017, legislators needed about $4 billion in additional funds.

The Legislature was able to identify nearly half of that, $1.8 billion, by delaying a payment to the State Highway Fund. This was accomplished through a rider in the General Appropriations Act.

Another $668 million came from deeming a number of dedicated accounts within general revenue as available for Comptroller certification, through a funds consolidation bill, House Bill (HB) 3849.

The Comptroller’s office also was able to certify an additional $500 million for spending by expediting the sales of certain securities held by the state.

The 2017 regular session changed little for state employee retirement. For fiscal 2018 and 2019, retirement contribution rates will remain the same for Texas state government (9.5 percent), individual agencies (0.5 percent) and employees (9.5 percent). The Legislature made no changes to retirement eligibility or benefits.

One retirement benefit change, however, will prevent certain state and local elected officials from receiving pension benefits if convicted of a felony related to the performance of their official duties. SB 500 enacted this restriction immediately.

The Texas Constitution and legislative rules establish key dates and deadlines for each 140-day regular legislative session. For 2017, these included: 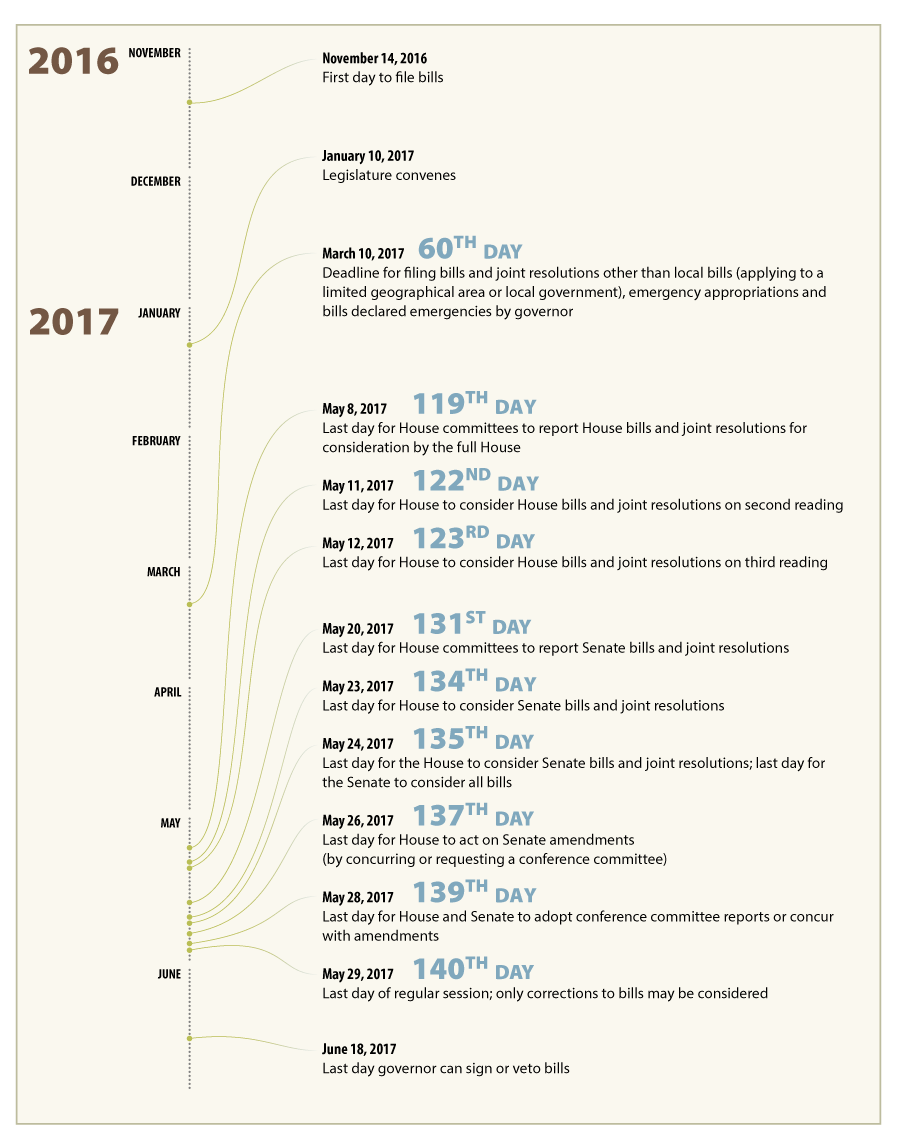 ERS plan beneficiaries also saw few major changes to their insurance. The state will continue to fund insurance at 100 percent for full-time employees and 50 percent for dependents. New changes to ERS insurance include laws meant to expand the use of mediation for out-of-network bills and improve benefits for breast cancer testing, hearing aids and cochlear implants.

With the passage of HB 3976, however, the Legislature took significant action to maintain the solvency of TRS-Care, the health care plan used by about 265,000 retired public school employees. In a November 2016 report, the Joint Interim Committee to Study TRS Health Benefit Plans projected a TRS-Care shortfall of $1.3 billion to $1.5 billion for the 2018-19 biennium.

To protect the system, HB 3976 eliminates three coverage tiers for retirees receiving TRS-Care benefits as of Jan. 1, 2018. Those under age 65 will be moved to a high-deductible health care plan with a $3,000 deductible and maximum out-of-pocket costs of $7,150. Older retirees will participate in a Medicare Advantage plan with a $500 annual deductible and a $3,500 maximum out-of-pocket cost.

While such decisions are always tough, Hegar commended legislators for addressing an issue that could have become a crisis.

“Delaying action on some of our long-term obligations will only cost us more over time, much like compounding interest on a loan,” Hegar said. “If the state had turned a blind eye to TRS-Care, the program could have failed in the upcoming biennium.”

Laws of Note to the Comptroller’s Office

As bill filing and deliberation progressed, the Comptroller’s office monitored the proceedings, assisted with fiscal notes and kept an especially close watch on a number of bills affecting the agency and state taxation. Some that became law include:

HB 1866 — Under Texas law, criminal defendants may be ordered to make restitution payments to their victims, but probation departments sometimes find it difficult to locate crime victims, and their funds then become “unclaimed property” as administered by the Comptroller’s office. HB 1866 requires probation departments to provide detailed information on crime victims, including last known addresses and other identifying information, to our office when restitution payments become classified as unclaimed. It also permits the agency to publicize restitution payments along with other Texas unclaimed property on our website, making it easier for victims to find and claim their property themselves.

“With the enrollment of HB 1866, we can ensure our office receives more of the information necessary to find crime victims who are owed money,” Hegar says. “Getting them their money as quickly as possible is the right thing to do and will have a beneficial impact on their lives.”

SB 255 — State law requires the Comptroller’s office to train and certify all state agency purchasing personnel. The agency, however, believes some of the requirements involved were overly prescriptive and inflexible.

SB 255 streamlines the training process by eliminating inefficient policies for training purchasing personnel, while maintaining previous content requirements. It also eliminates a years-of-experience requirement for certification, which proved to be a significant barrier to entry in the field of public procurement. The bill also increases training requirements for all agency contract managers.

SB 745 — This bill tightens the language of the Texas Tax Code relating to when certain employers can claim an exemption on sales taxes due for services provided by temporary employees.

The 85th Texas Legislature met in special session from July 18 to Aug. 15, 2017. Among other issues, the session addressed one holdover from the regular session, “Sunset” reauthorization of five Texas state agencies.

Bills related to other, thornier issues, such as school finance, didn’t pass.

The Comptroller’s office — and Fiscal Notes — will continue to monitor legislation that could affect the state’s finances and economy.

A Bit of Background

For more information about the state’s long-term financial challenges, be sure to read our March 2017 special edition, Texas State Government and Long-Term Obligations, which examines state employee pension funding, the TRS-Care program, the Texas Guaranteed Tuition Plan, a state-sponsored prepaid tuition plan, and the ever-growing backlog of deferred maintenance projects for state buildings.

To better understand the role fiscal notes play in the legislative process — and fully explore the meaning of this publication’s name — read “The Fiscal Noting Process: Doing the Math on New Legislation.”

And if you’re interested in Texas’ “rainy day fund,” a sometimes-contentious source of funding for legislative projects, dig into our archives to read “The Texas Economic Stabilization Fund: Saving for Rainy Days.” FN 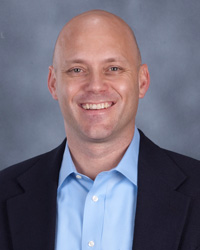