Paying for Texas Convention Centers If You Build It, Will They Come?

Convention centers are a common if expensive strategy for local economic development. Once a feature of the largest cities, today convention centers are increasingly common across America, established in the hope of luring visitor traffic that can revitalize communities. 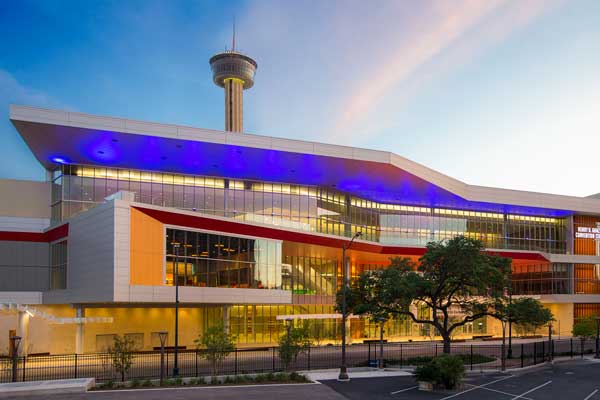 They can help provide a sense of place, hosting annual events that come to characterize a city, such as South by Southwest in and around the Austin Convention Center or the Houston Livestock Show and Rodeo at the NRG Stadium.

But the sheer number of convention centers has made the market highly competitive, putting pressure on these venues to expand and add the latest innovations to attract events. In Texas and elsewhere, state and local governments have responded by increasing incentives and subsidies for the construction, renovation and maintenance of convention centers and their surrounding hotels and infrastructure.

These incentives can be controversial, though. Convention centers are highly expensive operations, and most don’t make a profit — particularly when considering the debt service payments involved in their construction. Private investors are reluctant to invest in such uncertain ventures, which leaves the tab with taxpayers. Advocates of convention centers argue that these operating losses are more than compensated by added jobs, investment and economic activity produced by visitor spending.

According to the Governor’s Economic Development and Tourism office, Texas is home to more than 90 convention centers; Exhibit 1 shows the 10 largest. In all, these facilities have about 8 million square feet of meeting space, enough room to cover more than 138 football fields.

Source: Texas Office of the Governor, Economic Development and Tourism

The sheer number of convention centers has made the market highly competitive, bringing pressure to expand and add the latest innovations.

Yet convention space continues to grow throughout Texas and across the nation, despite at least some indications that the market is saturated — and that conventions themselves are less popular. A 2012 report by Citylab, for instance, noted that U.S. convention space had risen by 50 percent in the preceding 20 years, yet “attendance at the 200 largest conventions peaked at about 5 million in the mid-1990s,” and had declined steadily since.

Local governments have several economic development tools and financial incentives available for the construction and maintenance of convention center facilities. One key tool is the hotel occupancy tax (HOT).

Texas has had a state hotel occupancy tax since 1959, with a current rate of 6 percent of the cost of lodging. Its revenues are allocated primarily to the state’s General Revenue Fund, with the remainder supporting the advertising and marketing activities of the Governor’s Economic Development and Tourism office.

Texas cities first received authority to impose a similar, local tax in the early 1970s; counties followed in 1981. Local HOT revenue must be used to promote tourism and the hotel and convention industry. Among the specific uses allowed in law is “acquisition of sites for and the construction, improvement, enlarging, equipping, repairing, operation and maintenance of convention center facilities or visitor information centers, or both.”

In 1997, the Legislature approved an additional HOT that can be imposed by cities or counties specifically to support sports and community venue projects, including convention centers.

There is no definite count of jurisdictions levying hotel taxes. To increase transparency, however, legislation approved in 2017 now requires cities imposing a hotel tax to report to the Comptroller’s office their tax rates and the amount of taxes collected the preceding fiscal year, as well as the amounts allocated for authorized expenditures. This information is self-reported and is not necessarily complete, but the reports do supply useful data.

According to these reports, at least 407 Texas cities levy a municipal HOT. Texas’ 10 largest cities allocated at least $182 million in HOT revenue to convention centers and visitor information services (a joint category) in 2017, accounting for nearly half of all HOT revenue reported. Plano, Dallas and Austin devoted about two-thirds of their total HOT revenue to this purpose (Exhibit 2).

As with cities, by law every expenditure of county HOT revenue must directly enhance and promote tourism and the convention and hotel industry, and one of the specific categories of expenditure allowed is the establishment, improvement or maintenance of a convention center or visitor information center.

In addition to their own HOTs, cities and counties also can levy a separate, 2 percent hotel tax specifically to support sports and community venue projects, the latter category including convention centers. The tax can be issued by a city, county or a combination of the two, as in the case of the Harris County-Houston Sports Authority, a joint city-county creation that collects the venue tax for the benefit of sports facilities in the area.

This tax can support a wide range of projects, including arenas and stadiums, convention centers, museums, theaters, music halls and parks, as well as qualifying infrastructure including stores, restaurants, parking facilities, roads and water systems — anything that enhances the venue’s value or appeal. Austin, for instance, has used the tax to fund the expansion of the Austin Convention Center.

In the municipal HOT reports submitted to the Comptroller’s office, five cities have reported levying the venue tax (Exhibit 3).

Convention space continues to grow throughout Texas and across the nation, despite some indications that the market is saturated.

In 1993, the Legislature authorized the city of Houston to use certain tax revenues to repay bond debt or other obligations for hotel projects located within 1,000 feet of a convention center. The cities of Dallas, Fort Worth and San Antonio received the same authorization in 1999. This legislation acknowledged the importance of hotel rooms as an economic development tool to ensure the success and competitiveness of convention center complexes.

Under state law, hotel projects in certain municipalities can receive rebates of the state hotel occupancy tax and sales tax revenue they collect, as well as their collections of local hotel taxes, sales taxes, mixed beverage taxes and property taxes. To be eligible, these hotel projects must be within 1,000 feet of a convention center facility, and the hotel or its land must be owned by the city. Tax receipts from meeting spaces, restaurants and shops, convention center entertainment-related facilities, parking facilities and water and sewer systems may be eligible for the rebates as well. The hotel owners can receive these rebates for 10 years after opening.

The number of cities that can offer this array of tax rebates has increased drastically in recent years. The state amended the law to allow the state tax rebates in six more cities in 2015 and 14 more in 2017. With population and geographic growth, additional cities have qualified under limits set in these amendments, bringing the current total to 37 (Exhibit 4).

* Qualified hotel project.
** Grand Prairie qualifies as a city with a population of 173,000 or more located in two or more counties, based on its 2010 population, not when the law became effective on Sept. 1, 2009.
*** Hotel and convention center project.

Of these, however, only Houston, Dallas, Fort Worth and San Antonio received state tax rebates for hotel projects between fiscal 2012 and fiscal 2017; the state revenue involved totaled $81.5 million (Exhibit 5).

Note: Totals may not add due to rounding

Among the four cities receiving state sales and hotel tax rebates for hotel projects between fiscal 2012 and fiscal 2017, Dallas received the most, at more than $28 million (Exhibit 6). Houston’s last-place status reflects the fact that the city had no eligible projects between January 2014 and May 2017, due to the 10-year limit.

A few years ago, Fort Worth’s convention center received another state tax break that, so far, is unique in Texas.

In 2013, the Legislature allowed the city to establish a “project finance zone” (PFZ) in areas surrounding the Fort Worth Convention Center and the new Dickies Arena, adjacent to the Will Rogers Memorial Center. (Dallas also is eligible to create a PFZ but has not done so yet.)

Within the PFZ, Fort Worth is allowed to collect the “incremental revenue growth” in state hotel occupancy taxes, sales taxes and mixed beverage taxes generated by hotels until 2043. This “incremental” growth is any increase in hotel-associated taxes above collections for 2013. The money can be used to pay off bonds associated with expanding the convention center and building the arena.

Public investment in convention centers is likely to continue, but it’s important to ensure public scrutiny.

Convention center complexes remain a potent symbol of downtown development and dynamism, and local officials and business leaders are likely to continue calls for more spending to keep them competitive for state and national events. Such moves reflect a general belief that convention centers pay for themselves through higher hotel and sales tax revenue, more jobs and more private investment. Most, however, do not cover their operating costs, and competition among them has risen sharply.

Public investment in convention centers is likely to continue, but it’s important to ensure public scrutiny. The Legislature’s new HOT reporting requirement is a step toward ensuring that lawmakers and citizens can keep an eye on how this money is spent. FN