Texas Manufacturing The Changing World of “Made in Texas”

Any modern economy consists of a huge variety of activities, from banking to lawn care to cloud computing services. But to most of us, somewhere in the back of our minds, an “economy” still means people in a big building somewhere, making physical products. 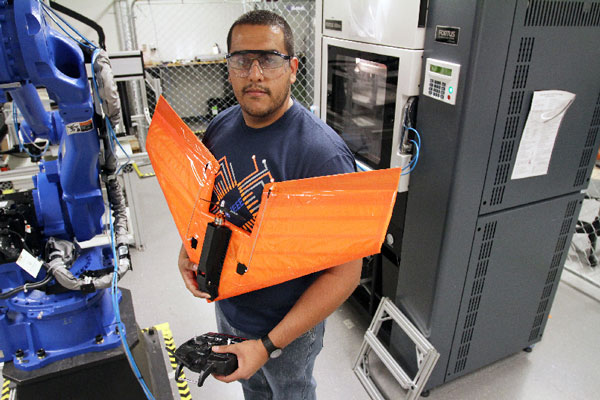 Now factory smokestacks are giving way to computer-assisted design and clean rooms, and the most important raw materials often are human intelligence and insight. But a big part of the Texas economy still depends on manufacturing, which drives both innovation and employment in a host of related industries.

Texas Comptroller Glenn Hegar recently wrapped up a Good for Texas tour of six manufacturing facilities around the state, sharing the results of a new Comptroller study of this economic sector, which contributes more than $218 billion annually to the Texas gross state product (GSP).

“Texas has a thriving manufacturing economy,” Hegar says. “Our state’s resources have made it a natural leader in petrochemicals, but there’s a lot more going on. Our research institutions are fostering high-tech manufacturing, and our business-friendly environment and skilled labor force have helped create new jobs in automotive manufacturing and other cutting-edge industries.”

The Evolution of Manufacturing

In the last half-century, technical advances have revolutionized the nature of manufacturing. Advanced technologies and automation have boosted productivity while eliminating much of the need for the dirty, dangerous work once performed by unskilled labor. Today’s shop floors and refineries require increasingly sophisticated technical knowledge and skills.

This evolution inevitably reduced manufacturing employment. From 1997 through 2016, the U.S. manufacturing job count fell by 29 percent, and by 19 percent in Texas. In 2016, about 845,000 Texans were directly employed in manufacturing (Exhibit 1).

But in Texas, the sector’s economic contributions have soared, despite a slump induced by the Great Recession. From 1997 through 2016, the real GSP for Texas manufacturing rose by nearly 94 percent, exceeding the growth of the overall state economy and more than doubling the growth of U.S. manufacturing as a whole (Exhibit 2).

The Comptroller study examined 18 distinct manufacturing subsectors, all of them represented in Texas. In all, Texas contributes 10 percent of U.S. manufacturing’s gross domestic product.

While total manufacturing employment has declined, the quality of the jobs it produces has improved dramatically. Technically skilled workers are always in demand, and their salaries reflect it. In 2016, Texas’ manufacturing jobs paid an average of more than $73,000, about 37 percent more than the statewide average wage of about $53,500 (Exhibit 3). Recent Texas Workforce Commission (TWC) estimates indicate Texas gained more than 36,000 additional manufacturing jobs in 2017.

And manufacturing spurs employment in a host of related fields, including various service providers, part suppliers, distributors, transportation companies and more. The Comptroller’s office estimates that manufacturing supports about 2.2 million other Texas jobs. In all, then, more than a quarter of all working Texans depend directly or indirectly on the state’s manufacturers for their paychecks.

Texas is, of course, the national leader in petroleum and coal products manufacturing, with about 30 percent of the nation’s petrochemical refining capacity, and the largest manufacturer of chemical products as well. Together, these two subsectors employ more than 100,000 Texans and contribute nearly $99.5 billion to Texas’ GSP. They produce high-paying jobs, too; in 2016, petroleum manufacturing paid the highest average wages of any manufacturing subsector, at $131,454, while the chemical products field paid an average of $106,865.

But there’s far more to manufacturing in Texas. The growth of the state’s manufacturing economy is led largely by three subsectors — computer and electronic products, motor vehicles and parts and machinery manufacturing (Exhibit 4). 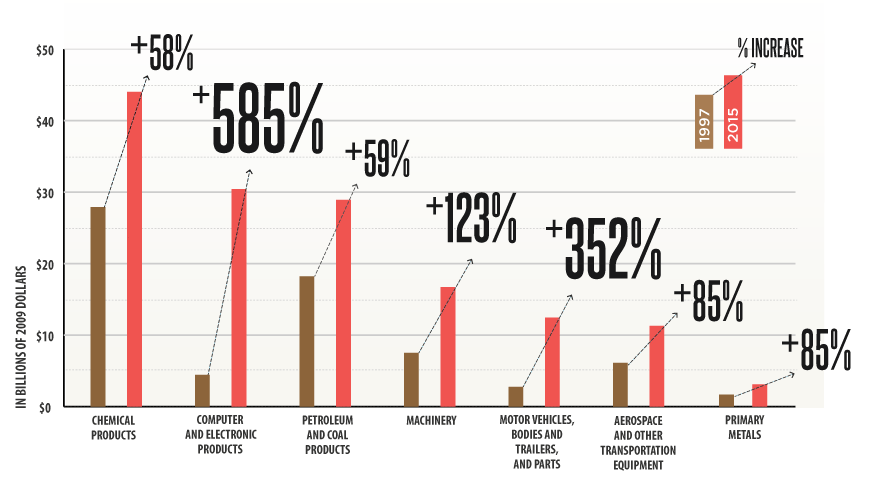 *GSP values in this exhibit are inflation-adjusted to 2009 dollars and thus differ slightly from 2015 GSP figures cited in the text.
Note: GSP data for subsectors available only through 2015.
Sources: U.S. Bureau of Economic Analysis and Texas Comptroller of Public Accounts

The latest Good for Texas tour reflected the extraordinary diversity of Texas’ manufacturing scene. Some highlights:

Computer and electronic products manufacturing is the second-largest manufacturing subsector in Texas in terms of GSP, contributing about $28.7 billion in 2015 (most recent available data). Its economic importance has grown explosively in recent years, with a real GSP increase of 585 percent since 1997.

The Brookings Institution defines “advanced” manufacturing industries as those with research and development spending per worker ranking in the top 20 percent of all industries and a share of workers with high levels of scientific and technical knowledge exceeding the national average.

This cornerstone of the Austin-Round Rock and Metroplex economies directly employed more than 90,000 Texans in 2016, while supporting another 218,000 Texas jobs. Those Texans earned average wages of $121,210 in 2016, more than double the statewide average of $53,500.

And Texas electronics are used throughout the world. According to the International Trade Administration, computer and electronic products are Texas’ most important exports, accounting for more than $47 billion or more than 20 percent of all Texas exports in 2016. Mexico, our most important trading partner, received more than half of those, with a value of nearly $26 billion.

Motor vehicle-related manufacturers include makers of cars, trucks, trailers and automotive parts. These industries have expanded rapidly in Texas in recent years, boosting their contributions to real state GDP by 352 percent since 1997. They employed nearly 39,000 Texans in 2016, and supported about 67,000 other jobs in the state. In 2016, Texas exported $13.7 billion in auto-related products.

Texas’ auto-related manufacturers are high-tech and relatively high-paying; all are considered advanced industries under the Brookings Institution’s definition. Texas wages for positions in these industries averaged about $60,700 in 2016. Both the Metroplex and the San Antonio area have significant motor vehicle operations, and Upper East Texas has particularly high concentrations of jobs in the manufacture of truck trailers, travel trailers and campers.

Machinery manufacturing includes makers of equipment used in agricultural, construction and mining activities, heating and cooling units, engines, turbines, transmissions and a variety of industrial machinery. It’s one of the largest employers of manufacturing workers, providing about 88,000 Texas jobs in 2016 and supporting another 117,000 jobs indirectly. According to TWC, the subsector added another 8,800 net jobs last year.

Nearly half of Texas jobs in machinery manufacturing are in the Houston area, with significant activity in oil and gas field machinery, air and gas compressors and air conditioning and heating equipment.

Its real economic impact in Texas rose by 123 percent from 1997 to 2015, to $19 billion. In the U.S. as a whole, by contrast, this subsector’s real gross product rose by just 4 percent in the same period.

Primary metals manufacturing includes makers of basic metal products used extensively by the automotive, energy, machinery and transportation industries, such as castings, pipe, tubes, wires and springs. These businesses primarily serve local demand, and generally locate near their customers; typically, they also choose locations near sources for their raw materials to reduce the cost of transporting them. Raw materials represent the largest cost by far for these manufacturers. The cost of ores represents 70 to 80 percent of the final cost of steel, for instance.

Primary metals manufacturing employed more than 20,000 Texans in 2016, paying average wages of nearly $58,000. It supports nearly 50,000 Texas jobs in other industries. Its inflation-adjusted contributions to the Texas economy have risen by 85 percent since 1997 and exceeded $3.1 billion in 2015.

Several areas of the state have significant concentrations of primary metal employment. El Paso, for instance, produces copper products, while Brownwood is a center for iron and steel pipe manufacturing, and both Longview and the Killeen-Temple area are home to steel foundries.

Makers of fabricated metal products produce a huge variety of products ranging from cutlery to shipping containers. This relatively labor-intensive subsector employs more Texans than any other manufacturing category, with more than 118,000 jobs in 2016. Wages and salaries account for nearly two-thirds of the value added in this subsector, compared to 46 percent for all manufacturing activity.

Fabricated metal manufacturers are strongly concentrated in various areas of the state with specific industrial needs, such as makers of valves, boilers and heat exchangers that serve the petrochemical refining and chemical industries along the upper Gulf Coast. This subsector saw job losses during the oil price slump of 2015 but has recovered strongly; current TWC estimates show it adding another 14,000 jobs in 2017.

In Texas, the most important portion of this subsector, in terms of employment and economic impact, is aerospace manufacturing, a highly innovative industry that spends heavily on research and development investment and drives export activity. The state also has substantial concentrations of railroad-related manufacturing in East Texas and boat building and repair along the upper coast.