By Kevin McPherson, Jessica Donald and Bruce Wright Published May 2018

Transportation is essential to any economy, and especially so in a state as large and as fast-growing as Texas. 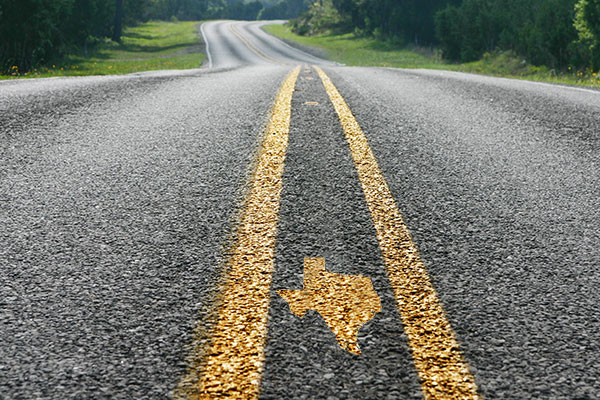 According to the Texas Office of the State Demographer, Texas’ population may double by 2050, to more than 54 million. Such growth implies the need for significant expansion and improvement of the state’s transportation infrastructure, its roads, rail lines, airports, marine ports and waterways. Yet the price tag for such work is daunting.

The Texas Department of Transportation’s (TxDOT’s) most recent long-range plan, Texas Transportation Plan 2040, estimates that keeping Texas’ various transportation modes “in a good state of repair” will require $547 billion in state and federal funding through 2040 (Exhibit 1). That equates to about $21 billion annually, or more than twice as much transportation funding as the state currently anticipates.

Exhibit 1: Texas Funding Needs by Transportation Mode Through 2040
(In Billions of Dollars*)

Texas has nearly 314,000 miles of roads and highways, more than any other state. About a quarter of the total represents the state highway system, with the remainder maintained by local governments. 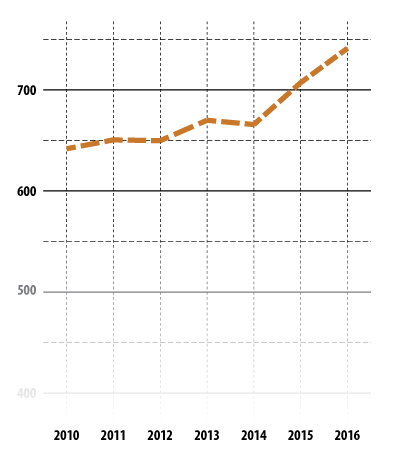 Both passenger and commercial users cause wear to our roads and highways, and the state’s growth increases the damage. The total daily vehicle miles traveled, a common measure of road use, rose by 15.5 percent between 2010 and 2016 (Exhibit 2), due largely to population growth and increased economic activity following the Great Recession. In other words, drivers in Texas drove about 100 million more miles in 2016 than in 2010.

Texas cities in particular are coping with increased congestion and lengthier travel times. The Texas A&M Transportation Institute (TTI) tracks the costs of traffic congestion in the nation’s urban areas, due to delays and wasted fuel, in its Urban Mobility Scorecard reports. The most recent edition, for 2015, found traffic congestion cost Texas city drivers from $494 to almost $1,500 each in 2014 (Exhibit 3).

A fully loaded tractor-trailer truck causes 10,000 times as much damage to the road surface as a passenger vehicle.

But Texas’ cities aren’t alone in needing road work. In rural areas with significant new oil and gas production, truck fleets carry heavy equipment, “fracking” water and other supplies on aging farm-to-market roads. TTI reports such roads are carrying from 20 to 50 times the amount of truck traffic for which they were designed. According to TxDOT, a fully loaded tractor-trailer truck causes 10,000 times as much damage (PDF) to the road surface as a passenger vehicle.

Texas’ State Highway Fund (SHF) receives nearly half of its funding from the federal Highway Trust Fund (HTF), which supports transportation projects across the nation. The federal taxes on gasoline and diesel fuel, at 18.4 cents and 24.4 cents per gallon respectively, haven’t changed since 1993 — while the buying power of the dollar has fallen by 40 percent due to inflation. According to a 2016 estimate by the Congressional Budget Office, the HTF will be insufficient to meet its obligations by 2021.

The remainder of the SHF is funded largely with state fuel taxes and auto registration fees. As with the federal taxes, Texas state tax rates on motor fuels haven’t changed since 1991, despite a significant decline in the purchasing power of each tax dollar. Furthermore, the relatively small but rapidly growing number of all-electric vehicles in Texas pay no fuel taxes at all.

TxDOT has recommended that Texas invest $396 billion to maintain, repair and expand the state’s roadways.

Texas recently attempted to shore up highway funding with Proposition 1 (2014) and Proposition 7 (2015), constitutional amendments that direct portions of severance and sales tax revenues to the SHF. These measures should provide up to $2.5 billion in sales tax revenue annually, and severance tax revenues estimated at more than $700 million annually during the next two years. These sums, however, will fund only part of the current maintenance backlog.

TxDOT’s Texas Transportation Plan 2040 recommended that Texas invest $396 billion in state and federal funds to maintain, repair and expand the state’s roadways, or about $15 billion annually through 2040.

Texas also has the largest share of rail lines among states, with more than 10,400 miles of track. According to TxDOT, 49 railroad operators move freight in Texas, including three of the nation’s largest (“Class 1”) rail companies.

Freight rail is a remarkably efficient way to transport cargo, as a 100-car train unit can carry about 10,000 tons of goods, the same amount as 385 semi-trailer trucks. According to the Association of American Railroads, in 2016 rail could move a ton of freight an average of 486 miles per gallon of fuel.

In contrast to roads and highways, most costs associated with freight rail are borne by the private sector, although the Federal Railroad Administration provides a variety of grants to operators. TxDOT’s 2016 Texas Rail Plan Update noted that, “Texas, like many states, has a constitutional limitation that prohibits most direct state transportation fund expenditures from being used for rail projects.” The state does, however, provide some funding for purposes such as rail crossing safety and emissions reduction.

In 2005, Texas voters approved the creation of a Rail Relocation and Improvement Fund, but it has yet to receive appropriations or a dedicated revenue source.

The “non-highway freight” category in Exhibit 1 includes freight rail as well as seaports and waterways, air cargo facilities and pipelines. Freight rail makes up the largest portion of this category by far, with $3.9 billion in spending needs through 2040.

The federally funded Amtrak system provides limited passenger service in Texas. Other public passenger transport is provided by dozens of urban and rural transit systems and eight metropolitan transit authorities, which derive operational funding from fees and local sources and capital funding (for vehicles, construction, etc.) primarily from bond issues and other financing as well as federal grants.

These systems rely on buses, although light rail services also move people in Austin, Dallas, Fort Worth and Houston and between Denton and Carrollton in the Metroplex area. Ridership generally ebbs and surges in relation to gasoline prices; TxDOT reports transit services provided more than 291 million passenger trips (PDF) in fiscal 2016, at an operating cost of nearly $2.4 billion. TxDOT estimates that keeping public light rail lines and transit services efficient will require nearly $123 billion in funding through 2040, or about $4.7 billion annually.

Texas has nearly 400 airports, including 24 commercial service airports, which offer regularly scheduled flights and serve at least 2,500 passengers annually. Among these are two of the nation’s largest and busiest, Dallas-Fort Worth International Airport and George Bush Intercontinental Airport in Houston. The remainder are general aviation airports, serving a variety of private aircraft and small charter operations.

Between 2010 and 2015, Texas’ airports saw an 8 percent increase in the number of passengers they serve each year, slightly higher than the nationwide increase of 7 percent. According to the Federal Aviation Administration, civil (nonmilitary) aviation contributed more than $110 billion to Texas’ economy (PDF) and supported nearly 644,000 Texas jobs in 2014 (most recent available data).

Commercial airports receive most of their funding from federal grants and local sources, as well as terminal concessions, car rentals and parking services. General aviation airports receive both state and federal funding but rely primarily on hangar rents and fuel sales.

While many Texas airports have aging infrastructure, overall runway conditions are considered good. Current funding for both general and commercial airports, however, is inadequate to meet growing demand and rising maintenance needs. Federal and state revenues contribute about $140 million a year to aviation projects in Texas, but TxDOT estimates that Texas needs about $21.6 billion by 2040, or $800 million a year, to add capacity and keep existing airports in good condition.

Marine Ports and the Intracoastal Waterway

Texas has 21 seaports (PDF) that handled more than 563 million tons of cargo in 2015, or about 22 percent of the national total. These contribute nearly $369 billion to the Texas economy annually. Three Texas ports, those of Houston, Beaumont and Corpus Christi, are among the nation’s 10 busiest in terms of tonnage handled (Exhibit 4).

Three Texas ports, those of Houston, Beaumont and Corpus Christi, are among the nation’s 10 busiest.

The state’s largest ports typically receive about half their funding from public sources (federal grants and local bond issues) and half from user fees; smaller ports often depend on tax subsidies as well.

In addition to continued maintenance, Texas’ major ports have expansion needs spurred by factors including the recent widening of the Panama Canal, which provides larger ships with ready access to Texas ports, as well as fast growth in U.S. exports of liquefied natural gas, which quadrupled in 2017. These trends have created the need for deeper and wider channels, specialized terminals and additional rail and road links.

The Gulf Intracoastal Waterway, maintained by the U.S. Army Corps of Engineers, is a 1,100-mile long, man-made waterway that connects ports from Texas to Florida. Texas’ 406-mile section of the waterway handles 63 percent of its traffic, much of it shipments of chemicals and petroleum-related products.

The federal government maintains the waterway and supplies half the funding needed to build new facilities and rehabilitate existing ones along the waterway. TxDOT’s needs estimates include seaports and waterways in the “non-highway freight” category. The agency estimates seaports and waterways need $800 million in additional funding by 2040 to remain in good condition.

In February, the White House unveiled its plan to boost the nation’s transportation infrastructure. As written, the plan would provide $200 billion in federal funding, with $50 billion reserved for rural communities, which is intended to spur $1.5 trillion in total investments, including contributions from state and local governments as well as the private sector. Its passage is by no means certain, however, and legislators have expressed doubts that the plan will be voted on, or even debated, in 2018.

Yet the money must come from somewhere. The state’s transportation needs are booming along with its cities, and our economy depends heavily on the free flow of goods by truck, train, plane and ship. An efficient transportation infrastructure is essential to fostering economic growth and ensuring our citizens’ lives are healthy and prosperous. FN