Texas’ long-term obligations must be addressed at some point, and the longer we wait, the higher their cost will be. Inaction will simply cause these problems to snowball, lowering the state’s credit rating, raising our cost of borrowing and putting the state’s financial stability at risk.

Most of the available strategies, however — such as raising member contributions, reducing benefits and increasing state debt — would create their own problems and may be unacceptable for many voters and lawmakers. And in tight budget times such as these, using general revenue to quickly retire these obligations simply isn’t feasible.

Fortunately, Texas has the tools it needs to begin addressing its long-term obligations, starting with its Economic Stabilization Fund — often called the “rainy day fund.” At the end of fiscal 2017, the ESF balance was nearly $10.3 billion; barring any appropriations from the fund, it’s expected to rise to nearly $11.9 billion by the end of fiscal 2019, an amount equal to about 11 percent of the state’s total appropriations for fiscal 2019 (Exhibit 10).50 It’s the nation’s largest reserve fund and the third largest as a share of annual state expenditures.51

The ESF is a budget management tool designed to stabilize volatile revenue swings and to protect state finances against economic shocks and downturns. It’s supported mainly by revenue from oil and natural gas severance taxes. The Legislature proposed the ESF as a constitutional amendment in 1987, after a period of massive budget shortfalls caused largely by cratering oil and gas markets. By dedicating a portion of severance taxes to the ESF, Texas could save during severance tax windfalls and use the proceeds to reduce the volatility of its budget. 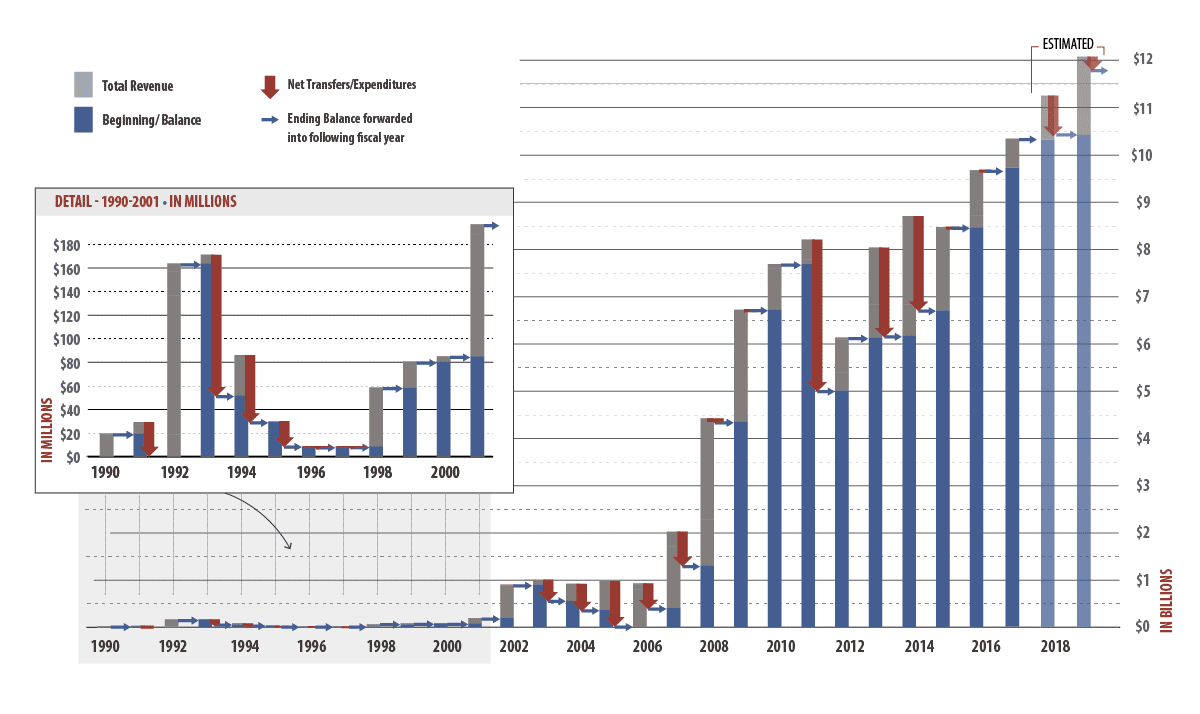 The Legislature’s original intent was to maintain a relatively small ESF in highly liquid investments for immediate use. The fracking boom of the last few years, however, poured billions into the fund, far more than is needed for immediate liquidity. Yet the bulk of it is still invested in short-term instruments currently yielding about 2.1 percent, not even enough to meet the current inflation rate (as of Aug. 31, 2018) of 2.7 percent. In effect, the state is losing purchasing power and leaving money on the table that could be raised through common, prudent investment strategies.

In recent years, the Legislature has taken small steps to remedy this situation. The 2015 legislative session created the Texas Economic Stabilization Investment Fund (TESTIF), a portion of the ESF that the Comptroller can invest to achieve net returns that at least meet inflation.

The portion of the ESF that can be invested in this way is the amount exceeding a “sufficient balance” — the amount the state requires to be readily available in short-term investments. This balance is set by a joint House-Senate committee prior to each legislative session. The balance was set at $7.5 billion for the 2018-19 biennium.

As of May 31, 2018, the amount above the sufficient balance totaled more than $3.2 billion, and the cumulative return on this TESTIF portion was about 5.6 percent, or $72 million dollars more than would have been earned if the total ESF balance had remained in the corpus of the fund, the Treasury Pool.52

There are, however, other ways the ESF could be used to benefit the state. The creation of an endowment fund from a portion of the ESF, for example, could produce billions in earnings for the benefit of future generations of Texans. Such investment funds and strategies are hardly novel — Texas and Oklahoma are the only “energy” states without such a plan, and in November, Oklahoma voters will vote on creating one for their state.

The Comptroller proposes that the ESF portion exceeding the sufficient balance be placed in a new Texas Legacy Fund. This fund would be invested for higher returns and its earnings would be used to retire long-term obligations, leaving the principal untouched. Texas already has many permanent funds that function in this way, including the Permanent School Fund, which generates earnings for public education, and the Permanent University Fund, which supports public colleges and universities.

The Comptroller also proposes that the more conservative TESTIF investment strategy be applied to the sufficient-balance portion of the ESF, so that the purchasing power of the entire ESF balance can be maintained.

Under this proposal, investment earnings from the Legacy Fund would be dedicated to addressing long-term obligations and other state priorities as defined by the Legislature. The Legacy Fund would be outside general revenue, so any appropriations from it would not count against the state’s pay-as-you-go budget.

The Texas Legacy Fund would be managed by the Texas Treasury Safekeeping Trust Company, which is directed by the Comptroller. The trust company oversees $60 billion in assets including 14 separate endowment funds with assets totaling more than $4 billion, such as the Tobacco Settlement Permanent Trust Account and the National Research University Fund.

The sooner the state implements a stronger investment strategy, the more it will benefit. If, for instance, the state had invested the entire sufficient balance in 2017 in the same way that the TESTIF is invested, projections indicate it could have earned an additional $64 million during the 2018-19 biennium.

Over time, Legacy Fund revenue growth would accelerate dramatically. At present, the ESF contains $3.1 billion more than the sufficient balance. If it were invested today as the Legacy Fund, the state could be earning $111 million annually on that investment by 2020-21. In 10 years, annual distributions could hit $955 million, with a cumulative distribution to that point of nearly $3 billion.

Whether the Texas Legacy Fund is established or other proposals are enacted, Texas’ budget challenges won’t be resolved overnight. These proposed reforms represent long-term solutions for long-term challenges, giving us the tools we need to systematically and aggressively chip away at our obligations and avoid potential credit downgrades. FN