The ERS plan is a defined benefit plan (DBP) — a mandatory plan offering set monthly payments based on years of service and the employee’s highest salary, a type increasingly rare in the private sector. Both state and employee contributions made throughout working careers are invested to guarantee specific payments upon retirement.

Investment returns, generated primarily by bonds, stocks, private equity and real estate, accounted for 64 percent of the plan’s revenue between 2003 and 2016.4 Although both the state and its employees contribute, the state as plan provider bears the investment risk.

At the end of fiscal 2017, the ERS Retirement Trust Fund had $26.4 billion in assets. Its accrued liability, however — the total amount needed to meet all future pension obligations on the books — totaled $37.6 billion, resulting in an $11.3 billion unfunded actuarial accrued liability, or UAAL (Exhibit 1).5 This unfunded liability has been rising steadily. The UAAL rose by $10 billion between 2007 and 2017 and by $2.5 billion between 2016 and 2017 alone.6

The financial status of a pension fund such as the ERS trust fund is reflected in its funded ratio, its assets divided by its liabilities expressed as a percentage. A fully funded plan, then, would have a funded ratio of 100 percent or more.

Traditionally, a pension plan was considered actuarially sound with a funded ratio of 80 percent or greater; today, however, actuaries and credit rating agencies increasingly consider a variety of factors in assessing a fund’s health, including the size of its obligations, its funding policies and its investment strategies.7 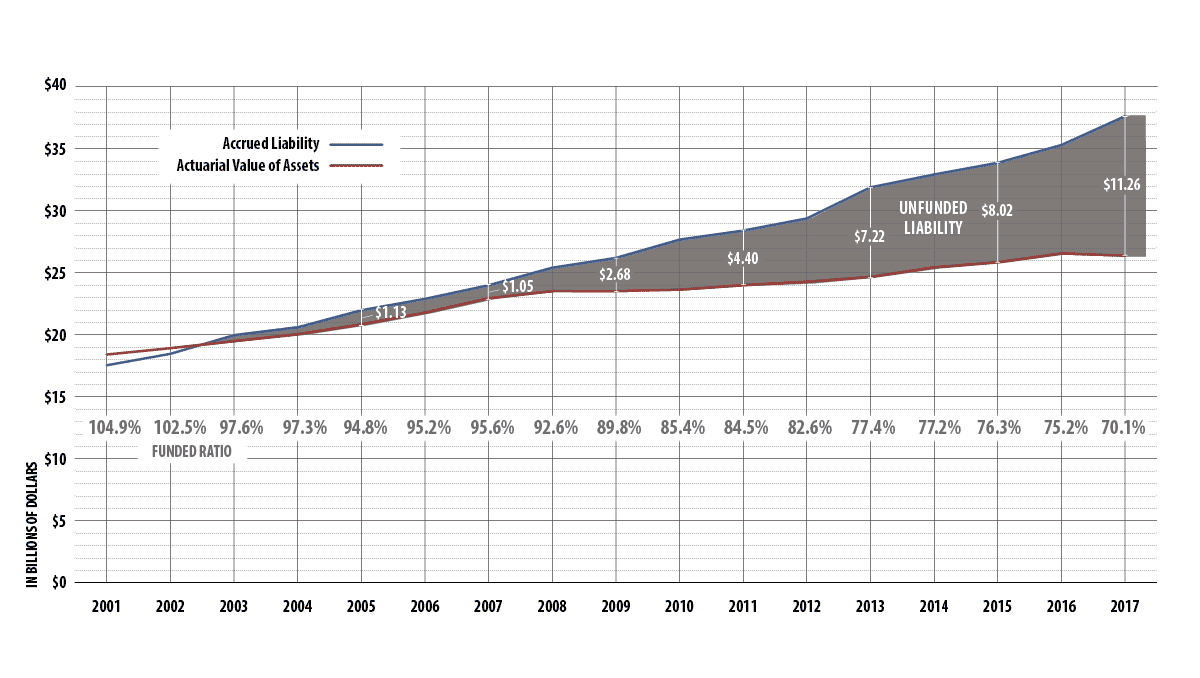 From 2009 to 2015, the Texas Legislature passed various laws addressing the ERS plan’s growing unfunded liability by increasing employee contributions (in 2009 and 2015); raising the minimum retirement age (in 2009); increasing the length of the service period used to determine the final average salary, and thus the pension payment (in 2009 and 2013); and making other adjustments.17

The most recent legislation concerning ERS operations — Senate Bill 301, approved in 2017 — strengthens the ERS board’s oversight of “alternative investments,” such as private equities, private real estate or hedge funds. In recent years, these alternatives (as opposed to more traditional public equities) have represented a rapidly increasing share of ERS’ investments. The new law also requires the ERS board of trustees to approve any individual alternative investment above $100 million and requires a vote to be taken in public. Finally, the law requires ERS to study and adopt new actuarial assumptions once every four years, rather than every five.18

Despite recent legislation, the financial health of the ERS plan continues to decline. Any change to government pension plans can involve significant challenges and may have unforeseen consequences.

Proposed options to improve the funding status of the ERS plan include:

The current multiplier for regular employees in the main ERS plan is 2.3 percent. It’s been in effect since fiscal 2002.