A Storm to Remember:
Hurricane Harvey and the Texas Economy

Appendix 1: Major Hurricanes in Texas and the U.S. —
A Historical Perspective

In a typical year, about 100 storms and tropical disturbances develop in the Atlantic Ocean, Caribbean Sea and Gulf of Mexico. Some of these turn into tropical storms, and on average, two each year become hurricanes that make landfall in the U.S.40 Between 1851 and 2016, 289 hurricanes affected the continental U.S. Of these, 63 made landfall in Texas.41 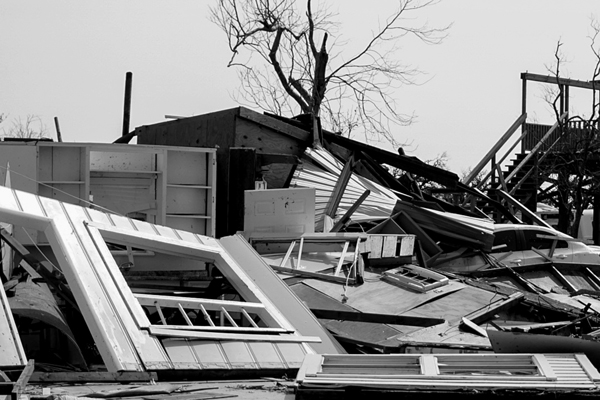 Hurricane season runs from June 1 to Nov. 30, with most storms making landfall during August and September.42 In Texas, these storms make landfall on the Gulf Coast, generally moving north or northeast through the state.

The Galveston hurricane of 1900, a Category 4 storm, was the deadliest natural disaster in U.S. history, bringing a 15-foot storm surge and winds of more than 135 mph. The hurricane killed between 6,000 and 12,000 and brought damages totaling about $881 million in 2017 dollars.43

Since then, Texas has been affected by 20 more major hurricanes (classified as Category 3 or higher).44 Exhibit 5 lists major hurricanes that have made landfall in Texas since the early 1950s, when the U.S. National Hurricane Center began naming each storm.

Of course, hurricanes and other major storms affect the entire country, not just the Gulf Coast. Exhibit 6 lists the most destructive storms affecting the U.S. in the last half-century.

Hurricane Katrina, which caused $161.3 billion in damages, still ranks as the costliest storm in American history; Hurricane Harvey is expected to rank second, with total estimated damages of about $125 billion.45