A Storm to Remember:
Hurricane Harvey and the Texas EconomyIntroduction

Late last August, Texans watched and waited anxiously as Hurricane Harvey approached our state. Born in the Atlantic Ocean as a tropical storm, Harvey intensified rapidly to a Category 4 hurricane in the Gulf of Mexico and hurtled directly toward the Texas coast. 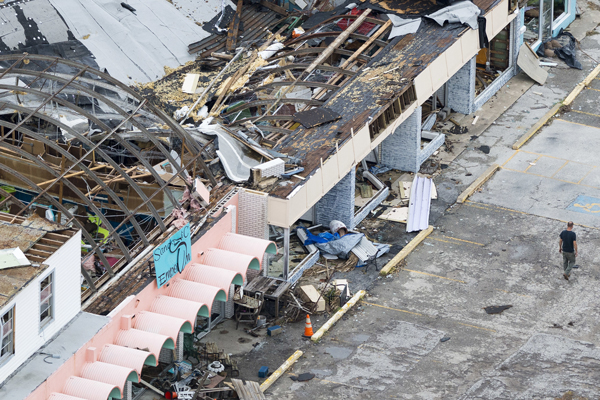 Aftermath of Harvey in Rockport, Texas.

On Aug. 25, 2017, Harvey made landfall, devastating Port Aransas, Rockport and other nearby communities with 130 mph winds and a six-foot storm surge. Swinging north, the hurricane moved into the Houston area, bringing thunderstorms and tornados that caused extensive damage.

Although it downgraded to a tropical storm as it moved inland, Harvey wasn’t through spreading havoc. The storm lingered in Texas for several days, bringing record-breaking rainfall and catastrophic flooding to the southeastern part of the state. Parts of the Houston metro area recorded more than 50 inches of rain in a four-day period, while inland communities such as La Grange, Bastrop and Smithville saw massive flooding as the Colorado River overflowed its banks.1

The Saffir-Simpson Hurricane Wind Scale classifies hurricanes and tropical storms according to their maximum sustained wind speeds (Exhibit 1). A “major” hurricane is defined as one at Category 3 or higher.

Once the danger passed, it was clear the hurricane had caused dozens of deaths and billions of dollars’ worth of physical damage to homes, buildings, vehicles and basic infrastructure in the affected areas.

Texans have weathered many major storms through the years, but Harvey — the strongest hurricane to hit Texas since Carla in 1961 — was particularly devastating.2 According to data collected by the Texas Division of Emergency Management as of Nov. 30, 2017, Harvey damaged or destroyed more than 178,400 Texas homes and inflicted an estimated $669 million in damage to public property such as government buildings, roads, bridges, water facilities and electric utilities.3 October estimates from the Texas Department of Motor Vehicles suggested flooding may have ruined from half a million to a million cars and trucks, although more recent estimates put the number at around a quarter-million vehicles.4

Harvey also exacted a high cost on many of the state’s industries. According to the Texas A&M AgriLife Extension Service’s most recent estimates, the storm caused more than $200 million in Texas crop and livestock losses.5 The coastal tourism industry suffered crippling damages, especially in Rockport-Fulton, where the Chamber of Commerce estimates winter tourism was down by 50 percent. Other economic sectors — particularly manufacturing, energy, chemical production and retail sales — suffered damage to structures and equipment and, in many cases, experienced significant and expensive downtime due to flooding, lost electrical power, employees’ inability to get to work and other situations causing temporary disruptions to the flow of goods and services.

Most businesses in the affected areas had to close in the immediate aftermath of the storm, although the period of lost production varied. Many encountered structural damage, floodwater, debris and downed utilities.

This is a preliminary analysis. We may not know the full impact of Hurricane Harvey for years. But the National Center for Economic Information has predicted Harvey will prove to be one of the most expensive natural disasters in U.S. history, perhaps second only to 2008’s Hurricane Katrina.6 The most recent estimate from the National Oceanic and Atmospheric Administration estimates Harvey’s total costs at $125 billion.7 Once actual damages and repair costs are determined, the cost may be even higher.

Although the losses stemming from Hurricane Harvey are enormous, they will be counteracted, to some degree, by economic activity — primarily reconstruction and repair — following the storm. To estimate the full economic change resulting from the storm, we must consider not only losses but gains.

A History of Hurricanes

To put Harvey’s costs in perspective, consider previous storms with similar characteristics. These storms shared many similarities with Harvey in their effects on lives, homes and infrastructure.

Tropical Storm Allison (June 2001): Like Harvey, Allison was responsible for severe flooding in the Houston area, dropping more than three feet of rain in four days and producing 23 tornadoes. Allison caused 43 deaths and damages estimated at $8.5 billion (or $11.9 billion in 2017 dollars), making it one of the most deadly and expensive weather events in Texas history.8

Hurricane Katrina (August 2005): Katrina made landfall on the Louisiana and Mississippi coasts as a Category 3 hurricane, bringing a 20- to 30-foot storm surge and strong winds that damaged many levees, flooding more than 80 percent of New Orleans and causing at least 1,833 deaths in five states.9 With damage costs estimated at $125 billion ($161.3 billion in 2017 dollars), Katrina remains the costliest storm in U.S. history.10

Hurricane Rita (September 2005): Rita made landfall near the Texas-Louisiana border as a Category 3 hurricane with sustained winds reaching 115 mph. Rita’s 10- to 15-foot storm surge, combined with up to 15 inches of rain in some areas, caused extensive flooding and wind damage.11 Rita caused 119 deaths and an estimated $18.5 billion in damages ($23.9 billion in 2017 dollars).12

Hurricane Ike (September 2008): Ike, a Category 2 hurricane, hit Galveston with winds of up to 110 mph and a 20-foot storm surge. In addition to causing 112 deaths, Ike damaged oil platforms, storage tanks, pipelines and refineries, causing gasoline shortages in the southeastern U.S. The storm caused an estimated $30 billion in damages ($34.8 billion in 2017 dollars).13

Post-Tropical Storm Sandy (October 2012): Sandy, originally a Category 3 hurricane, hit the northeastern U.S. with a storm surge of up to 12 feet and about a foot of rain.14 Sandy damaged or destroyed thousands of businesses and hundreds of thousands of homes.15 Total damages were estimated at $65 billion ($70.2 billion in 2017 dollars), making Sandy the second-costliest storm in U.S. history after Katrina until Harvey.16