A Storm to Remember:
Hurricane Harvey and the Texas EconomyFuture Mitigation Opportunities

A storm as devastating as Hurricane Harvey inevitably is followed by efforts to mitigate the effects of future storms. Hazard mitigation is any sustained action taken to reduce or eliminate the risks and impacts of natural hazards, such as floods, tornadoes and severe winter storms.24 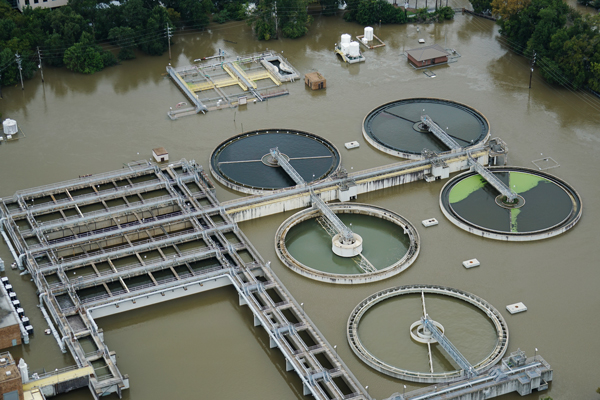 Recovery efforts are more expensive than mitigation efforts, but many believe the nation hasn’t adequately funded the latter. According to Larry Larson, a senior policy adviser at the Association of State Flood Plain Managers, the U.S. has spent about $300 billion responding to various natural disasters, but only $600 million on mitigation. Yet mitigation spending has a four-to-one payback ratio.25

Houston has two reservoirs, Addicks and Barker, created by earthen dams in the 1940s to address downtown flooding. Neither was designed to contain the volume of water they’ve received in the last three years, and both need repairs. In 2009, the U.S. Army Corps of Engineers classified both as “unsafe” and called for more than $100 million in dam repairs and maintenance, but to date the repairs have not been completed.26

Perhaps the best-known proposal for hurricane mitigation along the upper Texas coast is the “coastal spine,” also known as the “Ike Dike” — a concept, borrowed from the Dutch, which would involve a line of coast barriers, levees and gates to protect Galveston Bay and the Bolivar Peninsula. The Gulf Coast Community Protection and Recovery District has recommended the construction of a 277-mile line of these features at a cost of $11.6 billion.27 The U.S. Corps of Engineers, however, must recommend a similar plan before Congress will fund its construction; the Corps’ recommendation is expected by June 2018.28

Mike Talbott, a former executive director of the Harris County Flood Control District, says another solution is to widen some of Houston’s thousands of miles of bayous, allowing them to carry more water to the Gulf of Mexico. According to Talbott, this would cost about $25 billion. At the district’s current funding levels, however, protecting this stretch of coast to 100-year-flood protection levels would require 400 years.29 Governmental partnerships would be needed to fund such large-scale projects, but the 2011 ban on Congressional earmarks, which discourages federal legislators from devoting funds to home-state “pet” projects, has made such funding difficult to obtain.30

Yet another idea concerns repairing Houston’s outdated drainage system. According to Texas A&M Professor Sam Brody, a specialist in natural hazard mitigation, the city’s drains and pipes are old and inadequate, able to handle only one to one-and-a-half inches of rain per hour.31 The city of Houston estimates 60 percent of its drainage infrastructure needs repairs that would cost about $650 million annually.32

Non-structural measures include those that do not involve massive changes to existing infrastructure.

One contentiously debated issue affecting Houston is the city’s rapid rate of growth and development. More than 166,000 acres in the area have been paved in the last 10 years, greatly increasing the flow of floodwater into bayous, reservoirs and drainage systems.34

The temporary accumulation of water after heavy rains, as in the Addicks and Barker reservoirs, is called a “flood pool.” Of the 10 largest U.S. flood pools accumulated after storms, six occurred since 2000. Richard Long with the U.S. Army Corps of Engineers says new growth and development, with concrete replacing prairie lands, directly causes flooding in previously vegetated areas.35 City planners must take such factors into account when approving new development.

FEMA, in cooperation with state and local officials, creates Flood Insurance Rate Maps (FIRMs) for every community in the U.S. These maps delineate special flood hazard areas — those judged to have a 1 percent chance of flooding in any year, sometimes called the 100-year flood plain — and “risk premium zones,” areas in which insurance companies may charge higher premiums due to an increased risk of flooding. Depending on the classification of the zone, these premiums may be considerably higher than in nearby areas.

It typically takes three to five years to complete the study for a FIRM, which forms the basis for National Flood Insurance Program (NFIP) regulations (see next section) and the insurance requirements that accompany mortgages. FEMA periodically revises these maps to reflect population growth and development or changing conditions that may lead to increased risk of flooding. Due to funding constraints, however, FEMA can update only a limited number of flood plain maps each year, and many researchers contend flood maps often fail to reflect current conditions.

Houston provides a case in point; FEMA estimated about 40 percent of all buildings flooded in Harris County were in areas considered to be “of minimal flood hazard.” Similarly, researchers at the University of California at Davis determined half of the flooded land in Harris County was outside the boundaries of official flood maps. As a result, many buildings and homes lacked flood insurance.36

According to the Harris County Flood Control District, more than 140,000 Houston-area homes are in flood plains, and thousands of them should be purchased by the city, county, state or federal governments to remove them from future floods.37 Updated flood plain maps may require thousands more homes to be removed in this way.

The federal National Flood Insurance Program, established in 1968, subsidizes flood insurance on homes in special flood hazard areas, which may encourage developers to build more homes in flood plains. The program has outgrown its scope, however, and is currently $24 billion in debt.38 Scaling back the subsidies offered through NFIP would make the cost of insurance prohibitive for some homeowners and deter them from buying homes in flood-prone areas.39 FN

State agencies serve Texas residents in good times and bad. During the devastating hurricane of August 2017, the Comptroller’s office took this commitment to heart.

The Comptroller’s office has locations across Texas. Some field offices in Houston, Beaumont, Corpus Christi and elsewhere experienced brief, storm-related closures, but the Comptroller’s Taxpayer Services staff in Austin fielded hundreds of calls and emails about tax payments. The agency granted businesses in affected counties temporary extensions to file taxes.

But the Comptroller’s hurricane relief efforts extended well beyond taxes. The Comptroller’s Statewide Procurement Division (SPD) plays a lead role in the State of Texas Emergency Management Plan and the state’s Emergency Management Council. During disasters, the governor can suspend state purchasing laws with the issuance of a disaster proclamation, allowing SPD to get emergency supplies and equipment to first responders and Texans in need as quickly and efficiently as possible.

In a single weekend, SPD staff initiated purchases of more than $15 million for mobile fueling stations, a fleet of 650 evacuation buses, bottled water and ice, showering stations, portable toilets, heavy equipment for recovery efforts and other items for emergency shelters and rescue efforts.

It wasn’t the first time. SPD worked with the Department of Public Safety’s Texas Division of Emergency Management to support recovery efforts during hurricanes in 2005, 2007 and 2008; the Bastrop fires in 2011; the West fertilizer plant explosion in 2013; and many other disasters.

Our own Comptroller family also was affected by Harvey. About 20 employees experienced flood damage; at least one of our Houston-area employees lost his home. In response, agency employees hosted fundraisers to purchase supplies for fellow workers affected by the hurricane and took food, bottled water, clothes, cleanup supplies and gift cards to storm-ravaged areas.

“It was a very pleasant surprise when employees from Austin walked into our office with care packages wearing ‘Houston Strong’ T-shirts,” says Houston Northwest Enforcement Office Manager Jesse Vela. “We had office staff who had property damage, had to be rescued and even had to be evacuated. But thankfully, considering all the damage that occurred throughout the Houston area, we didn’t have a loss of life.”

The Comptroller’s office is here to help Texans, from expedited purchasing of emergency equipment and supplies, special licenses for motor fuel imports, tax deadline extensions and more. We’ll continue to assist in this situation and any other that arises. 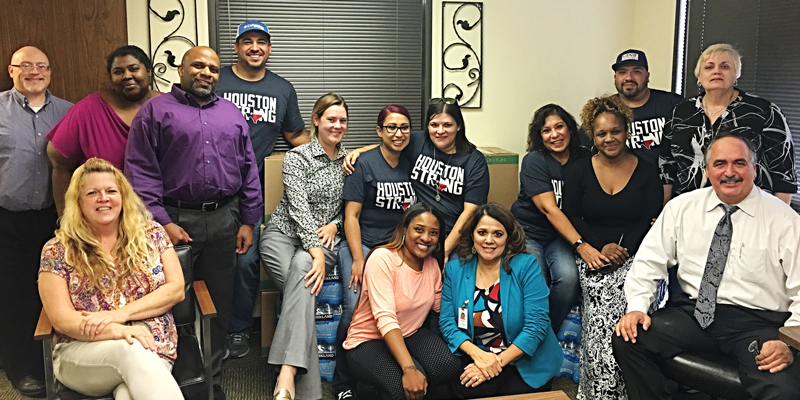