In 1993, the Texas Legislature created a new category of criminal punishment, designating dozens of low-level felonies and some Class A misdemeanors as “state jail” offenses, mostly for first-time, nonviolent offenders. The intent was to create a less restrictive and more cost-effective setting than prison, with an emphasis on treatment, rehabilitation and successful re-entry to society.

But the jury’s still out on how well the state jail system has worked — and whether it should be modified or scrapped altogether. The system was the state’s “first major effort to de-incarcerate people,” says Tony Fabelo, a criminal justice expert and one of the system’s chief architects. But “history has taken its toll … much has changed.”

Unlike county and municipal jails, state jail facilities aren’t intended for those awaiting trial or serving brief sentences for misdemeanors. State jail inmates are convicted felons, although they serve shorter sentences than most of those incarcerated in conventional prison units.

State jail felonies are punishable by a minimum of 180 days to a maximum of two years in jail as well as fines of up to $10,000. Most inmates are serving time for property- or drug-related offenses (Exhibit 1).

Texas operates one of the world’s largest prison systems, and in the early 1990s it was so overcrowded that some 35,000 convicted felons were being held in county jails while awaiting prison beds. According to the Texas Commission on Jail Standards, from fiscal 1994 to 1996 TDCJ paid $415 million to county jails to reimburse them for the costs of holding state prisoners.

Today, Fabelo is a senior fellow for justice policy at the Meadows Mental Health Policy Institute in Austin. In 1993, however, he was the director of the state’s now-defunct Texas Criminal Justice Policy Council. There, he helped design a two-pronged approach to reform patterned in part after Travis County programs: a new felony category for lesser offenses such as small-quantity drug possession, with shorter sentences combined with more treatment, supervision and community integration.

The original state jail-related statutes of 1993 required judges ordering a state jail sentence to immediately suspend it and place the offender under community supervision (probation), although judges also could require defendants to serve a state jail term prior to probation. Probation violations would lead to further incarceration in a state jail. In 1995 and 1997, subsequent laws allowed for direct sentencing to a state jail facility and removed the requirement for mandatory probation.

Since the first state jail opened its doors in 1995, various laws gradually have reduced the number of people sentenced to these facilities. The population held in state jails, called state jail felons (SJFs), peaked at nearly 16,000 around 2003. In 2018 legislative testimony, TDCJ Executive Director Bryan Collier reported that the state jail population declined by more than 39 percent between 2010 and 2018. 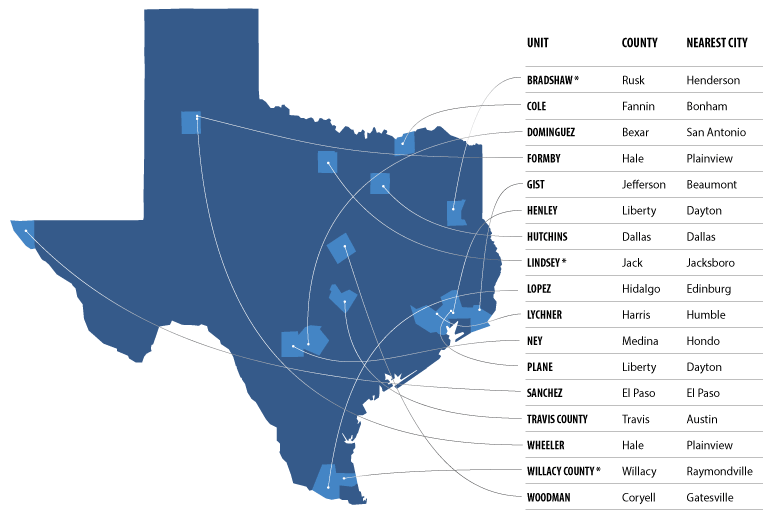 In 1995, the Legislature allowed defendants eligible for state jail to opt to serve their sentences in local jails or to be prosecuted for Class A misdemeanors, which involve lesser penalties without state jail time and, usually, no probation requirement. Many take this route.

Since 2011, moreover, state jail inmates have been able to reduce their sentences by up to 20 percent by completing work or treatment programs offered by state jails. For this “diligent participation” credit to apply, a judge must approve it after program completion. TDCJ reports that, on average, more than half of SJFs participate in some programming while incarcerated; half of those discharged in fiscal 2018 used credits to reduce their stays by an average of 40 days.

The Texas state jail population declined by more than 39 percent between 2010 and 2018.

Chief Financial Officer Jerry McGinty of TDCJ says the agency tries to address some of the needs of state jail felons and give them tools to succeed. “The state jail system does exactly what it was intended to do,” he says. “It’s not broken.”

TDCJ Chief of Staff Jason Clark also attributes the declining number of state jail inmates to the rise of specialty courts, which hear cases involving specific types of defendants such as persons delinquent on child support payments and those with mental health issues. Texas now has 182 of these courts. Other factors he cites include pre-trial diversion programs, which allow criminal defendants to avoid incarceration by completing work-release programs or substance abuse treatment, and local alternatives to incarceration such as community supervision, restitution, community service and electronic monitoring.

TDCJ has closed two state jail units, both privately run — Dawson, in downtown Dallas, shuttered in 2013 and recently sold to a local nonprofit, and Bartlett, northeast of Georgetown in Central Texas, in 2017. About 18 percent of the system’s total population has been residing in three remaining privately run facilities, but, as of late June, one of them (Willacy near Raymondville in the Lower Rio Grande Valley) housed no SJFs at all.

Ironically, today Texas’ state jails house more than twice as many higher-level felons awaiting transfer to prison as they do SJFs, as well as some inmates undergoing various treatment programs. On May 31, 2019, Texas’ state jails housed 6,226 SJFs (with 116 temporarily assigned elsewhere); 14,573 pre-prison transferees; and 254 felony substance abuse offenders. The transferees typically committed nonviolent crimes and may remain in a state jail for as long as two years.

Critics contend that this defeats the purpose of state jails. “[They] are largely not fulfilling the original mission for which they were created,” says Marc Levin, vice president of criminal justice at the Texas Public Policy Foundation in Austin.

Fabelo says, however, that prison overcrowding did in fact ease and crime declined after state jails were built. “It’s not a failure in the historical context,” he says, given the pressures Texas faced at the time.

Sources: Texas Department of Criminal Justice and Legislative Budget Board

As Levin and other critics have pointed out, state jails seem to have done little to reduce recidivism, new offenses committed by ex-convicts. White notes that substance abuse treatment, originally a key component of the system, hasn’t been improved or enhanced.

Today, Texas’ state jails house more than twice as many higher-level felons awaiting transfer to prison as they do SJFs.

According to a January 2019 interim report (PDF) by the Texas House Criminal Jurisprudence Committee, “The treatment and programming concepts state jails were originally designed around … were never funded or developed, so state jails now offer nearly nothing in the way of rehabilitative services.” During a 2003 budget crisis, the Legislature slashed state jail treatment funding, and much of it has not been restored. In any case, some state jails reportedly lack space for treatment programs.

The interim report also noted a lack of after-care programs for those released from state jail. A 2019 Legislative Budget Board (LBB) report (PDF) noted that just 0.4 percent of those released from state jails in fiscal 2015 entered probation. Between 2015 and 2018, 31 percent of SJFs were reincarcerated after release, versus 28 percent of those on probation and just 20 percent of former prison inmates. Some believe that a lack of post-release supervision is the main reason for SJFs’ higher recidivism rates.

Interim legislative studies also have found that many persons sentenced for state jail felonies take the option to do the time in local jails, many of which offer credits to shorten their sentences, because it’s quicker and easier than treatment or probation.

In late 2018 and early 2019, three Texas legislative committees recommended addressing the option that allows state jail felons to do their time in local jails; two would eliminate it altogether.

A TDCJ pilot program, approved in 2017 and funded this year, will discharge nonviolent felons from state jail months early to a work-release program operated by nonprofits. Levin says participants will serve 90 days in state jail, followed by a 180-day probation period coupled with 90 days of career and technical training, including job placement. TDCJ issued a request for proposals for this $5.3 million initiative in mid-June.

If any consensus is forming on how to fix the state jail system, it seems to focus on beefing up rehabilitation efforts by providing more services earlier in the process. Harris County often is mentioned as a model.

Teresa May directs the Harris County Community Supervision and Corrections Department (CSCD), one of the nation’s largest. She has been praised for creating a multi-faceted program relying heavily on social science research.

“Instead of revolving [them] in and out of state jail, now we address their needs,” May says. Among the innovations are offender risk and needs assessments; early intervention and rehabilitative services before prosecution; residential mental health treatment; and a reduction in pre-trial detention through more bond releases, thereby reducing jail time-served credits, which had created an incentive for SJFs to choose to serve their sentences there rather than in state jails.

Harris County has cut its share of Texas’ state jail inmates almost in half in five years, from 26 percent in fiscal 2014 to 14 percent in 2018. In this period, its re-arrest rates for SJFs on community supervision also fell sharply, from as much as 73 percent to roughly 26 percent.

“When people are diverted to treatment that addresses their needs,” May says, “they are less likely to be re-arrested." FN

For a look at Harris County’s jail reforms from the viewpoint of a former inmate, see Line Items.