by Spencer Grubbs and Amanda Williams

Pension plans are a helpful tool for government agencies seeking to recruit and retain qualified workers. While the public sector is rarely able to match private-sector wages, it can at least offer pensions that are relatively attractive by current standards. 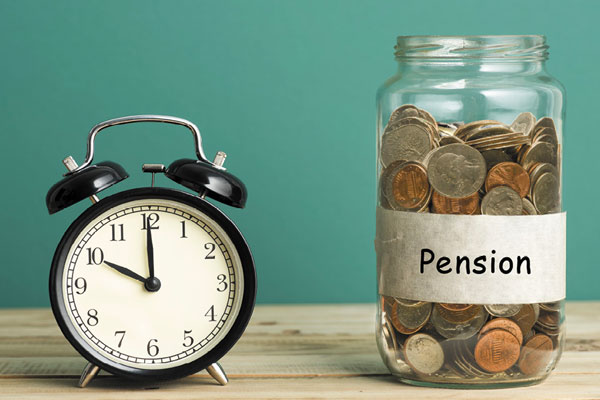 A pension provides monthly payments to employees upon retirement, generally based on their pre-retirement income and years of service to the employer. Both the employer and employee typically contribute a percentage of salary each month to a fund until the employee is “vested” — eligible to receive pension benefits from the fund after working a certain number of years — and has retired.

Pension plans generally employ one of two designs — defined benefit and defined contribution plans — or a combination of the two called a hybrid plan. These types differ in characteristics such as participation and contribution requirements and the value of benefits retirees receive.

While defined benefit plans are almost extinct in the private sector, most state and local governments still offer them.

Defined benefit (DB) plans are “traditional” pension plans. The employer establishes a retirement fund for all employees, manages its investments and uses a formula to determine each employee’s specific benefit amount upon retirement. Participation in a DB plan typically is mandatory, and benefit payments are guaranteed by the employer, which is responsible for investing the fund and bearing any related risk.

Defined contribution (DC) plans, also sponsored by employers, offer employees optional enrollment in individual retirement accounts such as 401(k)s. Both employees and employers may contribute to these accounts, although government employers generally do not. With a DC plan, much of the investment responsibility — and risk — rests with individual employees, who must select among plan options. Benefit amounts are not specified, but instead are based on the amount contributed and investment returns. Retirement payments thus depend on investment performance.

Hybrid plans typically involve mandatory contributions to both a DB and a DC plan, distributing the risk between employee and employer. The DB component provides employees with a guaranteed monthly annuity while the DC component gives them some control over their investment portfolios. As with traditional DB plans, employee participation in public hybrid plans usually is mandatory.

Another “hybrid” variation is the “cash balance plan,” which resembles a DB plan but with employer and employee contributions maintained in individual accounts rather than a pooled trust fund. The defined benefit, in turn, is stated in terms of an investment account balance at retirement, similar to a 401(k), rather than a defined monthly payment.

The number of state governments offering only DB plans to their employees has fallen, however, while the number offering hybrid plans has increased. At least 19 states have adopted hybrid or cash balance pension plans for at least some state workers, in an effort to distribute risk more evenly between employers and employees and better manage growing pension costs (Exhibit 1).

A sustainable public pension system offering defined benefits, the most common type, must balance its revenue (contributions and investment income) with its expenses (benefits and administrative costs). This balance can be assessed in a number of ways; the most basic is to compare a plan’s assets to its liabilities — the amount ultimately owed to its members. If the amount owed exceeds available assets, it has what’s called an unfunded actuarial accrued liability (UAAL). Put simply, public pension plans accumulate unfunded liabilities in every year in which their actual costs exceed their projected costs or revenue fails to meet projections. According to a 2018 report by the Pew Charitable Trusts, unfunded liabilities for America’s state retirement systems totaled $1.4 trillion in 2016.

According to the Pew Charitable Trusts, unfunded liabilities for America’s state retirement systems totaled $1.4 trillion in 2016.

The funded ratio is a plan’s assets divided by its liabilities, expressed as a percentage. Although public pension plans typically aim to achieve full funding (i.e., a 100 percent funded ratio) in the long run, the traditionally accepted standard for a reasonably healthy plan is 80 percent or more. The amortization period is an estimate of when a plan will become fully funded, based on its contribution rates and investment returns.

Setting a pension plan on track to pay down its UAAL requires the use of actuarial assumptions, or long-term estimates of future liabilities. Because these assumptions rarely match actual experience, most public pension systems evaluate and adjust them, if necessary, annually. Two actuarial assumptions play particularly important roles.

The first, the actuarially determined contribution, is the total contribution rate (from both employer and employees) needed to fund the normal cost of benefits and pay down any unfunded liabilities over a certain period, usually around 30 years.

The second, the assumed rate of return, predicts the amount of investment earnings generated by the fund’s assets. According to the National Association of State Retirement Administrators, an assumed rate of return that is “significantly wrong in either direction will cause a misallocation of resources and unfairly distribute costs among generations of taxpayers.”

In November 2018, the estimated median assumed rate of return for U.S. public pension investments was 7.38 percent. Yet a 2018 study of 44 state pension systems by the Pew Charitable Trusts found that actual 10-year total investment returns ranged from 3.8 percent to 6.8 percent, with an average of 5.5 percent.

None of Texas’ statewide retirement systems have a current funded ratio of 100 percent.

Exhibit 2 lists the seven statewide plans and their membership.

Of the seven statewide retirement plans, the Texas County and District Retirement System and Texas Municipal Retirement System both offer cash balance plans; the remainder offer DB plans. Together, the state systems serve more than 2.5 million members including public school employees, emergency personnel and state employees. The Employees Retirement System (ERS) acts as the administrative and investment body for its own plan as well as plans serving judicial and law enforcement officers (JRS II and LECOS in the above exhibit).

While none of Texas’ statewide retirement systems have a current funded ratio of 100 percent, five are at 80 percent or more and two are between 65 and 79 percent. The state’s Pension Review Board (PRB), which oversees all Texas public retirement systems, considers a system actuarially sound if it can eliminate its unfunded liability in a period of 30 years or less. Four of the seven plans, however, have amortization periods greater than 30 years (Exhibit 3); two have “infinite” amortization periods, meaning that, based on their current actuarial assumptions and contribution rates, they will never have enough money to pay for the current and future retirement benefits they owe.

*Data as received from the Pension Review Board as of December 2018. Effective dates vary.

The Teacher Retirement System (TRS) and ERS are Texas’ largest public retirement systems, serving about 1.5 million and 360,000 members, respectively. (It should be noted that ERS members also may choose to participate in a supplemental 401(k)/457 program to increase their retirement benefits.)

Together, TRS and ERS serve more than three-quarters of all state and local employees, dependents and retirees in Texas. During the last 10 years, the funded ratios of both systems have declined (Exhibit 4).

Based on PRB standards, neither TRS nor ERS is actuarially sound, with amortization periods of more than 30 years. The amortization period for TRS has been increasing since 2013 when it was at 28 years, while ERS’ has been “infinite” for all but two years since 2008.

Funded ratios and amortization periods are determined primarily by the rate of return on investments and contribution rates. Assumed rates of return are determined by the systems’ boards of trustees, based on their expectations for investment returns. The assumed rate of return for both ERS and TRS was 8 percent for many years, but in 2017 ERS reduced its assumption to 7.5 percent; TRS went to 7.25 percent in 2018.

The actual average rates of return, however, have consistently fallen short of 8 percent and even the revised assumptions. As of 2018, the 20-year rate of return was 6.48 percent for ERS and 7.0 percent for TRS.

ERS reports that another 3.62 percent of payroll contributed each year would return the plan to “actuarial soundness.”

To secure future pensions, contributions will have to increase, benefits will need to be reduced — or both.

The Legislature sets each system’s contribution rates, although the Texas Constitution requires the employer rate to be set at between 6 and 10 percent of total employee payroll. A measure introduced in the 2019 legislative session, Senate Joint Resolution 4 by Sen. Menéndez, proposes a constitutional amendment to raise the minimum to 7 percent.

For 2018, ERS reports that another 3.62 percent of payroll contributed each year would return the plan to “actuarial soundness”; TRS would require another 1.82 percent of payroll. ERS’ employer contribution rate, however, is currently at 9.5 percent, and individual agencies contribute another 0.5 percent, so the state is already at the 10 percent constitutional limit.

In recent years, the state has implemented changes to shore up the finances of ERS and TRS, but additional actions may be needed to reduce the gap between their assets and liabilities. These include changing plan designs, increasing state and/or member contributions, making additional state payments to the funds or reducing benefits for future participants.

Any major change to Texas’ public pension systems will be legislatively challenging, but action now to address shortfalls would help the state avoid the financial difficulties that have plagued other governments throughout the nation. FN

Note: TRS and ERS statements of additional payroll contributions needed to return the TRS and ERS plans to actuarial soundness are forward-looking statements, based on available data as of the statements’ dates, and are subject to unknown variables and changes over time (including future contribution rates, investment returns and plan or membership changes). Actual results could differ and the difference could be material.