As this issue went to press, the coronavirus was sweeping our state and the nation. The consequent shutdowns are having obvious impacts on Texas government and the state’s economy; the Comptroller’s office is monitoring the situation closely. Our May-June issue will begin the discussion.

The vision statement of the National Aeronautics and Space Administration (NASA) is “To reach for new heights and reveal the unknown for the benefit of humankind.” Space is its ultimate goal, but the space program also benefits those of us on Earth — and not least by aiding private companies.

While some popular tales of NASA “spinoffs” are urban legends — Velcro, Teflon and Tang breakfast drink all predate the space program — many space-related technologies and processes developed or fostered by NASA have made their way into the marketplace. For example:

“The agility and creativity of the companies we work with is incredible,” says Technology Transfer Officer Kris Romig, head of Commercialization Services at the Johnson Space Center (JSC) in Houston.

From Space to the Market

Making space flight pay off for the public has always been a NASA goal. Congress included commercialization requirements in the 1958 legislation creating the agency. NASA established a program to transfer space-related technologies to the private sector in 1962.

Each of NASA’s 10 field centers (Exhibit 1) has a technology transfer office employing a combined total of about 50 as well as contractors and support personnel. The agency currently maintains more than 1,400 active patents across 15 categories and has licensed more than 300 of them (Exhibit 2) but, according to Romig, patents only 5 to 10 percent of what it invents. Most of the software the agency employs is open source, and some of its technologies and processes are available for private use free of charge. 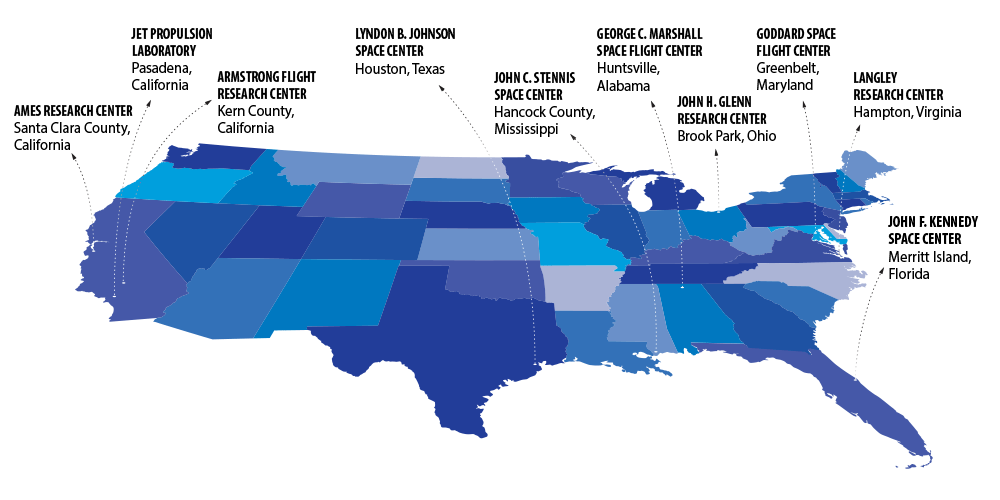 In the past 10 years, NASA’s emphasis has been on licensing, which often (but not always) grants the holder exclusive rights to the use of agency-developed technology. Romig says that NASA has issued about 650 patent licenses since 2010 and currently licenses about 100 to 150 more annually. They vary in duration and type, from research and evaluative licenses to long-term licenses, usually for 20 years.

American businesses take precedence, but international firms are allowed to participate as well, Romig says, noting that stipulations may be made on manufacturing locations. “We’re trying to improve the U.S. economy,” he says.

Gauging the economic impact of space commercialization efforts is problematic at best. Private licensees must submit annual financial reports with sales and revenue figures, but publicly held and other corporate entities do not, a data gap NASA hopes to close. A 2013 study conducted for NASA by the Tauri Group (now part of the nonprofit consultancy LMI) estimated the median annual revenue of each spinoff enterprise at $1 million, based on 2011 data.

A Cure for Bad Vibes

A chance encounter with NASA personnel several years ago led to a potential innovation in the way engineers counteract swaying in skyscrapers, bridges and other tall structures.

During testing of the Ares rocket prototype, slated as a manned launch vehicle until it was cancelled in 2010, dangerous levels of vibration emerged. This prompted NASA scientists to develop a fluid harmonic disruptor to “dampen” (reduce) vibrations during launch. On board the rocket, it was a spherical liquid oxygen tank. The adaptation for structures was essentially a 2-by-60-foot water-filled pipe fitted with a bellows.

NASA’s solution was a more elegant answer to a problem plaguing building construction for decades. Tall buildings often employ “tuned mass dampers” to absorb motion due to high winds and earthquakes. Typically, these are heavy spheres suspended by lines hung inside upper floors, where they function much like pendulums; some buildings use liquid-filled vats for the same purpose.

At a social event in 2015, the subject came up during casual conversation between a NASA scientist and a colleague of Elisabeth Malsch, a senior principal at Thornton Tomasetti, a multinational structural engineering firm with three Texas offices. Within days, she and some colleagues were watching a demonstration of a fluid harmonic disruptor at Marshall Space Flight Center in Huntsville, Ala.

Using weighted carts, NASA personnel moved a 300-foot rocket testing building back and forth while Malsch and company stood inside it on a stairwell. When they shut off the dampening device, Malsch says the movement became so pronounced they had to hold on to handrails to steady themselves.

Convinced there was an application for construction, Thornton Tomasetti obtained a research license to work on adapting NASA’s technology. A million dollars later, in collaboration with Canadian engineering consultancy RWDI, they’d produced the first fluid harmonic damper for buildings.

Dubbed “Hummingbird,” it’s a modular system of water-filled pipes or tubes that can be configured for virtually any space within a structure: walls, floors, ceilings or rooftops. “It’s easy to hide a pipe in a building,” Malsch says, “but not a ball or a vat.”

In 2016, the first commercial Hummingbird system was placed in a 35-story residential building in Brooklyn that was unusually susceptible to wind motion due to its slender shape and modular steel internal framework. It’s Hummingbird’s only perch so far, but that hasn’t stopped the partner firms from creating a company to market it.

Malsch says the architecture, engineering and construction industry is slow to adapt to change, making the innovation something of a hard sell. But NASA believes it also could be useful in automobiles, aircraft and ocean vessels, and even in moderating the effects of tides.

Austin businessman Chris Bilec has licensed the rights to an epoxy-based coating NASA designed to insulate rocket exteriors from extreme heat. He’s trying to find uses for this “phase-change reaction material” for aircraft, pipe heat traps, residential rooftops and food and beverage containers, among other things.

Bilec has developed an iceless cooler, but hasn’t sold any yet. “Maybe I’m not charging enough,” he says half-jokingly, adding that he’d like to emulate the success of Yeti, an Austin-based thermal container company.

Two other promising applications are gypsum board for fire-retardant construction and firefighting equipment and vehicles. Bilec says an Australian firm may distribute his product to firefighters who’ve been battling wildfires there, noting that it’s especially useful outdoors.

Bilec says the NASA license was affordable enough to purchase by himself, adding that it’s a good deal for smaller companies.

NASA also supports the private sector with mentoring and connections to private investors. Its iTech program conducts periodic forums to identify innovative technologies with potential applications in both the commercial and spaceflight realms. NASA reports that iTech participant companies have raised $500 million in private financing in just three years.

Jay Fraser’s firm, New Dominion Enterprises (NDE) of San Antonio, is developing additives to enhance the safety and durability of lithium-ion (LI) batteries, used in portable electronics, electric vehicles and a variety of aerospace applications. At NASA’s 2018 iTech Cycle III Forum, NDE bested almost 400 other competitors, finishing just outside the top three finalists. NASA declined to assist NDE at the time, but the company is moving ahead with testing and manufacturing its patented, three-phase technology.

“We’ll go back [to iTech] when we’re ready,” Fraser says, “when the product has been sold and is mature enough for NASA.” He remains in contact with key agency officials as well as his advisors at UT’s Austin Technology Incubator.

Assuming their efforts succeed, the veteran entrepreneur believes he and his business partner, research scientist Mason Harrup, are on the verge of a major breakthrough: a substantial improvement in the LI battery invented by UT-Austin Professor John Goodenough. The standard variety is subject to a limited lifespan and safety hazards due to its reliance on organic, flammable electrolytes, the substance that supports electric conduction within the battery.

Harrup thinks he has solved the problem. While working at the U.S. Department of Energy’s Idaho National Laboratory, he developed an inorganic, nonflammable electrolyte that extends a battery’s useful life. NDE has licensed the patent for the materials he invented while on staff. Along with this additive, NDE eventually plans to develop two other substances that, once perfected, should fully replace today’s conventional electrolytes in LI batteries.

“From everything we know in the published literature, we have the only inorganic liquid for lithium-ion batteries anywhere in the world,” Fraser says. “It could be the most important innovation since the LI battery was invented.”

If he’s right, it would have a significant impact not just on battery technology but virtually all electrified machines, especially electric vehicles, as well as on renewable energy — think wind turbines and solar power farms. As for NASA, NDE offers power-supply applications for the space station, Mars rovers and future moon bases.

“We’re poised to be a five-year overnight success,” he says.

For a fun, interactive look at space innovations that have become part of our daily lives, visit NASA’s Home and City webpage. The Comptroller’s office conducted a recent study of NASA’s impact in Texas, including its impact of more than $4.7 billion to the Texas economy and support of more than 52,000 total jobs in 2018.