In 1883, Galveston became the first city in Texas to install electric lights. It wasn’t long before power plants were built in other Texas towns and cities, providing energy for lights, appliances, elevators, pumps and industrial machinery, and transforming our lives in ways Benjamin Franklin couldn’t have imagined during his kite experiment on a stormy day in 1752.

According to the U.S. Energy Information Administration (EIA), Texas both produces and consumes more electricity than any other state. Texas’ abundant natural resources, including natural gas, coal and wind, are readily available to fuel our power plants.

So far, our electricity resources have kept stride through broiling summers and destructive hurricanes, but Texas power producers will be challenged to sustain this growth in the years to come — while accommodating social and technological changes that transform the way we produce and consume energy.

The Grid and Its Components 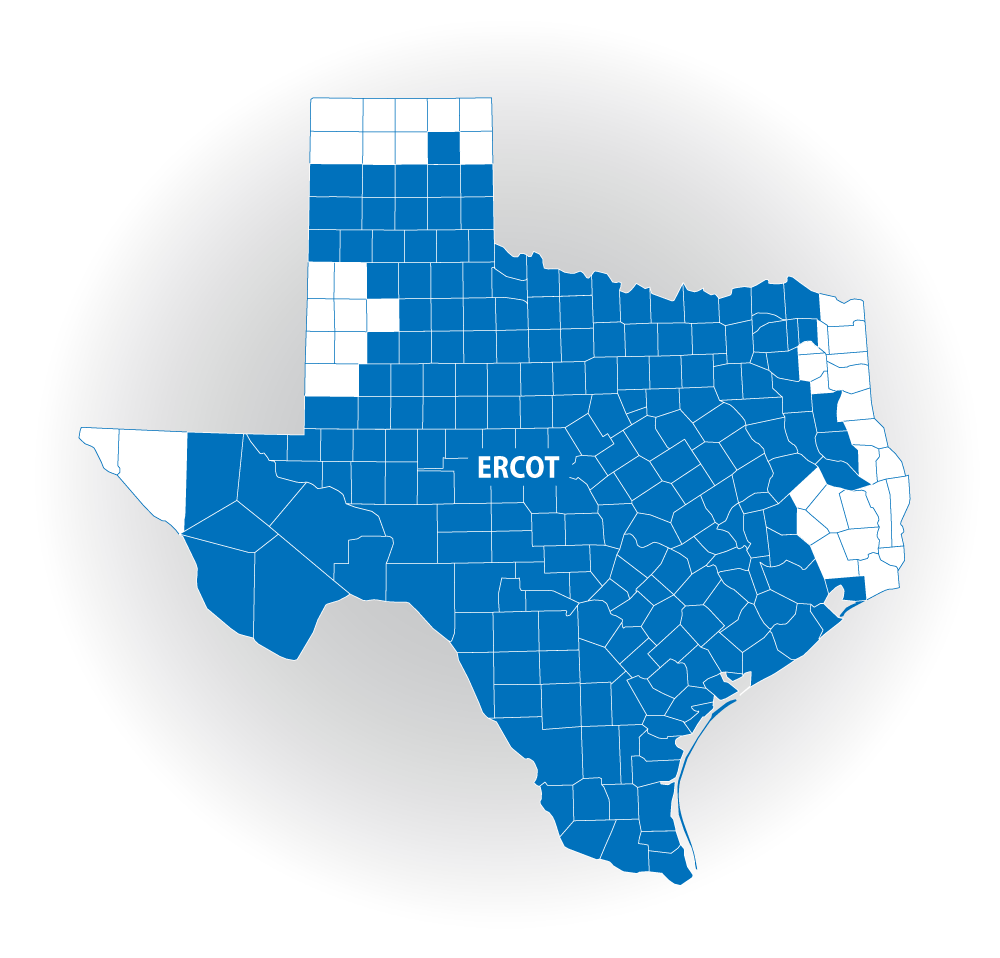 As the independent system operator for the Texas grid, ERCOT connects more than 46,500 miles of transmission lines and more than 650 power generation facilities, providing electricity to more than 26 million customers.

In Texas, several types of entities are involved in providing electricity to end users. The current structure dates from 1999, when the Texas Legislature introduced retail competition in much of ERCOT’s service area. According to ERCOT, about 75 percent of its total power load represents customers in these “competitive” areas.

In competitive areas, power generators produce electricity from fuel and sell it on the wholesale market, where it’s purchased by private companies called investor-owned utilities or retail electricity providers (REPs). Texas has about 300 REPs; customers can choose among them based on pricing and various options such as an emphasis on renewable power. Electricity purchased from REPs is distributed to homes, businesses and other facilities by transmission and distribution utilities, which own the actual poles, power lines and meters.

Texans living in areas outside the ERCOT grid or in areas served by municipally owned utilities (such as Austin Energy), electricity co-ops and river authorities rely on a single service provider. According to the Legislative Budget Board, as of September 2019, six of Texas’ 20 largest cities maintained their own utilities, the largest being San Antonio.

According to ERCOT, 1 MW of electricity can power about 200 Texas homes during periods of peak demand.

According to ERCOT, nearly half of Texas’ electricity was generated by natural gas-fired power plants in 2019. Coal-fired plants and wind power each generated about 20 percent, while the state’s two nuclear power plants — the South Texas Project near Bay City and Comanche Peak near Glen Rose — supplied a total of 11 percent. Solar, hydroelectric and biomass resources provided most of the remainder (Exhibit 2).

Texas’ fuel mix has changed considerably in the past decade. In 2009, coal-fired plants generated nearly 37 percent of the state’s electricity while wind provided about 6 percent. Since then, three Texas coal-fired plants have closed and the use of wind power has more than quadrupled, as more transmission lines bringing electricity from remote wind farms to urban market centers came online.

In the same period, our energy consumption rose by 20 percent. According to ERCOT, much of this growth can be attributed to new industrial facilities along the coast near Houston, as well as oil and gas activities in the Permian Basin. ERCOT’s most recent forecasts indicate that Texas’ electricity demands will continue to rise, although the pandemic and recession may alter consumption.

One factor that may affect ERCOT’s prediction models is the COVID-19 pandemic, which early analyses show to be reducing demand somewhat as it shifts consumption from commercial to residential use. In July, the EIA estimated that, due largely to the pandemic, U.S. power demand will decline by 4 percent in 2020.

A recent study by the Texas A&M Energy Institute showed a significant reduction in electricity consumption that correlates strongly with the rise in the number of COVID-19 cases and social distancing as well as declining commercial activity; these factors could have “a significant impact on the behavior of the electricity sector in the future.”

ERCOT began monitoring load impacts directly related to COVID-19 in March 2020. At this writing, its reports show weekly energy use running about 1 percent lower than expected.

According to ERCOT, the grid’s electrical demand reached a record high of 74,820 MW in August 2019, at a time when the state’s reserve margin — the amount of extra energy on hand beyond peak demand — fell to a historically low 8.6 percent. To protect the grid’s reliability and prevent uncontrolled outages during tight conditions such as this, ERCOT can declare an Energy Emergency Alert, which triggers certain procedures, such as rotating outages and public advisories to conserve energy, when operating reserves drop below specific levels.

Weather conditions — particularly Texas’ triple-digit summers — are a huge factor in predicting demand, since about half of Texas’ peak electricity use comes from air conditioning. ERCOT expects record-breaking electricity use again in summer 2020, even after the economic impacts related to the COVID-19 pandemic, but anticipates the state will have enough capacity to meet expected demand under normal conditions.

ERCOT keeps a close eye on the state’s reserve margin. Since last August, it’s returned to a relatively healthy 12.6 percent, with most of the additional generation coming from renewable sources. ERCOT expects the grid’s reserves to stay at acceptable levels for the next five years (Exhibit 3).

Renewable energy sources — mainly wind — contribute more than a fifth of Texas’ net electricity. Texas is the nation’s leader in wind-powered electricity generation, producing almost 30 percent of the U.S. total. According to the American Wind Energy Association, only four nations have more wind capacity than Texas.

In the first quarter of 2020, the Solar Energy Industries Association ranked Texas fifth among states in installed solar capacity, with 4,606 MW in place and an estimated 10,261 jobs tied to solar power. Sunny West Texas in particular offers excellent potential for solar energy and, as costs for photovoltaic panels fall and transmission access improves, the state’s solar capacity can be expected to increase; the Solar Energy Industries Association ranks Texas second nationally for projected growth during the next five years.

Electricity conservation helps Texans save money, but it also helps maintain the reliability of our electricity grid. When consumers use unusually high amounts of electricity — such as during extreme weather conditions — it puts a strain on power plants to keep up and, for those using fossil fuels, contributes to air pollution and potential climate change.

In 1999, Texas became the first state to establish Energy Efficiency Resource Standards (EERS), which require investor-owned electric utilities to reduce energy use and demand. The initial savings goal for each utility is equal to up to 30 percent of the utility’s annual growth in peak demand. After that target is met, the EERS require annual savings equal to up to 0.4 percent of each utility’s peak demand.

Since 1999, according to the National Conference of State Legislatures, 27 other states have implemented EERS. In 2017, those states achieved average annual incremental savings of 1.2 percent of retail electricity sales; states without EERS achieved average savings of just 0.3 percent.

Reliable electricity has become fundamental to modern life. While Texas’ electricity supply has increased each year, so has our demand. Ironically, the pandemic may provide a brief respite for utility companies, but the inevitable recovery, our population growth — and our unfailingly hot summers — mean that Texas will be challenged to increase and improve its power generation and transmission abilities for the foreseeable future. FN