According to the Texas 5G Alliance, the U.S. today has more mobile devices than people. But the next stage of mobile connectivity, a series of innovations collectively dubbed “5G,” promises to be an upgrade bordering on another industrial revolution, fueling advances in areas ranging from autonomous vehicles to remote surgery and factory automation.

In 2019, Mike Wood, an official with the International Electrotechnical Commission (IEC), predicted that 5G and internet-of-things (IoT) applications — sensors and communications technologies embedded in physical objects ranging from refrigerators to pipelines and heavy industrial equipment — would be widespread by 2025. By then, the number of connected IoT devices is projected to be 75 billion worldwide, a 500 percent increase from 2015, according to Jamie Susskind, a vice president of the Consumer Technology Association.

But 5G isn’t widely available yet, and it hasn’t achieved anything like its full potential in the U.S. The Swedish technology company Ericsson estimates global 5G coverage at a billion people, or about 15 percent of the world’s population. Even so, the advent of “smart” technology and the constant business demand for more data are propelling 5G forward.

Fifth-generation or 5G technologies represent the next step in the 40-plus-year evolution of mobile communications (Exhibit 1). Each of these five generations introduced new capabilities and services for consumers.

EXHIBIT 1: THE EVOLUTION OF WIRELESS COMMUNICATIONS

Perhaps the most distinguishing feature of 5G is the use of “small cells,” low-powered antennas that communicate wirelessly via radio waves, usually installed on existing public infrastructure such as street signs or utility poles (Exhibit 2), rather than the large towers used to transmit 4G signals. 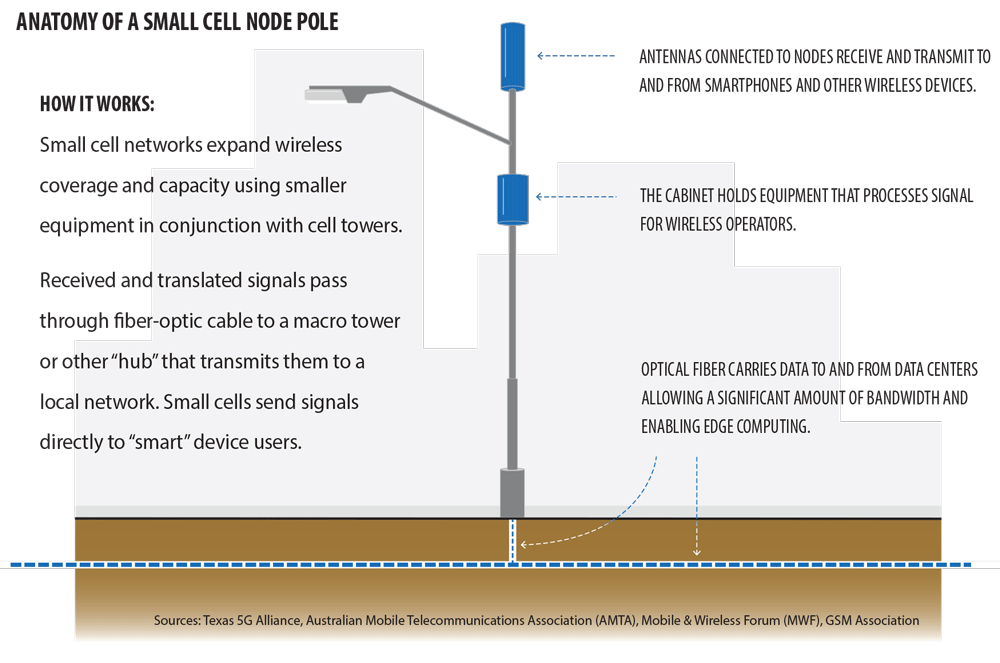 Received and translated signals pass through fiber-optic cable to a macro tower or other "hub" that transmits them to a local network. Small cells send signals directly to "smart" device users.

Small cells allow wireless carriers to offer increased data capacity, faster connectivity speeds and a better wireless experience. The trade-offs are the small cells’ shorter range and weaker signal penetration, meaning they must be configured more densely and installed in much greater numbers. And they must be connected almost exclusively by underground fiber-optic cable — meaning “wireless internet” isn’t, really. In the current, transitional period, 4G cell towers and 5G small cells will continue to exist and work together.

Another factor differentiating 5G is the portion of the radio spectrum used to transmit it. According to analytics firm Open Signal, every nation with 5G other than the U.S. uses the 3.5GHz mid-band spectrum for it; in the U.S., carriers such as T-Mobile and AT&T often use lower bands that offer lower average speeds. That’s one explanation for average U.S. 5G download speeds that were slower than those of 14 other nations as of mid-2020. The U.S. average speed was 1.8 times faster than 4G, while Spain’s, for instance, was seven times faster.

For wireless companies, the expensive, capital-intensive move to 5G hasn’t yet generated the revenue streams needed to fund new applications and services, according to Grant Spellmeyer, a vice president with U.S. Cellular. Such revenue will be essential to making 5G cost-effective.

“The real application is IoT and processing data at the edge,” Collier says. With 5G-enabled “edge computing,” data from embedded sensors can be processed and used on site — a capability that would prove essential for the broader use of autonomous vehicles, for instance.

“When you can analyze and manipulate data where it’s collected, you can deliver insights and value more quickly,” Collier says.

On Dec. 7, 2020, the Federal Communications Commission’s (FCC’s) Rural Digital Opportunity Fund allocated $9.2 billion to 180 providers to deploy high-speed broadband in the next decade to 5.2 million homes and businesses nationwide. In Texas, 22 companies will receive nearly $362.7 million (PDF). Texas’ share will be spent in 220 of its 254 counties; 85 Texas counties will receive at least $1 million each, according to recent media reports.

The FCC also recently completed the latest in a years-long series of spectrum band auctions. On Dec. 8, it auctioned frequencies in the coveted C or mid-band, considered the 5G “sweet spot” due to its optimum ranges of coverage, speed and latency. The tally announced Jan. 15 reflects its value to providers: nearly $81 billion, almost double the previous auction record.

Houston is in the vanguard of small cell permitting in Texas, and not just because it’s the state’s largest city; advocates have lauded its proactive approach to 5G. Other cities, particularly smaller ones, are lagging well behind (Exhibit 3).

*As of November/December 2020.
**Pending either city staff review, carrier revisions or both.
Sources: Interviews with municipal government officials

Due to its reliance on dense networks of small cells, Dawson describes 5G as primarily an urban technology, noting that Texas’ large number of metropolitan areas positions the state to take greater advantage of it. But the state’s expansive rural areas pose a much bigger challenge.

And access doesn’t equal adoption. Harris says that 30 percent of Texans who live in areas where broadband is already accessible don’t subscribe, mainly due to affordability.

Given Texas’ geographic diversity and sheer size, Harris says logistics will play an “outsized” role in getting everyone online. “We need different technological approaches for different parts of the state,” she says.

Derr believes rural residents may be served best by a combination of government funding and private partnerships with local wireless service providers.

This is the kind of issue state broadband offices are designed to address. Texas is one of six states without such an office, but that could change soon (see “Broadband Expansion in Texas” in this issue).

Alok Shah, an executive with Samsung Electronics America, believes 5G may be even more important to industry than the consumer sector, especially as coverage increases and latency decreases.

“5G is not one thing to everybody,” Shah observed during a recent podcast in Broadband Breakfast Live Online's ongoing series, “A No-Nonsense Guide to 5G.” He recounted how 5G-related technology already is benefiting Samsung’s Austin semiconductor factory. According to Shah, ethernet cables used to connect much of the plant’s equipment have been replaced with mobile high-speed connections. 5G also provided workers with real-time chat capability, allowing them to provide timely input for troubleshooting.

Coming Soon … Or Not?

Despite a sense of inevitability, some industry watchers don’t expect the 5G revolution to be complete anytime soon. In the short term, wireless providers may take advantage of the additional frequencies opened up by the federal government — and call it 5G, whether or not small-cell networks are entirely functional.

“In 2021,” Dawson predicts, “5G will continue to be 4G delivered on the new spectrum.” He notes that the entire array of 4G benefits wasn’t available until 2019, a decade after its introduction, so he doesn’t expect a mature 5G in the near term. Moreover, some tech observers caution that the advent of full-blown 5G isn’t a foregone conclusion. They emphasize the need to develop public-private partnerships, seek stakeholders’ mutual interests and forge broad-based working relationships.

“If we don’t collaborate both within and across sectors, we will miss out on the real opportunities,” Collier says. FN

For more on 5G technology, visit the Texas 5G Alliance. See how the West Texas community of Monahans is laying the groundwork for high-speed internet.