Despite being relatively new industries in Texas, craft breweries, distilleries and wineries contribute to the state’s economy. Not only do craft alcohol producers attract a wide customer base to their taprooms and tasting rooms, but their products also line the shelves of grocery and liquor stores and bars and restaurants across the state. Craft breweries, distilleries and wineries employ thousands of Texans, with an average annual employment growth nearly twice that of the rest of the country.

Although no universal definition for what constitutes a craft alcohol manufacturer exists, there are some general, industry-specific guidelines. According to the industry trade group Brewers Association, an American craft brewery must be both small and independent. Small is defined as an annual production of 6 million barrels or fewer, and independent means that less than 25 percent of a brewery’s ownership belongs to someone in the alcoholic-beverage industry who is not a craft brewer. Craft distillers define themselves similarly in that they must produce fewer than 750,000 gallons annually and must be at least 51 percent-owned by a craft distiller to meet the definition of the American Craft Spirit Association. The Texas Wine Marketing Research Association at Texas Tech University categorizes wineries by size and does not typically use the “craft” label for wine. A small winery produces fewer than 5,000 cases of wine yearly, a medium winery between 5,000 and 40,000 cases yearly and a large winery more than 40,000 cases annually.

Each category of alcohol has its own licensing and permit type administered by the Texas Alcoholic Beverage Commission (TABC). A brewer’s license allows for the manufacturing and importing of malt beverages. A winery permit authorizes the holder to manufacture and transport alcoholic beverages. The distiller’s and rectifier’s permit allows the holder to manufacture distilled spirits and to rectify, purify, refine or mix distilled spirits or wine. TABC also issues other permits for the retail sale of craft alcohol.

Craft breweries, distilleries and wineries rely heavily on restaurant and bar sales, and during the pandemic, their products sometimes lacked shelf space at grocery and liquor stores. The industry also depends on revenue collected through taprooms and tasting rooms. Tourism plays an integral part in the craft distilling business and accounts for anywhere from 20 percent to 80 percent of revenue from tasting room sales (PDF).

Wineries across the U.S., which depend heavily on revenue from weddings, wine tours and wine storage, are estimated to have lost between 36 percent and 66 percent of their revenue due to the pandemic. For craft brewers the situation was no better. According to a 2020 survey by the Texas Craft Brewers Guild, 71 percent of Texas craft brewers saw revenue decline, and 63 percent furloughed or laid off employees.

Alcoholic beverage tax collections by the state are a good indicator of how the pandemic affected Texans’ alcohol purchases. Taxes collected by bars and restaurants on alcoholic beverages declined, while taxes paid by distributors increased.

One recent measure in Texas that helped mitigate losses resulting from closed taprooms and tasting rooms was the state’s new alcohol-to-go legislation that went into effect Sept. 1. It allows customers to take home some of the taproom and tasting-room experience.

In 2019, House Bill (HB) 1545 included legislation to allow craft brewers to sell a small amount of beer to go, while Senate Bill 1232 allowed beer and wine retailers to deliver their products directly to the consumer.

The beer-to-go law was further strengthened in 2021, when HB 1024 permitted the pickup and delivery of beer, wine and mixed drinks with food orders. On-premises sales to go, however, are restricted to two 750-ml bottles sold to the same customer within 30 days. 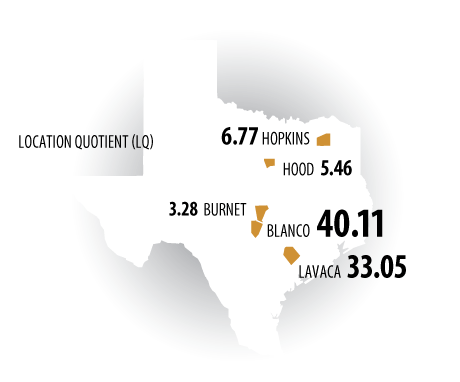 The craft brewing industry in Texas is robust, with more than 300 breweries statewide, says Charles Vallhonrat, executive director of the Texas Craft Brewers Guild. This should not come as a surprise to anyone in Texas. There seems to be no end to the variety of craft breweries to choose from, whether one wants a traditional German brew in the Texas Hill Country or a mug of cold lager after hiking through Big Bend National Park.

Texas ranks among the top 10 states with the greatest number of craft breweries. However, it ranks 47th among states for breweries per capita (i.e., per 100,000 adults ages 21 and older). Although craft breweries operate throughout the state’s counties, Blanco County has more than 40 times the concentration of brewery employment compared with the national average (Exhibit 2). Examining the industry location quotient (LQ) by county illustrates this fact.

According to JobsEQ, a private-sector service that provides and analyzes labor market and economic data, breweries contributed $700 million to the gross state product (GSP) in Texas in 2020 — an increase of about 3 percent annually during the last 10 years. Texas breweries ranked third in the nation for economic impact during the same period, behind California and Pennsylvania.

Craft breweries directly employ more than 4,000 Texans in many occupations at an average annual wage of $58,730, which is higher than the national average of $46,992 (Exhibit 3). During the past decade, the industry has seen an annual employment increase of more than 9 percent.

Craft distilleries in Texas have experienced rapid growth during the past decade. According to a 2020 University of Texas at San Antonio Institute of Economic Development study, the number of distillery establishments in Texas grew from just 10 in 2010 to 162 in 2019, an annual increase of 36.2 percent. Blanco County has nearly 25 times the concentration of distillery employment compared with the national average (Exhibit 4).

Craft distilleries in Texas have a close, symbiotic relationship with other industries, including the agricultural and tourism sectors. Texas distillers purchase crops grown in the state such as barley, juniper berries, oranges and sugar cane.

Texas Distilled Spirits Association President Mike Cameron says, “Texans have a lot of pride in the Lone Star State, and their purchasing habits reflect their love for anything Texan.”

Texas residents are not the only ones who prefer some products produced in the state. Tito’s Handmade Vodka, produced in Austin, is the best-selling distilled spirit in the country. 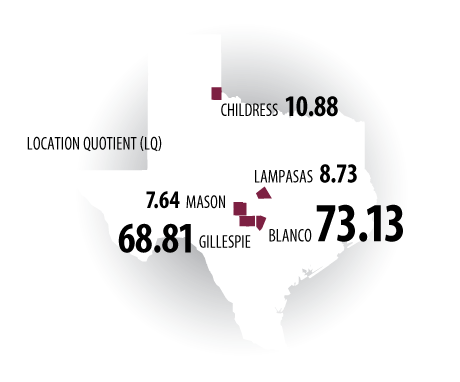 Texas is the fifth-largest wine-producing state (PDF) in the U.S., with its vineyards growing more than 14,000 tons (PDF) of wine-producing grapes in 2019 and adding $200 million in GSP in 2020. This represents a nearly 13 percent annual change during the past decade — more than double the national average.

Wineries can be found across the state, but Blanco County ranks No. 1 again with more than 70 times the national LQ, closely followed by Gillespie County (Exhibit 6).

Texas wineries directly employ almost 2,000 Texans. They make an average wage of $33,518. The average annual employment change has risen 8.7 percent during the past decade, about double the U.S. average of 4.5 percent. As with much locally produced alcohol in the state, most of those employed in Texas wineries occupy production or sales jobs (Exhibit 7).

The Texas Department of Agriculture, along with Texas A&M University (Texas A&M), has made concerted efforts to educate Texas wine grape growers and others involved in the state’s wine industry to ensure the ongoing success of Texas’ wine and wine grape production. The Department of Horticulture Sciences at Texas A&M offers a certificate program in enology and viticulture to train those interested in pursuing careers in the Texas wine industry. This training is especially important given recent weather events such as Winter Storm Uri, whose overall damage to Texas wine grapes remains unknown as plants and wineries continue to recover.

Even with substantial growth in recent years, Texas craft breweries, distilleries and wineries experienced major financial setbacks due to the COVID-19 pandemic and its subsequent economic effects. The decline in alcoholic beverages taxes collected through bars and restaurants and the corresponding increase in taxes collected on alcoholic beverage sales from grocery and liquor stores in 2020 highlight how closed bars and limited restaurant capacity during COVID-19 restrictions affected the craft alcohol industry in Texas.

Despite those difficulties, the craft alcohol industry offerings in the state remain diverse, and the industry continues to grow in Texas. FN

The 87th Texas Legislature passed a variety of new laws during its regular session, including alcohol-to-go sales. Take a deep dive by visiting our 87th Legislature wrap-up from the September 2021 edition of Fiscal Notes.