Winter Storm Uri 2021 The Economic Impact of the Storm

Winter Storm Uri, the severe weather event of February 2021, will long be etched into many Texans’ minds. What might have been a rare opportunity for residents to experience significant snow accumulation turned catastrophic as power blackouts spanned most of the state from Feb. 15-18. A survey conducted by the University of Houston (UH) Hobby School of Public Affairs in mid-March found that more than two out of three, or 69 percent, of Texans lost power at some point during Feb. 14-20, and almost half, or about 49 percent, had disruptions in water service. The storm contributed to at least 210 deaths, and sources cited by the Federal Reserve Bank of Dallas estimated the state’s storm-related financial losses would range from $80 billion to $130 billion.

Texas Energy and the Winter Storm

Like many other things in Texas, energy is big, and much of it also is independent. That independence extends to Texas’ unique place as the only state in the continental United States that is not substantially interconnected with either the Eastern Interconnection or the Western Interconnection (Exhibit 1). The Public Utility Commission of Texas (PUC) regulates the Electric Reliability Council of Texas (ERCOT), which manages the electricity grid. 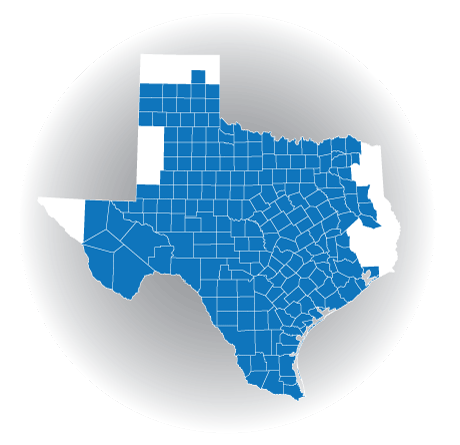 More than 26 million Texas customers, or nearly 90 percent of the state’s population, depend on ERCOT for electricity services. ERCOT does not have its own grid infrastructure but instead relies on power generation companies, electricity providers/utilities (i.e., investor-owned and municipally owned providers, electric cooperatives and the river authorities), and transmission and distribution utilities that participate in the wholesale energy market.

Texas energy is generated from a variety of sources (PDF) with the majority supplied by natural gas, wind and coal — 51 percent, 24.8 percent and 13.4 percent, respectively (Exhibit 2). More than 1,800 active market participants generate, move, buy, sell or use wholesale electricity, and ERCOT works with them to provide individual consumers with electricity. To ensure that the process runs smoothly, ERCOT produces seasonal planning reports to prepare for changes in weather and demand, as well as for potential emergencies based on historical data and planned outages for maintenance as well as other similar purposes.

Winter Storm Uri far exceeded the parameters of ERCOT’s seasonal planning. According to the National Weather Service, freezing rain and drizzle coated North and Central Texas as the storm began rolling in on Feb. 11, 2021, causing up to one-half inch of ice accumulation in some locations. Snow later followed on Feb. 14-17, with 5 inches recorded at Dallas-Fort Worth (DFW) International Airport and 4.6 inches recorded at Waco Regional Airport. DFW recorded 139 consecutive hours of at or below freezing temperatures, and the Waco airport recorded 205 consecutive hours.

Gov. Greg Abbott issued a state of emergency declaration (PDF) on Feb. 12 due to the severity of the storm. On Feb. 13, some electricity generators began experiencing outages, and on Feb. 14, ERCOT issued a public plea for customers to reduce energy usage after power generation could not be increased to meet demand. As the grid continued to struggle to meet demand, controlled blackouts occurred, and on Feb. 15, ERCOT issued a declaration of emergency. According to a University of Texas at Austin (UT-Austin) Energy Report (PDF), the grid did not normalize until Feb. 19 and narrowly missed a catastrophic failure that potentially could have caused a total blackout throughout the state.

A Perfect Storm of Causation

The UT-Austin report found that Uri, although not the most severe Texas winter storm on record, caused the most loss of electricity. The report also stated that rolling blackouts were intended to take stress off the power grid but turned into outages that — in some parts of the state — lasted several days. According to the report, multiple factors caused those extended blackouts, including that ERCOT underestimated peak demand by nearly 14 percent and weather forecasts misjudged the severity and timing of the storm.

While planned generator outages fell within the appropriate range listed in ERCOT’s seasonal plan, the report found that outages were still high in number. Additionally, energy power generators failed on all fronts, including those powered by natural gas, wind and coal.

Exhibit 3: PERCENTAGE OF TEXANS WITHOUT ELECTRICITY OR RUNNING WATER, FEB. 14-20

As mentioned, 210 people perished because of Winter Storm Uri. According to the Texas Department of State Health Services (DSHS), most fatalities can be attributed to hypothermia, vehicle crashes, carbon monoxide poisoning and chronic medical conditions complicated by the storm. (DSHS continues to monitor and update this figure as new information becomes available.)

In addition to electricity and other utility disruptions, Texas residents experienced a host of negative effects from the winter storm (Exhibit 4). The UH survey found that three-quarters of respondents had difficulty procuring food and groceries. Meanwhile, 31 percent had water damage to their residences, and of those, only 18 percent believed insurance would likely cover the damage.

A recent study by the Texas Real Estate Center at Texas A&M University reported that, in 2019, 11 percent of homeowners in metropolitan areas had no homeowners insurance, compared with 26.6 percent of uninsured homeowners outside those areas. The center also found that low-income Texans were more likely to be uninsured, leaving them to pay for the entirety of their home repairs.

Supply chains, which already were in turmoil because of the COVID-19 pandemic, suffered more disruption due to Winter Storm Uri. This setback included Texas chemical plants, which make up nearly 75 percent of U.S. chemical production and contribute to the manufacture of ingredients necessary for disinfectants, plastic bottles, fertilizer, pesticides and packaging. The freezing temperatures and blackouts damaged equipment in those plants, further slowing supply lines.

Chemical, plastic and rubber exports — accounting for almost 17 percent of Texas exports during the three months prior to the winter storm — saw their inflation-adjusted value decrease by more than 20 percent in February 2021. Additionally, supply chains stumbled because goods could not be transported by truck or rail in such dire weather conditions.

According to an estimate from the Texas A&M AgriLife Extension Service (AgriLife Extension) in March, Texas agriculture experienced losses of more than $608 million from Winter Storm Uri. AgriLife Extension found that ranchers not only lost cattle, sheep, goats and poultry to the extreme cold, but much of their grazing grain was lost as well. The latter left ranchers with few options except to buy additional feed.

Some dairy operators were forced to dump milk due to transportation difficulties during the storm. And because the winter storm hit during birthing season, it led to the loss of many newborn calves and lambs. Overall, AgriLife Extension tallied economic losses to ranchers at nearly $228 million.

The same group estimated losses for citrus farmers of at least $230 million. Some Rio Grande Valley producers lost more than 60 percent of their crops. Citrus crops that did not survive the storm may take years to replace and begin producing fruit, causing an even greater economic impact. Vegetable crops also suffered, with devastating losses totaling nearly $150 million. The most significant impact to vegetable farmers was to onions, leafy greens and watermelons. Agricultural production disruption and the related increased cost of livestock feed contributed to some higher costs at grocery stores as well; with yields down, prices went up.

Due to the complexity of the Texas grid system and variety of consumer options, the exact impact on Texas energy customers is still difficult to discern.

Although Winter Storm Uri’s devastation continues to be tallied, early estimates of the storm’s economic toll, as mentioned, range from $80 billion to $130 billion — the result of power loss, physical infrastructure damage and forgone economic opportunities. Due to the complexity of the Texas grid system and variety of consumer options, the exact impact on Texas energy customers is still difficult to discern. What we do know is that all major sources of energy in the state experienced failures, along with the power grid managed by ERCOT.

UT-Austin professor of energy resources, Dr. Joshua Rhodes, who also works with the educational Webber Energy Group, says blackouts were the “last line of defense.” Had the grid continued to decline causing a catastrophic failure, “Texas manufacturing would likely have come to a halt,” he says, “and its ripple effects would’ve affected the state’s GDP in a major way.”

Thankfully, that scenario did not occur, but in February 2021, Winter Storm Uri did help to illustrate the interconnectedness of the Texas economy and provide an opportunity to better mitigate the effects of future storms. FN

Learn about actions our state agency took in response to the winter storm by visiting “Winter Storms, February 2021” on our Disaster Relief page.