A Cryptocurrency Primer Understanding Crypto and Its Rise

In 2009, Satoshi Nakamoto wrote a software program that created the Bitcoin network (with an uppercase B) and the digital cryptocurrency, bitcoin (with a lowercase b). The identity of Nakamoto, a pseudonym for one or more people who created Bitcoin, remains a mystery, but the Bitcoin network’s impact launched an industry, and its influence gave rise to the culture of cryptocurrency.

“There is a lot of lingo in this world,” says Anca Ion, chief investment officer for the Texas Treasury Safekeeping Trust Company. “The purpose of Bitcoin, initially at least, was to eliminate many of the problems that involve transacting with or through intermediaries — high costs and long processing times.”

The push by creators of cryptocurrency to rely less on banks reflected current events at the time. During the birth of Bitcoin in 2009, there were an estimated 119 million unbanked households in the U.S. alone, according to the Federal Deposit Insurance Corporation. The country also was experiencing the Great Recession and the failure of almost 500 banks (PDF).

It took more than a year after Bitcoin’s launch before someone used the first bitcoin for a purchase — two pizzas on May 22, 2010. A programmer, Laszlo Hanyecz, offered any willing taker 10,000 bitcoins, or about $41 in 2010 dollars, to purchase and deliver the pizzas on his behalf. While the transaction was noteworthy, the change in bitcoin value since that day has sealed its fame. On May 22, 2022, the amount paid for those two pizzas was valued at around $300 million (Exhibit 1). 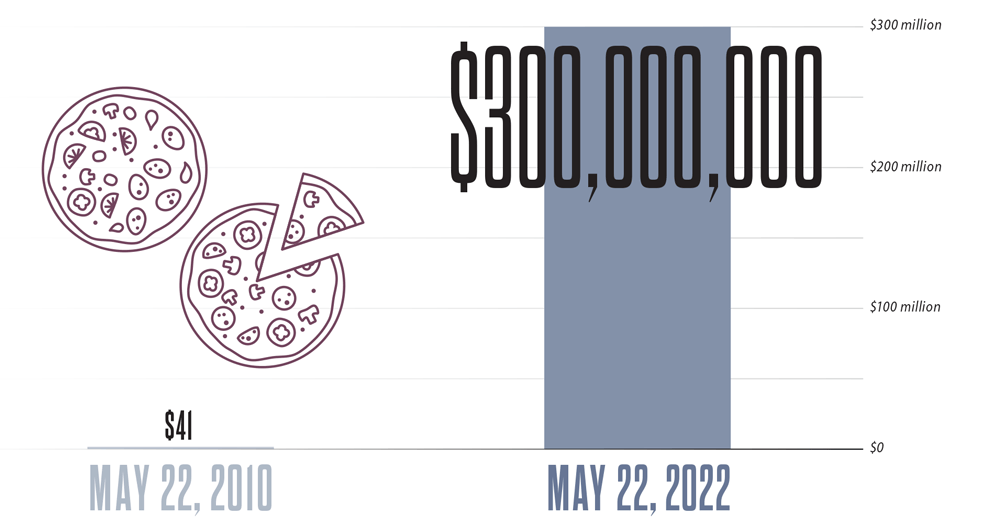 Cryptocurrency has gained a stronger foothold in retail since its early days, including in such major chains as Home Depot and Starbucks and in local businesses. Transactions typically occur through a third-party app.

In 2021, H-E-B started a pilot program with Coin Cloud, a digital currency provider, to provide kiosks, or cryptocurrency ATMs, in 29 Houston-area stores.

According to a 2021 Pew Research Center survey, 86 percent of Americans have heard at least a little about cryptocurrencies, and 16 percent have invested in, traded or used a cryptocurrency. By comparison, when asked about bitcoin specifically in 2015, 48 percent of respondents reported hearing about it, and 1 percent had experience using it or investing in it.

Though more Americans are familiar with cryptocurrency, skepticism also is growing. Critics have called cryptocurrency a scam, a pyramid scheme and much more. A June 2022 survey by The Ascent, a Motley Fool service, found that 24 percent of respondents did not own cryptocurrency because they considered it a bad investment, up from 9 percent in 2021.

There currently are around 10,000 types of cryptocurrencies, and some estimates place that number closer to 19,000. Though all are based on the original code for Bitcoin — cryptocurrency is open source software, allowing any developer to access the code — the various cryptocurrencies are not exactly the same. Dogecoin (DOGE) originated as a joke based on a popular meme; Tether (USDT) is a stablecoin whose tokens are supposedly backed 1-to-1 by U.S. dollars held in reserve; Flycoin, a financial technology startup, rewards frequent flyers with crypto tokens; and Ethereum is a blockchain platform, one of the most popular, that settles transactions by allowing users to send and receive the cryptocurrency called ether.

“If you look at bitcoin in the early days, the price did not fluctuate as crazily as it does now because it was just a form of payment. Bitcoin was never created as something people buy and sell. That’s when the price of crypto kind of went crazy.”
– Simon Mak

Bitcoin
Frequently considered the first peer-to-peer electronic payment system. The Bitcoin network uses a cryptocurrency called bitcoin.
Central Bank Digital Currencies (CBDC)
A virtual money backed by a government. Many countries, including the U.S., have initiatives that are researching or developing their own CBDC.
Cryptography
The practice of writing and deciphering coded data. Cryptocurrency gets its name from the term.
Decentralization
A system without a central point of control and one in which users maintain custody of their own assets. Bitcoin is based on this system.
Digital Currency
Money that exists in digital form and is sent electronically over the internet. This term may refer to money that exists only in digital form such as cryptocurrency but also is frequently applied to traditional monies exchanged digitally (e.g., an online payment or government-backed virtual currency).
Private Key
A unique code that proves ownership of a wallet.
Wallet or Digital Wallet
Contains a private key allowing a user to access cryptocurrency located on a blockchain.

Some of Bitcoin’s features, however, are common attributes of all cryptocurrencies:

For all the technical details, Dr. Simon Mak, the Linda A. and Kenneth R. Morris endowed director of the Caruth Institute for Entrepreneurship at Southern Methodist University, says that there’s nothing fancy about cryptocurrency. It’s primarily a new way of looking at currency. He offers an analogy to help understand the concept:

Crypto as an Investment

Bitcoin’s source code designates a limited supply of 21 million digital coins. As of publication, more than 19 million coins have been mined, but experts predict the last bitcoin won’t be mined until around 2140. The source code tells the mining process to slow down over time. In theory, these features increase the coin’s value — depending on demand.

However, Bitcoin, and the wider cryptocurrency market (Exhibit 2), is viewed as highly volatile. The reason for this, says Mak, goes back to the original intent behind Bitcoin.

“If you look at bitcoin in the early days, the price did not fluctuate as crazily as it does now because it was just a form of payment. Bitcoin was never created as something people buy and sell. That’s when the price of crypto kind of went crazy,” says Mak.

A Satoshi for Your Thoughts

Like dollars and cents, cryptocurrencies have smaller denominations, allowing people to purchase or send fractions of a cryptocurrency. For example, a satoshi is the smallest denomination of bitcoin, equaling just 0.00000001 of one bitcoin.

To date, bitcoin’s all-time highest value was nearly $69,000 in November 2021. In the first half of 2022, its value fell more than 50 percent, according to CoinDesk, following the same trajectory as other cryptocurrencies. By the middle of June, it dipped below $20,000 — a price not seen since December 2020. The recent volatility partly is due to stablecoins, a type of cryptocurrency.

“Stablecoins were one strategy to try to minimize the volatility of the cryptocurrency. And the original strategy was to tie one stablecoin to one U.S. dollar,” says Mak. “The problem has turned out [to be] that in practice, one stablecoin really wasn’t backed by one dollar; it was backed for like 50 cents.”

Part of the problem, Ion says, is that stablecoins haven’t been regulated, and it’s often unclear how much is being pegged. “And as we’ve seen, stablecoins are not as stable as initially thought,” she says.

A 2020 report by Chainalysis, a U.S. blockchain analysis firm, stated that about 20 percent of mined bitcoin is considered lost. And because it’s decentralized, once lost, it’s gone forever. High-profile stories of lost fortunes have included a hard drive tossed into a landfill or a forgotten password.

“If you hold a digital asset, it is accessed via a private key. Ensuring the security of this private key password is very important to keep the funds safe,” says Ion. “If the private key to a digital wallet was to become lost or compromised, the funds would be lost, or [a] third party can gain access to them.”

“The blockchain infrastructure, I think, is probably something that gets the attention of the investment world the most, beyond the cryptocurrency.”
– Anca Ion

Blockchain — the technology behind all cryptocurrency — is considered very secure because the platform uses cryptographic algorithms and stores information on multiple computers, removing the risk of an attack on a single device.

“The blockchain infrastructure, I think, is probably something that gets the attention of the investment world the most, beyond the cryptocurrency,” says Ion.

Developers see real-world applications for blockchain networks outside of cryptocurrency, in industries that could benefit from optimized information sharing and tracking, such as health care and real estate as well as in industry supply chains. That’s attracting a lot of money and interest from venture capitalists, but unlike cryptocurrency, people cannot invest in blockchains as an asset.

Supply chain applications of blockchain extend to health care, where it can be important to track a pharmaceutical. Additionally, some experts see blockchain as a secure way to store patient records in a place where every doctor — primary care physicians and specialists, out-of-network and in-network — can see a patient’s full medical history. Still others are looking at how blockchain might streamline contract management.

“Everyone is trying to become the standard blockchain for a specific industry. There’s a big battle right now. That’s why so much money is being invested. If you can be the dominant blockchain in health care, for example, the return on investment is basically unlimited,” says Mak. “They all want to be the Google search engine for blockchain.”

Cryptocurrency has been called a revolution. At less than 15 years old, the original Bitcoin is still young, and it’s hard for anyone to determine its long-term impact. Some imagine this is leading to a world without cash, where all payments are digital. The blockchain infrastructure, meanwhile, has entrepreneurs and venture capitalists exploring business uses for this emerging technology.

“We try to understand how the future is going to look. Everything is still in terms of testing and being tested,” says Ion. FN

To learn more about the Texas Treasury Safekeeping Trust Company mentioned in this article, visit TTSTC.org.