The Good for Texas Tour: Water Edition Comptroller Highlights Water Use and Innovation Across Texas

Water use, availability and planning are vital in Texas, given the state’s size and expansive needs. As part of his ongoing Good for Texas Tour series of statewide travels, Comptroller Glenn Hegar visited water projects across the state that are working hard to meet Texans’ water needs, now and in the future.

“People moved to this state to provide for themselves and for future generations,” says Hegar. “But the fact is, we can only provide economic opportunities if we meet basic, core, essential needs — and one of those is water.”

The Texas Water Development Board (TWDB) is the state’s lead water planning and infrastructure financing agency. Every five years, the TWDB releases an updated State Water Plan (SWP), which serves as a guide to Texas water policy and regional water supplies and needs for 50 years into the future.

According to board member George Peyton, “It’s imperative upon us, the state and our agency, to plan for all these people and businesses moving here, ensuring water availability so that economic success can be available for everyone.” TWDB Chair Brooke Paup puts it even more bluntly: “If a community doesn’t have a sustainable water source, they cannot grow.”

Roland Ruiz, general manager of the EAA, says, “More than 2 million people are dependent on this aquifer as their primary water resource. So our job is really to take care of that resource … It’s there for not only the current residents of this part of Texas, but future generations.”

The EAA estimates that from 1997 to 2014, its regulatory oversight preserved 2.6 million acre-feet of water. (An acre-foot is the volume of water needed to cover one acre to a depth of one foot and is equal to 325,851 gallons of water.)

Texas is home to nine major aquifers and 22 minor aquifers, all of which provide groundwater (Exhibit 2). Aquifers are underground geologic formations made up of porous rock or sediment that hold groundwater and are replenished through rainfall, surrounding streams and lakes, or inflow from surrounding aquifers. 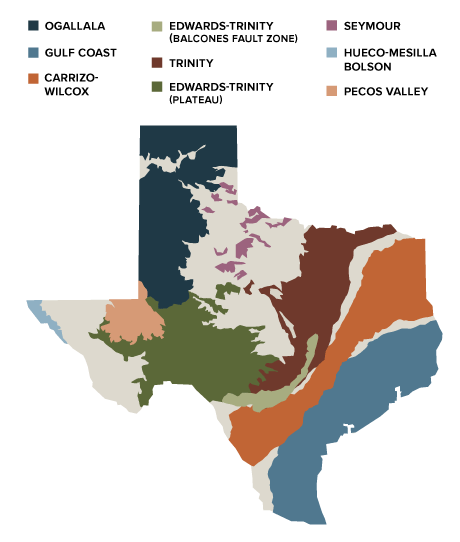 An innovative way to preserve water in Texas aquifers is through aquifer storage and recovery (ASR). ASR is the process of capturing excess water and injecting it deep into aquifers to be stored for use during emergencies for months, or even years, at a time.

During the Good for Texas Tour, Hegar visited the San Antonio Water System’s (SAWS) H2Oaks Center, which has an estimated 200,000 acre-feet of water stored in the largest ASR system in the state. The center produces water from three different sources out of one location to deliver drinking water to its 2 million customers. Hegar calls it “one of the crucial facilities that will help the state implement successful water management strategies to meet the growing demand for this precious natural resource.”

Desalination is the process of removing excess salt and other minerals from various types of water such as groundwater, surface water, reclaimed water and seawater. The purpose of desalination is to create fresh water from water that otherwise may be unusable. Desalination is used in parts of Texas where water is too salty or highly mineralized. Thirteen percent of all desalination plants in the country are in Texas.

During Hegar’s visit to H2Oaks, he also toured the state’s second-largest groundwater desalination center. Texas currently has 53 municipal desalination facilities with a combined production capacity of 157 million gallons per day — more than 176,000 acre-feet per year. More than two-thirds (36 facilities) of all desalination plants in Texas treat brackish groundwater, which is groundwater that contains dissolved solids such as salt between 1,000 and 10,000 parts per million. Of the remaining plants, 16 treat brackish surface water, and one treats reuse water.

In 2022, TWDB reported that Texas has more than 3.8 billion acre-feet of brackish groundwater available based on completed studies in 13 of the major and minor aquifers, a huge amount of source water suitable for desalination.

Cloud seeding — also called precipitation enhancement — is a weather enhancement process that stimulates clouds to produce more rain. In this process, aircrafts spray clouds with small ice-like particles, such as silver iodide. These particles allow moisture in clouds to condense into water droplets that fall as rain when heavy enough.

Hegar visited the Panhandle Groundwater Conservation District (PGCD), home to one of five cloud seeding programs in Texas. To help supplement the Texas water supply, some areas of the state are using periodic cloud seeding attempts to increase rainfall. The PGCD conducts cloud seeding operations to augment groundwater recharge over the Ogallala Aquifer. This is a target area of nearly 4.1 million acres in the eastern sector of the Texas Panhandle, which allows access to cloud systems moving out of Oklahoma.

Cloud seeding is included in the TWDB’s 2022 SWP and is projected to provide about 5,000 acre-feet of water per year by 2070. According to George Bomar, volunteer chairman with the Texas Weather Modification Association, “Water is the greatest challenge that Texas is going to face in coming decades. [It] is our most precious resource, and we’re going to be challenged to have enough of it in the coming decades in order to meet the needs of a growing population.”

Surface water is water that is located above ground. Surface water accounted for about 42 percent of Texas’ total water use in 2019, with about half of this being used for municipal purposes. Nearly 30 percent of surface water is used for irrigation and 15 percent for manufacturing (Exhibit 3).

To meet future water demands, the regional water planning groups recommend surface water projects that will provide the state with an additional 2.8 million acre-feet of water per year by 2070. One of these projects is Bois d’Arc Lake in Northeast Texas, the first major Texas reservoir to be built in 30 years. The North Texas Municipal Water District is spearheading the project with financial assistance from the TWDB.

Once completed, Bois d’Arc Lake could provide up to 82 million gallons of water per day to the North Texas region, highlighting the coordination between state, local and city governments.

Canals enhance the distribution of water throughout Texas, supplying water for crop irrigation, industry and municipal uses as well as providing a means of transportation for ships and cargo. The largest transportation canal in Texas is in the Gulf Intracoastal Waterway (GIWW). The Texas portion of GIWW handled more than 70 percent of the canal’s total traffic in 2018 — about 77.7 million tons. Overall, when taking into account indirect and induced economic impact, the canal backs nearly 65,000 jobs and $8.7 billion in labor income and contributes $31.7 billion to the state’s economic output, according to the Texas Department of Transportation.

Hegar visited the Lower Neches Valley Authority, which manages fresh water in the Neches River Basin and the Neches-Trinity Coastal Basin in East Texas. Watersheds of the Neches River and its tributaries cover 10,300 square miles and produce 5.6 million acre-feet of water annually. The canal system also enhances the area’s biodiversity, boasting some of the greatest mussel diversity in Texas.

Water is a delicate resource — too little can lead to drought and too much can lead to flooding. According to the Federal Emergency Management Agency, Texas ranked sixth in the nation for flood insurance payouts in 2022. In Central and West Texas, as well as along the Gulf Coast, floods can be a common danger. On the flip side, flooding sometimes can be beneficial to the environment. It can contribute to groundwater recharge, maintain floodplains as a habitat for plants and animals and preserve floodplains, thus reducing the severity of larger flooding events. This is possible through flood management and flood mitigation.

Water reuse is the use of wastewater that has been treated to remove contaminants, solids and impurities so that the water can be used for such things as irrigation, groundwater replenishment, industrial processes and more. In 2020, reuse sources contributed 620,000 acre-feet to Texas’ water supply. Although water reuse makes up a small portion of Texas’ water supply, its share is expected to grow by 15.2 percent between 2020 and 2070.

The following are four examples of water reuse facilities in Texas:

Through enhanced conservation, sound management strategies and the use of innovative technology, Texans are confronting water challenges head-on.

“The future of water in Texas is the future of the Texas economy,” Hegar says. “Whether in times of drought or flood, responsible water management ensures Texans see water as a resource — not a crisis. Texans around the state are employing innovative strategies to turn our water challenges into opportunities. And that’s good for Texas.” FN

Video Highlights from the Good for Texas Tour: Water Edition