U.S. military installations in Texas play a vital role in strategic national defense and provide significant benefits to the state economy. The bases support local businesses and create jobs in a range of industries. The U.S. Department of Defense (DoD) maintains 14 bases throughout Texas, covering more than 1.4 million acres.

Every two years, at the request of the Texas Military Preparedness Commission, the Texas Comptroller’s office conducts a study that analyzes the economic impact of U.S. military installations on the state’s economy.

Notes: The impact from military installations may be greater than what is being measured. “Output” refers to total economic activity, or the total value of all goods and services (both final and intermediate) produced in Texas. “Gross domestic product” refers to the total value of all final goods and services produced in Texas. “Disposable personal income” refers to post-income-tax income. Indirect jobs include jobs in industries that serve the installation and those that support the household/consumer needs of the installation’s employees.
Sources: Texas Comptroller of Public Accounts; Regional Economic Models, Inc. (REMI)

Texas’ military bases aren’t just barracks, mess halls and runways. In some cases, a base can function more like a city, providing machine shops, wellness centers, restaurants, day care centers and more. It can employ civilians and military contractors as well as service members.

“While each installation plays a pivotal strategic role in our nation’s defense,” Texas Comptroller Glenn Hegar says, “it also supplies an enormous economic benefit to our state by employing thousands of Texans and spending millions on construction and supplies from local businesses.”

Goodfellow Air Force Base (AFB) sits on 1,235 acres in San Angelo. In 2021, the base reported the equivalent of 9,690 full-time employees, including 5,000 service members from every military branch (Army, Air Force, Navy, Marines, Coast Guard and even Space Force). More than 1,000 civilians are employed in administrative services, base operations, repair services and custodial, construction and education jobs. The base’s employment and spending activity in 2021 generated $1.5 billion in personal income and $4.7 billion in economic activity within Texas.

Goodfellow AFB trains imagery analysts, linguists, cryptologists and data analysts. It also is home to the DoD’s only firefighting academy, where students from all military service branches and international partners train in fire protection.

San Angelo was honored with the 2021 Air Education and Training Command Community Support Award (known as the Altus Trophy) for the community that provides the finest support to its local military installation.

In addition, the city of San Angelo has two intergovernmental support agreements with Goodfellow AFB. One provides access to housing for 100 unaccompanied base personnel at Angelo State University (ASU). The other, called the Faculty Development Program (Doolittle Scholars), provides faculty training at ASU for 20 instructors from Goodfellow AFB. Separately, a San Angelo/Goodfellow AFB collaboration secured more than $8.8 million from the Texas Defense Economic Adjustment Assistance Grant Program to increase the number of highly classified classrooms and for a new dining facility.

The Army Futures Command (AFC), headquartered in Austin, had 833 full-time, active-duty and civilian personnel in 2021. Total spending related to the base’s employment contributed to nearly 1,400 additional indirect jobs and generated more than $371 million in economic activity and more than $156 million in disposable personal income.

Unlike most bases that occupy one large facility in a city or county, Joint Base San Antonio’s (JBSA) 45,077 acres are located throughout the city of San Antonio and surrounding areas (Exhibit 2). This includes 40 million square feet of buildings and other facilities. 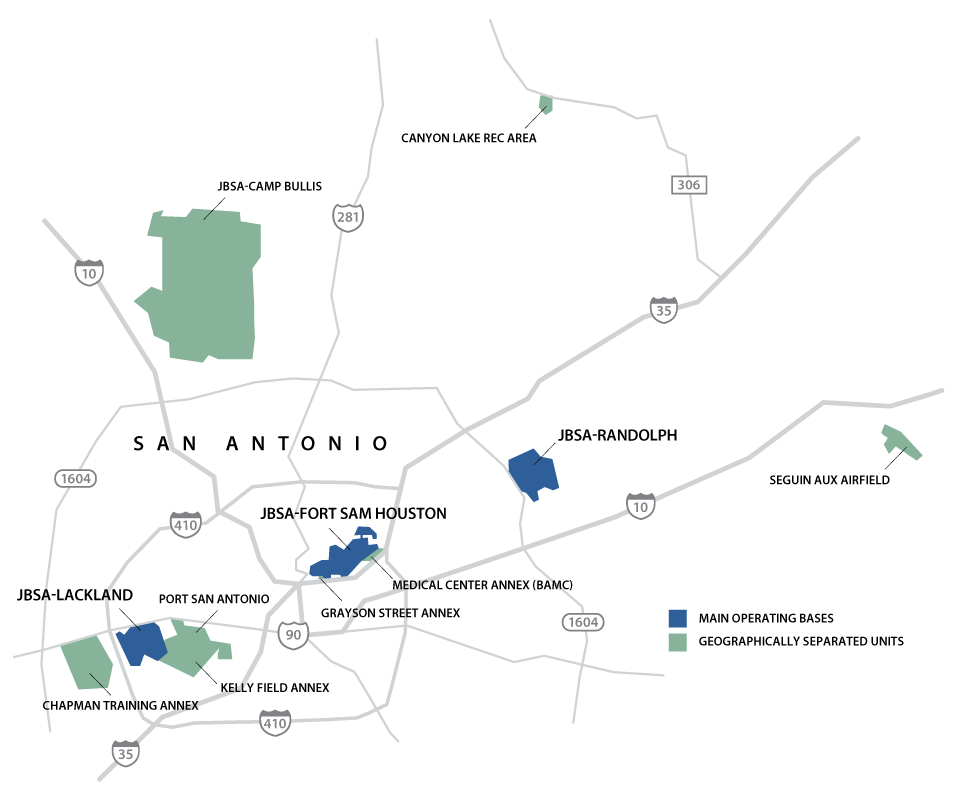 “As Texas’ largest DoD installation and a key economic contributor, Joint Base San Antonio is committed to our partnerships with our local communities,” says Brig. Gen. Russell D. Driggers, commander, JBSA and 502nd Air Base Wing. “Their long-standing support has been integral to our success, and we look forward to continued partnerships as we advance this proven formula together.”

In 2021, JBSA’s direct full-time employment included active-duty personnel and civilians totaling 82,639. This employment and base-related spending supported an estimated 211,000 statewide jobs, generated more than $14 billion in disposable personal income and impacted the Texas economy to the tune of more than $39 billion.

“From 2001 when Robert Gray Army Airfield entered into a joint use agreement with Killeen-Fort Hood Regional Airport, the relationship has been of great benefit to all stakeholders.”
– Tracy Crawford, director of aviation operations at Fort Hood

Fort Hood is centered around the city of Killeen and covers 218,823 acres in southwestern Bell and southeastern Coryell counties. In 2021, Fort Hood reported full-time employment of 55,374, of which more than 37,000 were active-duty military personnel. These military service members accounted for roughly 49,000 dependents, including about 29,000 children attending local schools.

Killeen initially invested about $85 million in KFHRA to improve airfield infrastructure, and the Army provided air traffic control and fire and rescue services. KFHRA and Bell County worked together to secure funding to construct a $4.7 million airport visual surveillance system, according to the Fort Hood Sentinel. With more than half of KFHRA’s traffic driven by Fort Hood, it was one of the first regional airports in the nation to exceed 2019 passenger volumes.

In 2021, Fort Hood’s employment and base-related spending contributed to 160,933 direct and indirect jobs statewide and generated more than $11.2 billion in disposable personal income and more than $28.8 billion in economic activity.

The Importance of Military Bases in Texas

Many bases work with local governments to coordinate tourist events, regional educational opportunities and logistics. These efforts are apparent in the partnerships and programs at the AFC, the Dyess AFB Memorial Museum and Linear Air Park, the “Wings Over South Texas” air shows in Kingsville and the partnership at the regional airport in Killeen/Fort Hood.

“It is amazing to see the tremendous economic impact these military installations have on Texas,” says Hegar. “While the direct economic contributions of these bases are important, the men and women who work and are stationed at them form the backbone of communities, supporting countless businesses and spurring jobs throughout the state.” FN