Since the late 1990s, when pharmaceutical companies asserted that opioids were not addictive, the use of prescription opioids has grown substantially; by 2017, more than 191 million prescriptions were written in the U.S. A 2019 national survey on drug use and health by the Centers for Disease Control and Prevention (CDC) found that more than 10 million patients misused prescription opioids that year, leading the CDC and states such as Texas to declare an opioid epidemic and change prescription standards. Texas, along with 13 other states, brought a lawsuit against several pharmaceutical companies for their role in causing the opioid crisis. The states recouped billions of dollars to address the health results of the opioid epidemic faced by their citizens.

In July 2021, a $26 billion settlement was reached between a bipartisan group of attorneys general and opioid manufacturer Johnson & Johnson (Janssen), and three pharmaceutical distributors, AmerisourceBergen, Cardinal Health and McKesson.

Texas is estimated to receive about $1.6 billion over the course of 18 years from six different companies through the settlement agreements.

Given the potential amounts of settlement proceeds and the needs of those in crisis, in 2021 the 87th Legislature created the Texas Opioid Abatement Fund Council, administratively supported by the Texas Comptroller of Public Accounts. The council is charged with ensuring that the money recovered from the multi-state settlements and court orders is divided fairly and used to remediate the opioid crisis faced by the state.

Of the estimated $1.6 billion in settlement proceeds allocated to Texas, $244.7 million is directed to the Opioid Abatement Account — a General Revenue-dedicated account that will fund state agency programs subject to legislative appropriation. The remaining $1.3 billion in settlement funds is directed to the Opioid Abatement Trust Fund, administered by the Texas Treasury Safekeeping Trust Company. The council manages the distribution of $1.1 billion in the abatement trust fund, with allocations determined by the settlement agreement and by state statute.

The council’s distribution directives include $166.7 million to hospital districts and $11.1 million for Comptroller administration costs. The remainder, $933.5 million, is distributed by the council, with 75 percent required to meet certain annual allocations among the 20 Texas Health and Human Services regional health care partnerships ($700.1 million) and 25 percent to targeted programs ($233.4 million).

Other abatement trust fund proceeds outside of the council’s management include $239.2 million to municipalities and counties and a one-time allocation of $5 million to the Texas Access to Justice Foundation (Exhibit 1). On Nov. 15, 2022, the Trust Company transferred this payment to the foundation. 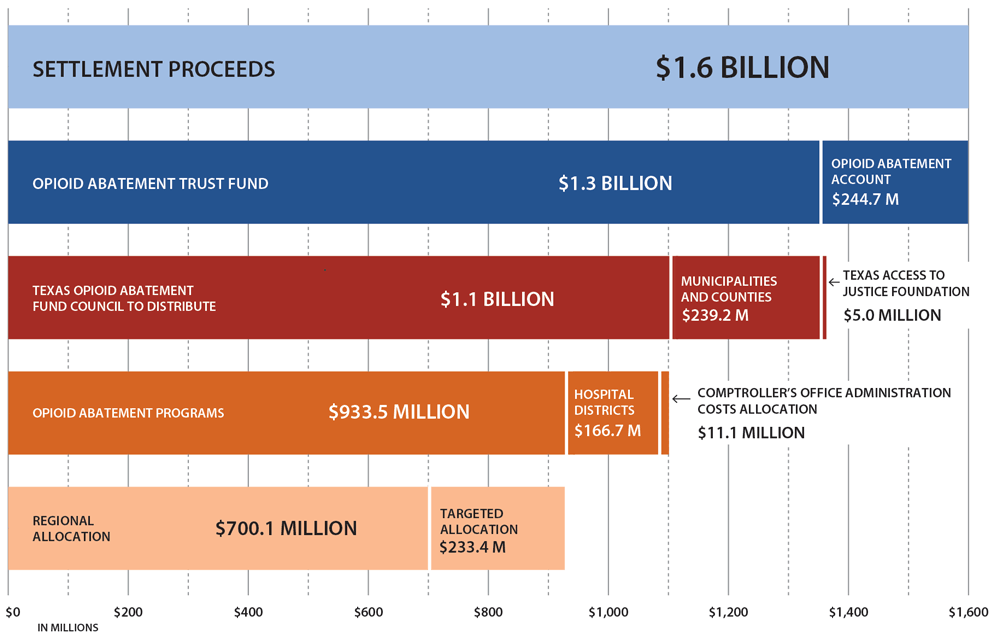 After the required portions are distributed, the Texas Opioid Abatement Fund Council may allocate any remaining funds to existing programs using the evidence-based opioid abatement strategy it develops as a decision-making guideline.

As of July 22, 2022, the state had received $130.6 million in settlement funds (Exhibit 2). A legislative appropriation is needed to move funds from the McKinsey settlement to accounts outside of General Revenue, as the agreement was finalized separately.

Exhibit 2: DISTRIBUTION OF OPIOID SETTLEMENT PROCEEDS (AS OF JULY 22, 2022)

Source: Texas Comptroller of Public Accounts
Note: Proceeds are net of Texas Office of the Attorney General (OAG) fees. The OAG received legal fees for its work representing the state.

Associate Deputy Comptroller Korry Castillo spoke about the potential breadth of the council’s response to the opioid epidemic at a recent event.

“These initiatives could reflect the full spectrum of opioid response projects — from preventing opioids entering our communities to treating Texans with opioid use disorder and supporting them in long-term recovery,” Castillo said. “These projects could also address the more far-reaching impacts of the opioid crisis by helping keep families together and preventing children from entering the foster care system. The council will consider all aspects of the opioid crisis, including its impact on our law enforcement, the criminal justice system, individual and public health, and Texas families and communities, before establishing its priorities and granting funds.”

During the presentation by Col. Steven McCraw, DPS director, the council raised questions about the possibility of redefining the punishment for illegal opioid possession. The current law states that a person possessing any opioid listed in the penalty groups can be charged anywhere from a Class B misdemeanor to a first degree felony. The charge depends on the amount of the opioid, the penalty group it is classified under and whether there is intent to distribute the drugs. Any change to these laws, even if just to simplify the categorization of the opioids, would require state legislative action. McCraw also discussed drug smuggling along the border between Texas and Mexico.

Jason Clark, chief of staff for TDCJ, outlined the agency’s programs to address substance abuse among inmates and to prevent illicit drugs from entering correctional facilities.

“We are not only an agency designed to hold individuals accountable but to also provide opportunities where they can become better,” Clark said. “One component of public safety is helping justice-involved individuals battle their addiction to dangerous drugs like fentanyl. The agency provides robust programming through probation departments, within correctional facilities and in communities after individuals are released from custody.”

HHSC testified about programs currently provided by the agency supporting substance abuse services to communities, including the Texas Targeted Opioid Response Program. This program aims to increase access to medications associated with opioid use disorder and to decrease opioid overdose-related deaths through use of evidence-based prevention, integration, treatment and recovery support services.

DSHS provided the council with educational materials and highlighted how the agency uses the Texas Health Data website to communicate with the public. The site provides current data on overdose deaths, opioid-related emergency visits and the Texas Prescription Monitoring Program.

TEA discussed its approach to the crisis, which involves outreach to school officials and districts to educate them on the dangers of fentanyl so they can incorporate that information into existing anti-drug curricula for students and their families.

Alejandro Delgado, deputy commissioner for TEA, underlined the communications potential of his agency.

“TEA has the potential to reach more than 1,200 school systems, nearly 9,000 campuses, 750,000 school personnel, and more than 5.4 million students and their families with information and resource dissemination,” Delgado said.

DFPS provided the council with information about addressing the crisis through expanded drug testing panels, caseworkers assistance and referrals to community-based centers. The agency contracts with local nonprofits, local governments and schools to provide voluntary services for families.

TWC presented its plan to develop and distribute content to raise awareness of the dangers associated with fentanyl and other opioids, including posters, emails and digital signage for local workforce development boards and the TWC website.

“[In October,] the Texas Workforce Commission, in partnership with the Office of the Governor and other state agencies, launched a collaborative awareness campaign to address the growing fentanyl crisis,” Treyger said. “The unified effort revolves around a simple message: #OnePillKills. TWC’s multi-channel messaging campaign, aimed at employers, employees, families and service providers, offers facts, highlights the impact of opioids and provides access to resources to be aware and be prepared.”

According to Johns Hopkins Medicine, some opioids can be derived from the naturally occurring compounds found in the opium poppy plant or be synthetically created by humans, but both types can cause the human brain to experience a range of effects. Opioids include legally prescribed drugs like OxyContin® and Vicodin®, as well as the illegally made versions of synthetic fentanyl and heroin.

Prescription opioids are used to treat patients with moderate to severe pain, and they work by blocking pain signals between the brain and body. When used as prescribed, opioids can be considered a safe short-term option for patients; many people, however, abuse them because of their euphoric effects. The illegal synthetic opioids, like fentanyl, act similarly to the prescribed version but are not set dosages, and are sometimes mixed with other drugs, making them extremely dangerous to use.

The United States currently faces an opioid epidemic, with 187 people dying daily due to opioid overdose and nearly 75 percent of drug overdoses in 2020 involving a form of opioid (Exhibit 3). Texas also faces the epidemic, with 1,612 deaths from fentanyl in 2021 compared with 886 deaths in 2020.

Ongoing Fight Against the Opioid Epidemic

For a closer look at the opioid crisis and the work Texas is doing at the border, be sure to read “Fentanyl Flowing into Texas.”