The Texas Budget Process: A Primer

The Texas budget process begins during the year prior to each regular session of the state's Legislature, which are held in odd-numbered years.

Each state agency prepares a detailed legislative appropriations request (LAR) under the guidelines of the state's Legislative Budget Board (LBB). These LARs itemize the funding each agency feels it needs to pursue its various tasks, and include performance measures designed to ensure the money is spent efficiently and effectively.

These LARs generally are sent to LBB, the Comptroller's office and several other state agencies by the end of summer or in early fall. The LBB and the Governor's Office of Budget, Planning and Policy hold hearings on their content.

In the fall before the session, LBB uses the LARs as a basis to prepare a draft of the state's general appropriations bill, which will provide state agencies and institutions with funding for the following two fiscal years.

At the beginning of the legislative session, the Comptroller's office issues its biennial revenue estimate (BRE), a careful estimate of the funds likely to be available from taxes and other revenue sources over the next two years. The Texas Constitution makes the BRE a cap on legislative spending for this period.

Both the Texas House Committee on Appropriations and the Senate Finance Committee hold hearings on the general appropriations bill, and make changes to it reflecting the BRE's limits and their funding priorities. When the committees complete their versions of the bill, they send them to the full House and Senate, respectively, for approval.

These two bills then go to a conference committee made up of members of both the House and Senate, which resolves their differences to produce a single bill reflecting the wishes of both bodies. Both houses then vote on this bill. Once approved, it goes to the Comptroller's office for "certification," a formal statement from the Comptroller that the bill spends no more than the amounts reflected in the BRE.

The bill then faces a final hurdle, the governor's signature. Texas has a "line-item veto," allowing the governor to trim individual spending items from the bill as he or she sees fit. (This veto can be overridden by a two-thirds majority vote in each house, but in practice the governor's decisions are rarely challenged.) 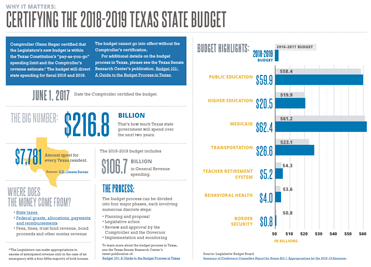 Comptroller Glenn Hegar certified that the Legislature’s new budget is within the Texas Constitution’s “pay-as-you-go” spending limit and the Comptroller’s revenue estimate.*

The budget will direct state spending for fiscal 2018 and 2019. The budget cannot go into effect without the Comptroller’s certification.

For additional details on the budget process in Texas, please see the Texas Senate Research Center’s publication, Budget 101: A Guide to the Budget Process in Texas (PDF) .

Billion
That’s how much Texas state government will spend over the next two years. 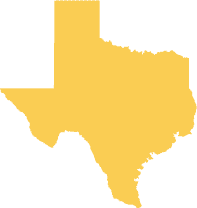 Amount spent for every Texas resident.

WHERE DOES THE MONEY COME FROM?

*The Legislature can make appropriations in excess of anticipated revenue only in the case of an emergency with a four-fifths majority of both houses.

The budget process can be divided into four major phases, each involving numerous discrete steps: 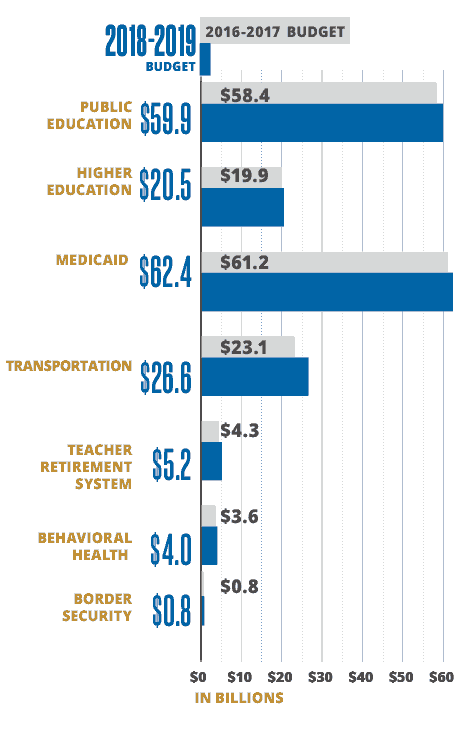