The 80th Legislature will have $82.5 billion available for general revenue-related appropriations for the 2008-09 biennium. This revenue will come from three sources: tax collections; non-tax receipts such as fees, lottery proceeds, and interest; and the 2006-07 biennium ending balance. (See Figure 1.) 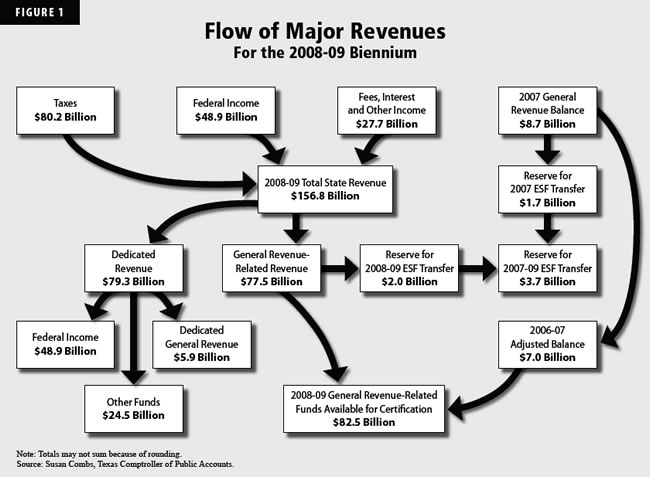 Aside from certain fund balances, only four funds affect the discretionary spending detailed in the General Appropriations Act. These funds, which are referred to as "general revenue-related funds," are the General Revenue Fund, the Available School Fund, the State Textbook Fund, and the Foundation School Fund Account. The remaining funds depend upon federal receipts or revenues that are dedicated by the constitution or by statute. A prime example is the constitutionally dedicated Permanent University Fund.

Since 1988, state sales tax revenues have accounted for more than half of all state general revenue-related tax collections and, over the longer term, have tracked fluctuations in the state's economy. For example, in 2002-03, the biennial growth rate dropped to 0.5 percent, due in large part to the national recession. Moreover, actual collections fell during each year of that biennium — the first such occurrence since the inception of the tax in 1961. The losses reversed in 2004-05, which registered a 10.1 percent biennial growth rate, followed by a 19.3 percent expected increase to $37.7 billion for 2006-07. Collections are expected to rise 10.1 percent to $41.5 billion in 2008-09, with fiscal 2008 growing somewhat faster than fiscal 2009.

On the heels of a 9.7 percent increase in 2004-05, franchise tax collections are expected to register a 35.4 percent increase to $5.4 billion in 2006-07, driven by strong growth in corporate profits, particularly in the energy sector. For 2008-09, franchise tax revenues will reflect an entirely revised tax structure, pursuant to HB 3, 79th Legislature, 3rd Called Session. Of the expected $11.9 billion total franchise tax revenues in 2008-09, an estimated $5.8 billion will remain in general revenue. In response to the downturn in the national economy, the rate of growth for the general revenue portion is expected to drop down to 7.6 percent.

In fiscal 2006, the average annual taxable price of oil rose 30.4 percent to $61.12 per barrel; likewise, the average annual taxable price of natural gas rose 29.8 percent, to $7.06 per thousand cubic feet (Mcf). Both figures represent a four-year climb to historic peaks, caused largely by burgeoning world demand and ongoing fears of supply disruptions, both weather- and political-related. As those concerns have moderated, so, too, have prices and price expectations. Consequently, oil production and regulation tax collections are expected to show a 39.4 percent increase, to $1.6 billion in 2006-07, down significantly from the 54.5 percent growth rate registered in 2004-05.

For 2008-09, revenues are expected to decline to $1.4 billion — a 13.6 percent drop, primarily because of lower prices, compounded by production declines. Most producers in the state continue to work old fields; and no significant discoveries have been made to arrest the long-term downward trend. Natural gas tax collections are expected to fall 15.1 percent to $3.5 billion in the upcoming biennium. As with the oil production tax, the drop is attributable to lower prices.

Although tax collections provide the most important source of general revenue-related funds, non-tax revenues are still important. Total general revenue-related non-tax receipts are estimated at $9.8 billion in 2008-09, down 8.5 percent from the $10.8 billion expected for 2006-07. License, fee, fine, and penalty revenues in 2000-09 are expected to contribute $2.5 billion, followed by lottery proceeds, at $2.1 billion.

Earnings on state investments also provide a significant source of non-tax revenue. The Permanent School Fund (PSF) distributes the largest component of this revenue source; and, largely due to a reduction in the Permanent School Fund distribution rate to 3.5 percent from 4.5 percent, the state's investment earnings are expected to show a 19.0 percent decline, to $1.5 billion in 2008-09.

Beyond general revenue-related funds, the state is expected to generate $79.3 billion in revenues dedicated for specific purposes and thereby unavailable for general spending. Federal receipts — many of which are driven by state appropriations — are expected to provide $48.9 billion and account for the majority of this revenue. Dedicated federal revenues are earmarked for such expenditures as Medicaid, highways and transportation, and education, among many other purposes.

Taking all state revenue sources into account, the state is expected to collect $156.8 billion in revenue for all state funds during the 2008-09 biennium.