The Texas high-cost tax rate incentive may not be perceived as favorably as the incentive granted by California and Pennsylvania in that neither has a state natural gas severance tax. Also, the Texas incentives for high-cost natural gas wells may not be as generous as those granted by three states surrounding Texas. In a study prepared for the Oklahoma Policy Institute, Headwaters Economics concluded that Texas' effective tax on an unconventional natural gas well was greater than the effective tax rate for Arkansas, Louisiana and Oklahoma. That study also found that Wyoming and New Mexico provided no incentives for the drilling of unconventional natural gas wells5.

Adequacy: With the high-cost natural gas tax rate reduction provision in place, annual natural gas production tax revenue has risen from $712 million (accruing to all funds, General Revenue as well as the Economic Stabilization Fund) in fiscal 1997 to $1,900 million in fiscal 2014. Over those 18 years the trend has been, in general, consistently upward, although with a large degree of variation. While collections would have been greater without the high-cost provision, overall revenue figures do not generally display a long-term downward trend. 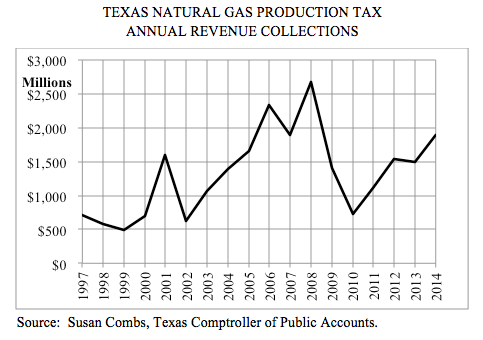 Equity: All natural gas production taxpayers who are similarly-situated — that is, have a natural gas well meeting the high-cost standards of the Texas Railroad Commission — receive a reduced tax rate. The amount of that reduction varies with the relationship between the median drilling costs for all high-cost wells and the drilling costs of a particular well, such that the higher the relative total drilling cost for that particular well the more the tax rate is reduced. Further, a taxpayer receives the reduced tax rate for no more than 10 years, or until such time as the tax reduction realized becomes equal to one-half of the cost of drilling the well. A very high producing well might receive the rate reduction for less than 10 years while a low producing high-cost well might receive the rate reduction for the full 10 years allowable under statute.

Economic Efficiency and Incentives: The existence of the reduced tax rate for high-cost natural gas wells in Texas could have the effect, likely in concert with other economic and financial factors facing a producer, of increasing the number of such wells drilled in Texas by providing an incentive.

With lower prices seen in recent years, the stability in production could partially be attributed to gains in technology which seem to provide higher initial and overall production rates for newly drilled wells. Additionally, production has remained stable owing to rapid gains in associated gas (casinghead gas) coming from oil well activity.

Exploration activity in Texas moved away from the Barnett Shale (a natural gas play) toward the Eagle Ford Shale (primarily an oil play) concurrent with natural gas prices falling in late 2008, and remaining at lower levels. While oil prices also fell in 2008, they quickly rose into the $80 range and continued to rise. Observing this movement from predominately natural gas exploration to that for oil, one might infer from those changes that economic factors outweighed other possible considerations, including this incentive.