The Comptroller’s office proposes using part of the Economic Stabilization Fund (ESF) to create a permanent endowment that would generate new revenue to address Texas’ pressing long-term obligations. The proposal would keep a healthy balance in the ESF and preserve its ability to protect state finances in times of economic volatility

State law requires a “SUFFICIENT BALANCE” to be kept in the ESF, which is supported mainly by oil and gas severance taxes. The sufficient balance is $7.5 billion through the 2020-21 biennium.

The proposed endowment, called the Texas Legacy Fund, would be created using dollars that exceed the sufficient balance.

As long as the Texas Stabilization Fund contains the required reserve balance, 50% of the annual severance tax would be transferred to the ESF, and any additional new dollars headed for the ESF would flow into a second tier, the Texas Legacy Fund, which would function much like an endowment, creating investment earnings dedicated to addressing the state's long-term obligations.

The corpus of the Texas Legacy Fund would not be spent. Instead, it would be smartly invested, generating earnings projected to total billions of dollars in future years.

The Texas Legacy Fund could allow the state to start addressing its long-term obligations – such as state employee pensions – without raising taxes or fees.

If the state does not address its underfunded pension system, Texas may face a downgrade in its credit rating, potentially increasing its borrowing costs and hurting its strong reputation for fiscal responsibility.

Currently, most of the ESF is invested in a way that does not even keep pace with inflation. In addition to creating the Texas Legacy Fund, the proposal by the Comptroller’s office would allow the money that remains in the ESF (the sufficient balance) to be invested with the objective of keeping pace with inflation.

More than three decades ago, the Texas Legislature decided to put aside a portion of state revenue from oil and natural gas severance taxes to be deposited into the Economic Stabilization Fund (ESF).

The ESF was intended as a hedge against revenue swings due to economic downturns, giving the state a “rainy day fund” to manage its finances in times of trouble.

But what started as a budget management tool has grown to an enormous asset to the state. The Comptroller’s recently released Biennial Revenue Estimate says that, absent any appropriations by the Legislature, the ESF balance is expected to be $15.4 billion at the end of the 2020-21 biennium.

Most of the ESF simply isn’t being used by the state, and the majority of it is invested in a way that in recent years hasn’t even kept up with inflation. That’s not much better than burying the money in a hole on the Capitol lawn.

The Comptroller is proposing an alternative to amassing so much tax revenue in the ESF. It calls for creating a special endowment, the Texas Legacy Fund, with part of the ESF balance.

This idea wouldn’t reduce the “sufficient balance” that must be kept in the ESF ($7.5 billion for the 2020-21 biennium). That amount would still be readily available to access. It wouldn’t affect the portion of oil and gas revenue dedicated to the State Highway Fund, either.

Money in the Texas Legacy Fund would be invested in a way that could yield billions of dollars in future years to meet the state’s long-term obligations.

As these charts show, using the money in this way could make both Texas’ state employee pension plan and its teachers’ pension plan actuarially sound in a little more than a decade.

If We Do Nothing

If the state doesn’t address its long-term obligations, it could face a downgrade in its credit rating that would be embarrassing and potentially financially harmful by increasing borrowing costs.

While not predicting a downgrade, S&P Global Ratings said in its January brief on Texas that it is watching the state’s pension issues closely. “As lawmakers work to craft the state’s new biennial budget, our focus will center on whether the state adheres to structural measures while considering long-term solutions to shore up its long-term liabilities, namely its pension liabilities,” it stated.

It makes sense for Texas to wisely invest the billions of dollars it has on hand meet these long-term obligations. 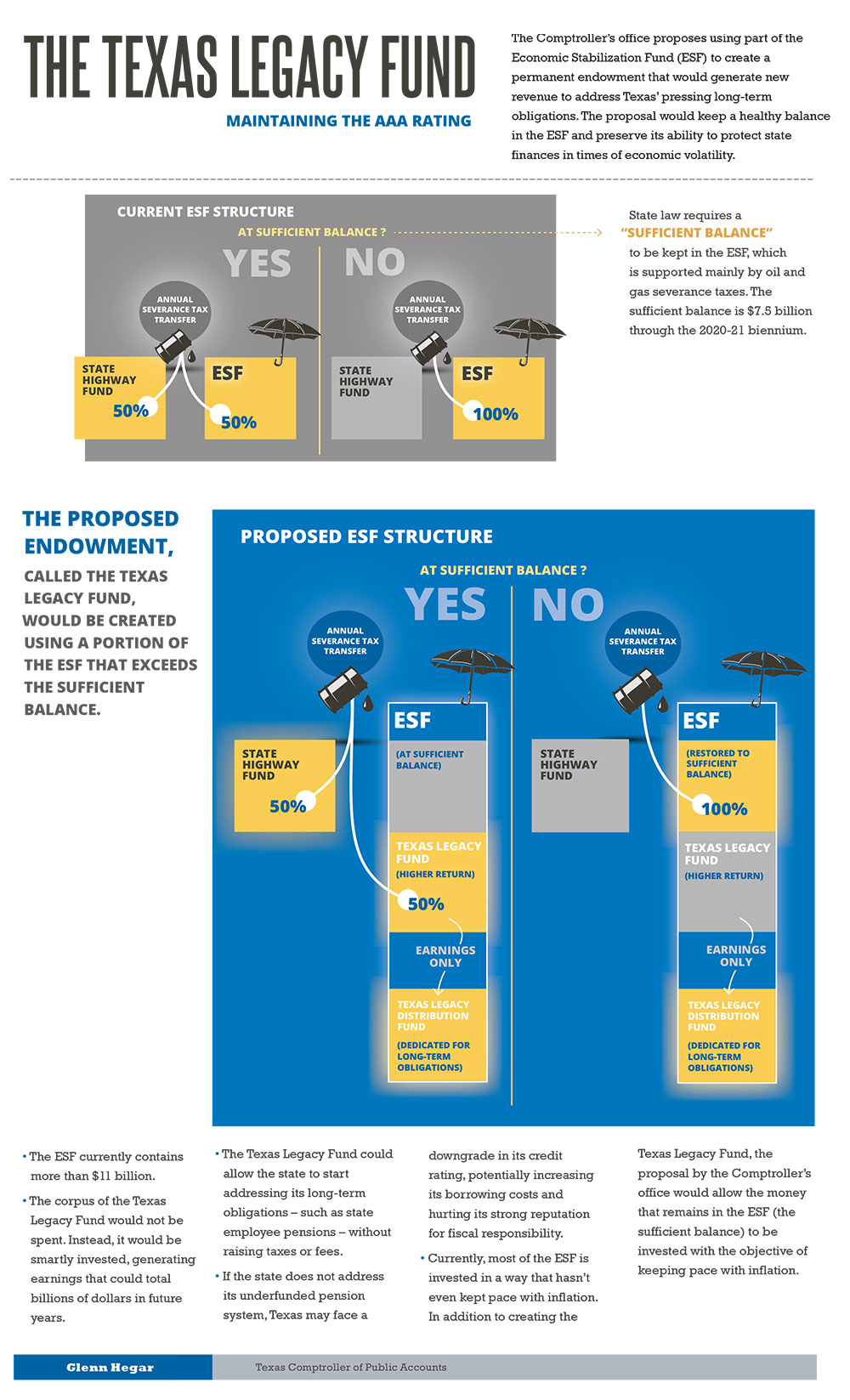 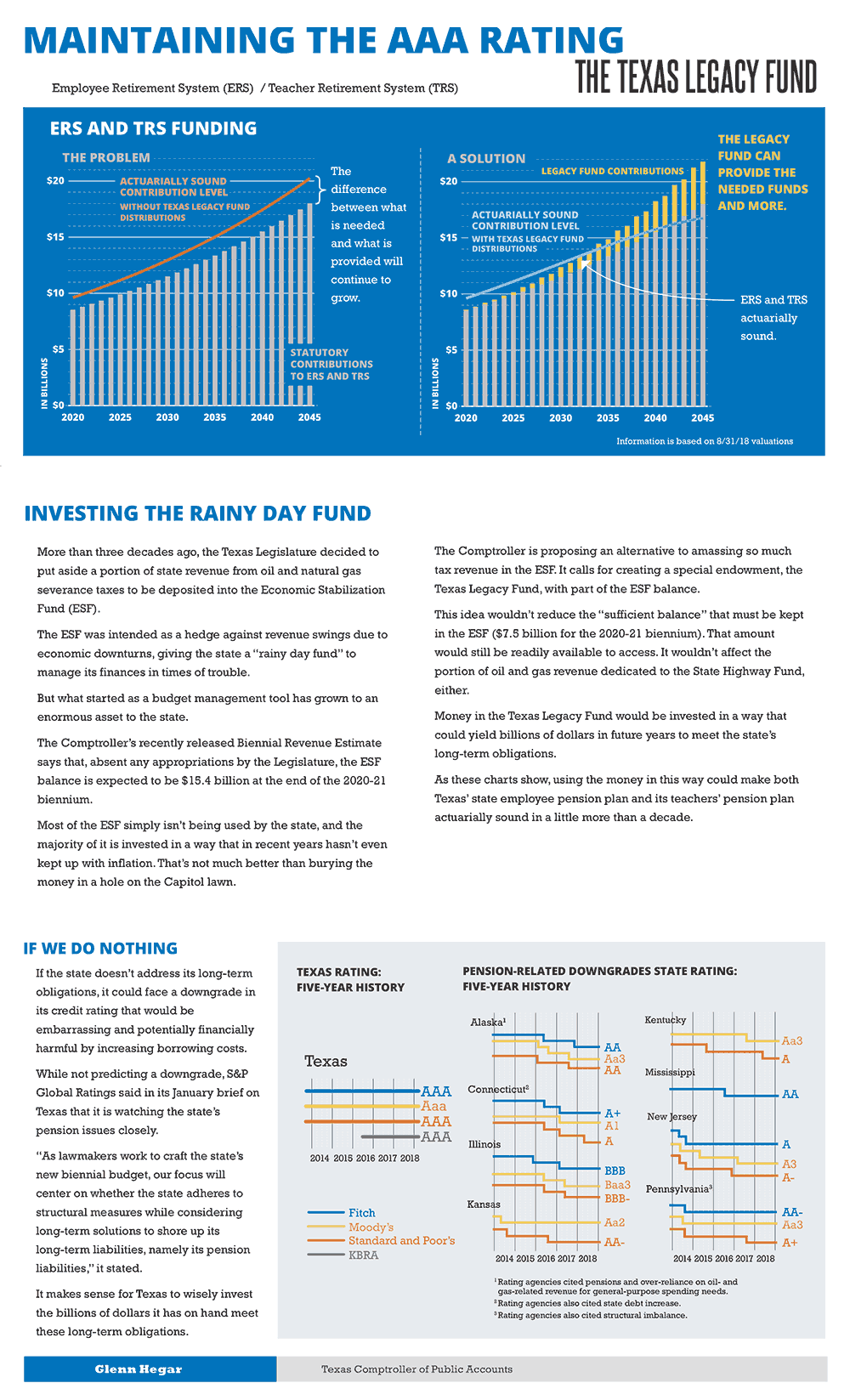