In accordance with Texas Government Code Section 403.0131, I hereby present the detailed tables for the revenue estimate I used to certify the General Appropriations Act for the 2018- 19 biennium and other appropriations bills approved by the 85th Legislature. The estimates in this document include actual revenue collections and disbursements through August 31, 2017, and the estimated fiscal impact of all legislation passed by the 85th Legislature.

After accounting for statutory transfers, balances on hand at the close of the 2016-17 biennium and expected revenue collections and adjustments, the state will have a total of $107.33 billion in General Revenue-related funds available. This revenue will support general-purpose spending of $107.23 billion for the 2018-19 biennium, resulting in an expected ending General Revenue-related certification balance of $94 million.

In fiscal 2018, the Economic Stabilization Fund and State Highway Fund (SHF) each will receive $734 million in transfers from the General Revenue Fund from severance taxes collected in fiscal 2017. We are projecting a modest increase in average oil prices in fiscal 2018, contributing to a larger fiscal 2019 transfer of $777 million to each fund.

In 2015, the Legislature passed and voters approved a constitutional amendment that would direct more revenue to the state’s transportation needs. As a result, up to $2.5 billion of state sales tax revenue in excess of $28 billion collected each fiscal year, beginning with fiscal 2018, will be deposited to the SHF. In fiscal 2018, we do not expect the $28 billion threshold to be reached until August, meaning that the first transfer of sales tax revenue to the SHF, projected at $2.31 billion, will occur in September 2018, which falls in fiscal 2019. We expect sales tax collections in fiscal 2019 to reach the $28 billion threshold in July, with $920 million transferred to the SHF in August 2019. Another $1.58 billion will be due to the SHF in September 2019, the first month of the 2020-21 biennium.

In fiscal 2017, the Texas economy returned to its normal pattern of growth in excess of the national rate of growth. We are projecting continued modest expansion of the Texas economy in this biennium. The most likely scenario is one of steady expansion after a brief slowdown due to Hurricane Harvey. Risks to this estimate include changes in global economic conditions, turbulence in energy prices and markets and national economic policies.

Adding to the uncertainty of this estimate is the impact of Hurricane Harvey. Some state agencies provided preliminary estimates of the costs associated with recovery efforts, as well as federal revenue expected to cover a majority of these costs. We have included these projections in our estimate. The projections, however, are certain to change in the coming months; and other agencies could not provide any estimates before the publication of this document.

I will continue to monitor the Texas economy and state revenues closely, and will keep you informed of any significant events as they arise. 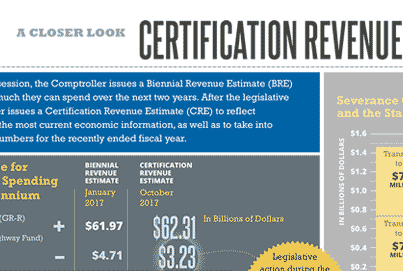 Prior to the legislative session, the Comptroller issues a Biennial Revenue Estimate (BRE) to tell lawmakers how much they can spend over the next two years. After the legislative session, the Comptroller issues a Certification Revenue Estimate (CRE) to reflect legislative activity and the most current economic information, as well as to take into account final revenue numbers for the recently ended fiscal year. 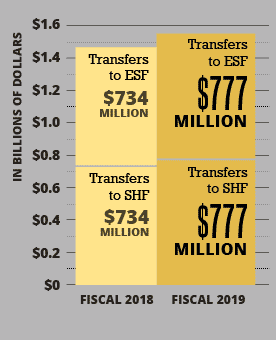 In fiscal 2018, $734 million will be transferred to both the Economic Stabilization Fund (ESF) and the State Highway Fund (SHF). In fiscal 2019, the two funds will receive $777 million. 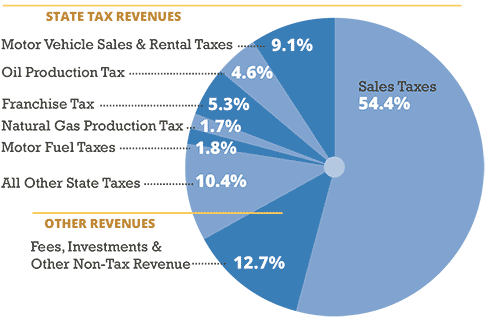