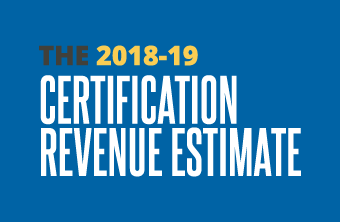 A few days ago, my office fulfilled one of its key statutory responsibilities by releasing the Certification Revenue Estimate (CRE), which lays out in detail the estimates we used to certify the Legislature's appropriations for the next two state fiscal years.

The CRE revises our Biennial Revenue Estimate (BRE), released before each regular session of the Legislature, to reflect the impact of new laws passed during the session and the latest economic data, and to report final revenue numbers for the fiscal year that ended on Aug. 31.

The CRE raises our BRE estimate of revenues available for general spending in 2018 and 2019 from $104.9 billion to about $107.3 billion, due largely to legislation approved in 2017. This amount will fully fund the budget enacted by the 85th Legislature with an estimated $94 million in certification revenue remaining at the end of the biennium. We expect the state's Economic Stabilization Fund — the "rainy day fund" — and the State Highway Fund (SHF) to each receive $734 million from general revenue in 2018, and $777 million each in fiscal 2019, due to a modest increase in oil prices and severance tax collections.

The new CRE largely reflects our economic outlook in the BRE. We expect steady economic growth for Texas during the next two years, at a rate faster than the nation's. Our forecast does, however, reflect some uncertainty concerning the impact of Hurricane Harvey.

We expect only a brief slowdown in the economy due to hurricane damage, but its costs to state government are harder to pin down right now. Some state agencies provided us with estimates of their Harvey-related costs, and federal aid we can expect to help defray them, but it's still too early for others. It may be months before we have a full picture of Harvey's effect on state spending.

Soon, we'll be releasing a special edition of Fiscal Notes providing our first estimates of the economic effects of Hurricane Harvey, so please check back with us.

You can read our press release on the CRE, or examine the entire document.