As I have pledged throughout my tenure as state comptroller, my office will update its revenue forecast as conditions warrant. As we prepared a cash flow estimate for fiscal 2019 to determine borrowing needs for the next issue of Tax and Revenue Anticipation Notes, it became apparent that revenue collections were running far enough ahead of our Certification Revenue Estimate (CRE) to justify an official update to our forecast of last October.

Due to better-than-expected economic and revenue growth through June of fiscal 2018 and an improved outlook for fiscal 2019, we now estimate the state will have $110.17 billion in General Revenue-Related (GR-R) funds available for general-purpose spending for the 2018-19 biennium, resulting in a projected fiscal 2019 ending balance of $2.67 billion. This ending balance does not account for any 2018-19 supplemental appropriations the Legislature may make.

Economic growth in Texas and the U.S. continued to accelerate after we released the CRE in October 2017. Texas in particular benefited from rising oil prices and production and the consequent increase in economic activity. The best ongoing indicator of the robust Texas economy is the state’s rate of job growth. Texas added more than 350,000 new jobs in the 12 months ending in May 2018, and the state’s unemployment rate has been at or near historic lows in recent months. An economic expansion exceeding our expectations from last year has resulted in revenue collections outpacing CRE projections.

The forecast for fiscal 2019 also has improved. This is partly due to the stimulative effects of federal tax cuts and increased federal spending, though rising federal deficits may dampen long-term growth. Combined with fiscal 2018 revenues exceeding CRE projections, the improved economic outlook results in forecasted fiscal 2019 revenue collections greater than anticipated in the CRE.

Our office will transfer any revenue due to the SHF in the month after the relevant sales taxes are collected. The first allocation of fiscal 2019 sales tax collections to the SHF, an estimated $2.25 billion, will be made in August 2019, with the remaining $250 million from fiscal 2019 collections due the SHF in September 2019, the first month of fiscal 2020.

In November 2017, our office deposited $734 million to the state’s Economic Stabilization Fund (ESF) from fiscal 2017 oil and natural gas production tax collections. We allocated an equal amount to the SHF, as required by the Texas Constitution. We now project that $2.74 billion from fiscal 2018 collections of these taxes will be divided between the ESF and SHF with each receiving $1.37 billion in the first quarter of fiscal 2019. The ESF will have a balance of about $11.85 billion at the end of fiscal 2019, the largest ending balance in the fund’s history. Nearly $3.2 billion will be set aside from fiscal 2019 collections for transfers of almost $1.6 billion to each fund in the first quarter of fiscal 2020.

Though the outlook has improved considerably from our CRE forecast, the next legislative session remains one in which lawmakers are likely to face revenue constraints relative to spending demands for the 2020-21 biennium. The Legislature almost certainly will need to make supplemental appropriations to the 2018-19 budget that, if funded from general revenue, will reduce the projected fiscal 2019 ending balance of $2.67 billion.

In addition to sales tax revenue constitutionally dedicated to the SHF, other requirements of state and federal law will reduce GR-R in the 2020-21 biennium below what otherwise would be available for general-purpose spending. Among the provisions affecting available revenue will be federal law prohibiting the state from collecting sales tax on internet services that takes effect in 2020; a shortfall in the state’s original prepaid tuition program that the Constitution requires to be made whole from general revenue; and the constitutional dedication to the SHF of a portion of motor vehicle sales and rental tax collections in excess of $5 billion each year.

This revised estimate is based on a positive outlook for economic growth in the U.S. and Texas. The national economy is in the midst of the second-longest expansion on record and will set a new longevity record if it continues to grow for another year. Nevertheless, while it may be true that economic expansions do not die of old age, it’s virtually certain that we will eventually face an economic contraction that puts pressure on state revenue collections.

Though nearly all current economic indicators remain positive and revenue collections have exceeded our previous expectations, there are significant downside risks to the forecast. The value of Texas exports exceeds that of any other state and we are the country’s second-leading importer. The Texas economy benefits from international trade, particularly in North America. Federal policy affecting such trade, including a withdrawal from the North American Free Trade Agreement (NAFTA), would directly harm the state’s economic growth. Escalating tariffs also pose a potential threat to trade and the Texas economy and could harm some of our state’s leading industries while slowing our economic growth.

Our economy — and state revenues — also can be affected by sudden swings in the price of oil. In fact, climbing oil prices and production are a primary contributor to this fiscal year’s remarkably strong revenue growth. A downturn in those prices could result in fiscal 2019 revenue collections falling short of this updated forecast.

The current outlook, however, is for continued growth through fiscal 2019 for both the economy and state revenue. I will continue to monitor conditions and keep you informed of any significant events ahead of our next official forecast in the 2019 Biennial Revenue Estimate. 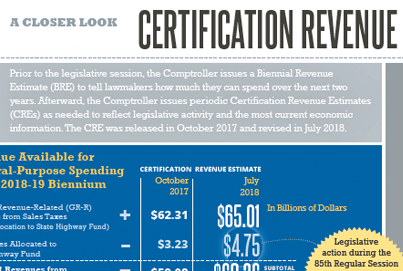 Prior to the legislative session, the Comptroller issues a Biennial Revenue Estimate (BRE) to tell lawmakers how much they can spend over the next two years. Afterward, the Comptroller issues periodic Certification Revenue Estimates (CREs) as needed to reflect legislative activity and the most current economic information. The CRE was released in October 2017 and revised in July 2018. 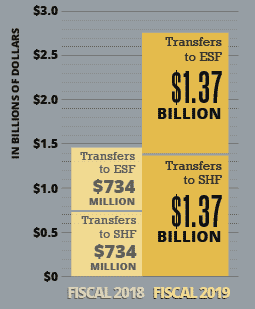 In fiscal 2018, $734 million will be transferred to both the Economic Stabilization Fund (ESF) and the State Highway Fund (SHF). In fiscal 2019, the two funds will each receive $1.37 billion. 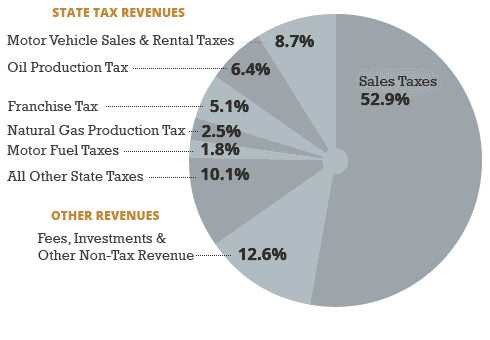