Glenn Hegar, For the Express-News

The recent editorial on my proposal to change the way in which the state’s $11 billion “rainy day fund” is invested (“Risky plan for rainy day fund doesn’t fix problem,” Sunday) sets a goal I never intended — and then criticizes me for failing to meet it. 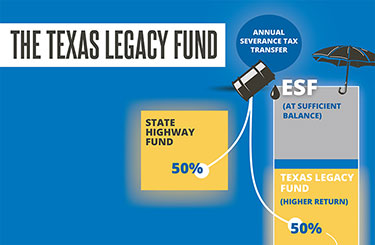 Let’s be clear about this: Texas faces potentially serious budget difficulties in areas from employee pensions and retiree health care to prepaid college tuition programs to badly aging infrastructure. Absent any action to curb the trend, these ever-growing obligations stand a real chance of lowering the state’s credit rating and thus raising our cost of borrowing, creating the vicious cycle that has devastated the finances of other states and cities throughout the U.S.

I’ve been warning the Legislature about the consequences of these long-term obligations since I became state comptroller, and I’ll continue to do so.

My proposal isn’t a panacea. It would, however, allow the state to at least begin addressing our long-term obligations in a way not bound to the endless cycle of two-year budgets. Briefly, we’ve proposed placing a portion of the Economic Stabilization Fund, or ESF — the rainy day fund — into an account we call the Legacy Fund. This fund would be used to create a prudent investment portfolio, similar to those operated by many private foundations. The principal would remain intact while the earnings would be devoted specifically to addressing long-term state obligations.

True, it wouldn’t raise enough to “fix” our budget problems — I never said it would. The $111 million we could raise during the state’s next biennium isn’t a huge sum in terms of the budget. But when you look down the road for 10 years, the fund would potentially be spinning off nearly a billion dollars a year for vital state purposes — not an insignificant amount.

The second, and more serious, charge in the editorial is that my proposal would somehow endanger the ESF in any future economic downturn. That’s simply not the case.

The comptroller’s office is entrusted with managing around $60 billion of the taxpayers’ money. Some of those dollars are spent in accordance with the state budget, while other money under our management is invested specifically to produce higher annual long-term returns. For example, my office invests the tobacco settlement funds and distributes the earnings each year to local hospitals in Texas. We successfully managed these funds through both the dot-com bust and the Great Recession. While they suffered temporary declines in value, their corpus has continued to grow and they have continued to produce significant returns for hospitals.

Similarly, we manage the state’s Water Infrastructure Fund, producing revenue for investment in water projects to meet the future needs of a growing state economy. The point is, there’s nothing new about investing state dollars for long-term projects.

Texas is blessed with a strong oil and gas economy, yet the past — even the recent past — has taught us that booms don’t last forever. The ESF is funded almost entirely by our energy production taxes and was designed to put aside some of this revenue during oil booms to protect the state against the leaner times that follow a bust. As Texas comptroller, it’s quite amazing to me that nearly every other oil-producing state has a better plan for investing these taxes.

We’re blessed to have the rainy day fund, yet Texas law forces us to keep much of it as if it were petty cash, earning almost nothing. That portion of our savings isn’t even keeping up with inflation; it’s not much better than stuffing the money under a mattress. Due to the current letter of the law, we’re losing the purchasing power of taxpayer money every year.

Today, we have much better options. My proposal isn’t particularly revolutionary. Instead, we simply want to do what other states are already doing, and what my office has been doing for years with other money we manage — to keep it safe while using it to earn more for Texans.

Glenn Hegar is the Texas Comptroller of Public Accounts.