According to a 2016 Federal Reserve Bank of Dallas report, this problem disproportionately affects rural communities, communities of color and low-income families. Since that report’s publication, the COVID-19 pandemic has accelerated the adoption of technology for some but expanded the digital divide for others. The digital divide refers to the gap between those with broadband access and those without, whether caused by a lack of infrastructure, digital literacy, affordable service or access to devices.

In an effort to close this divide, the 87th Texas Legislature created the Broadband Development Office (BDO) at the Texas Comptroller of Public Accounts. The BDO is charged with broadband expansion, which includes establishing an official statewide plan for expanding access. The Legislature appropriated $5 million to the Comptroller to administer the program. Additionally, the American Rescue Plan Act enacted by the federal government has allocated $500.5 million to Texas for broadband expansion, while the Infrastructure Investment and Jobs Act will allocate at least $100 million.

These combined state and federal dollars comprise a valuable resource, and our office is committed to using these funds as efficiently and effectively as possible. In March 2022, we launched the Texas Broadband Listening Tour, conducting regional town halls in 12 Texas communities so we could hear directly from Texans about their experiences with broadband. These stories, some of which appear in this report, are powerful and moving. Additionally, we issued an open invitation to all Texans to participate in a public broadband survey — available online, in print and via telephone in both English and Spanish. At the time of publication, more than 16,000 Texans have used our survey to share their broadband experiences.

Sentiment has been consistent: slow data speeds, unreliable access, affordability and coordination are critical areas of concern for Texas families, businesses, educators and farmers. An important, recurring theme has been the reminder that though high-speed internet may once have been a luxury, it is now a necessity. Texans need reliable, high-speed connectivity for public health, safety, education and modern agriculture.

We compiled lessons learned from the Texas Broadband Listening Tour, survey responses, analysis of results and staff recommendations to create this initial Texas Broadband Plan. We hope you find this plan useful, insightful and sound, as a road map for improvement. This is a monumental task, and we must work together to accomplish it. Expanding broadband access will require collaboration and partnerships between local governments and private entities, across counties and among residents.

We invite you to learn more about the BDO and our mission to connect Texas at BroadbandForTexas.com.

The Texas Broadband Development Office will accomplish the following by early 2023:

Building a Plan, Listening to Texans 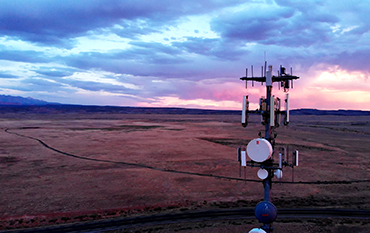 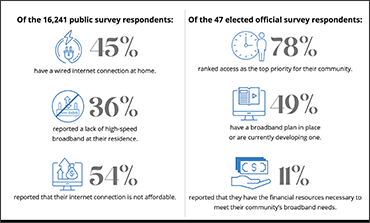 Of the 16,241 public survey respondents:

have a wired internet connection at home.

reported a lack of high-speed
broadband at their residence.

reported that their internet connection is not affordable.

Of the 47 elected official survey respondents:

ranked access as the top priority for their community.

have a broadband plan in place
or are currently developing one.

reported that they have the financial resources necessary to meet their community’s broadband needs.