Construction Overview Women in the Workforce

The construction sector builds, alters and maintains residential and nonresidential buildings and infrastructure. From 2007 to 2010, construction lost a sizable number of jobs and many of them did not return after the recession. In 2016, construction contributed $91.2 billion dollars to Texas’ economy. Women account for 19 percent of the state’s 726,000 jobs in this sector.

Average regional multipliers for construction sector were used to estimate how an initial economic input in the sector, in the form of sales, jobs or earnings, affect the greater Texas economy. These multipliers capture “indirect” effects on industries that supply goods and services to the sector as well as “induced” effects on industries that sell local goods and services — such as housing, food or entertainment — to workers in the construction sector and its suppliers (Exhibit 1).1

In 2017, women held nearly 136,000 jobs in construction (Exhibit 2). Those jobs generate additional business activities that ultimately support about 162,000 jobs in all other industries of the Texas economy.2

*The North American Industry Classification System (NAICS) is the federal system used to classify business establishments for statistical purposes.
**Based on total jobs in the industry including both genders. Earnings include salaries, wages, benefits and other compensation.
***Location quotient (LQ) indicates the relative concentration of women in these jobs in Texas versus in the nation as a whole.

Women accounted for 21 percent of all Texas jobs in the construction of buildings — the highest employment share among construction’s subsectors. Women held the highest number of jobs in specialty trade contractors (77,990).

Based on location quotient (LQ), a measure of employment concentration in a given area, the concentration of Texas women in construction jobs was higher than the national concentration in 2017. Within the sector, women working in the specialty trade contractor subsector are the most concentrated in Texas, with an LQ of 1.21.

Women in construction most commonly work in professional and administrative occupations, such as accountants and office clerks.

In 2016, women in construction earned $4,102 per month on average, up 26 percent from 2010 (Exhibit 4). Construction worker earnings often vary from month to month, due to the cyclical and seasonal nature of the sector and many of its occupations.

Exhibit 4: Growth in Average Monthly Earnings of Texas Women in Construction (Indexed from 2010) 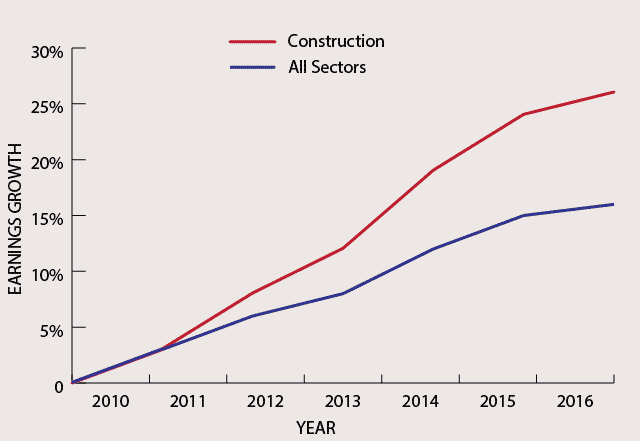 Of all sectors of the Texas economy, construction has the lowest share of jobs held by women, although their concentration in these jobs is higher in Texas than in the nation. Texas women working in construction generate additional business activities that ultimately support about 162,000 jobs in all other industries of the state economy.