Other Services (excluding public administration) Overview Women in the Workforce

The other services (except public administration) sector consists of four subsectors — repair and maintenance; personal and laundry services; religious, grantmaking, civic, professional and similar organizations; and private households. In 2016, other services contributed $34.1 billion to the Texas economy. Women account for 51 percent of the state’s 482,000 jobs in this sector.

Average regional multipliers for other services were used to estimate how an initial introduction of economic input in the sector, in the form of sales, jobs or earnings, affects the greater Texas economy. These multipliers capture “indirect” effects on industries that supply goods and services to the sector as well as “induced” effects on industries that sell local goods and services — such as housing, food or entertainment — to workers in the other services sector and its suppliers (Exhibit 1).1

Texas Women in Other Services

In 2017, women held nearly 244,000 jobs in other services (Exhibit 2). Those jobs generate additional business activities that ultimately support about 172,000 other jobs elsewhere in the Texas economy.2

In 2017, women accounted for more than half of all subsectors of other services, with the exception of repair and maintenance, which provides general and routine maintenance on machinery, equipment and other products.

Exhibit 3 lists the top occupations employed in other services by number of jobs. Women dominate secretaries and administrative assistants; hairdressers, hairstylists and cosmetologists; and childcare workers, with 95 percent, 90 percent and 92 percent of jobs, respectively.

Exhibit 4: Growth in Average Monthly Earnings of Texas Women in Other Services (Indexed from 2010) 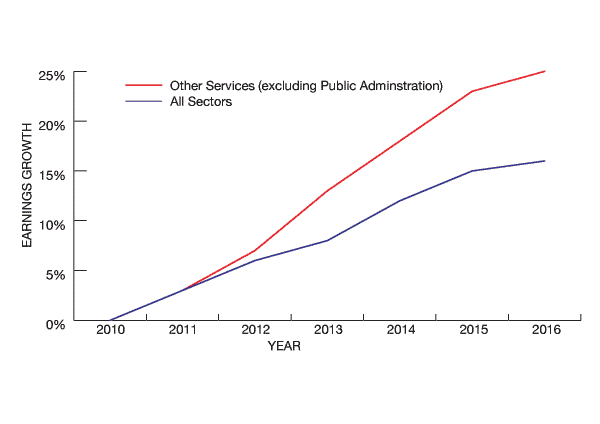 Of all women-owned businesses nationwide, 23 percent were in other services in 2017 — the highest share of any sector. The other services sector provides tremendous opportunities to women entrepreneurs as well as workers, most notably those in private households and personal care and laundry services, where women account for more than 60 percent of total employment. Texas women working in other services generate additional business activities that ultimately support about 172,000 jobs in other industries throughout the state economy.