Leisure and Hospitality Overview Women in the Workforce

The leisure and hospitality industry, sometimes called a “super sector,” comprises two distinct sectors — arts, entertainment and recreation and accommodation and food services — both of them heavily driven by trends in consumer spending. In 2016, leisure and hospitality contributed $57.9 billion to Texas’ gross state product (GSP). Women account for 51 percent of the state’s 1.3 million jobs in this industry.

Average regional multipliers for leisure and hospitality were used to estimate how an initial introduction of economic input in the industry, in the form of sales, jobs or earnings, affect the greater Texas economy. These multipliers capture “indirect” effects on industries that supply goods and services to the industry as well as “induced” effects on industries that sell local goods and services — such as housing, food or entertainment — to workers in the leisure and hospitality industry and its suppliers (Exhibit 1).1

The overall multiplier effects are as follows:

Texas Women in Leisure and Hospitality

In 2017, women held more than 670,000 jobs in leisure and hospitality (Exhibit 2). Those jobs generate additional business activities that ultimately support about 530,000 jobs in all other industries of the Texas economy. 2

In 2017, of all Texas women working in arts, entertainment and recreation, 72 percent (46,924) worked in the amusement, gambling and recreation industries subsector.  Women had the highest share of total employment in museums, historical sites and similar institutions, with 60 percent of all Texas jobs in the subsector.

Exhibit 3 lists the top occupations in the arts, entertainment and recreation sector by number of jobs within the sector. Women account for more than half of all fitness trainers and aerobics instructors, the occupation with the second-highest employment in the sector.

The accommodation and food services sector, which produces most of the jobs in this industry, provides lodging and prepares meals, snacks and beverages for human consumption.

Women held significant shares of jobs in accommodation and food services’ top two occupations, accounting for 61 percent of food preparation and serving workers and 67 percent of waiters and waitresses (Exhibit 4).

From 2010 to 2016, the average monthly earnings of women increased in both sectors of leisure and hospitality. Women working in accommodation and foods services saw their earnings increase the most, by 18 percent — slightly more than the 16 percent earnings growth for women in arts, entertainment and recreation (Exhibit 5).

In 2016, Texas women in arts, entertainment and recreation and accommodation and food services earned an average of $2,054 and $1,628 per month, respectively.

Exhibit 5: Growth in Average Monthly Earnings of Texas Women in Leisure and Hospitality (Indexed from 2010) 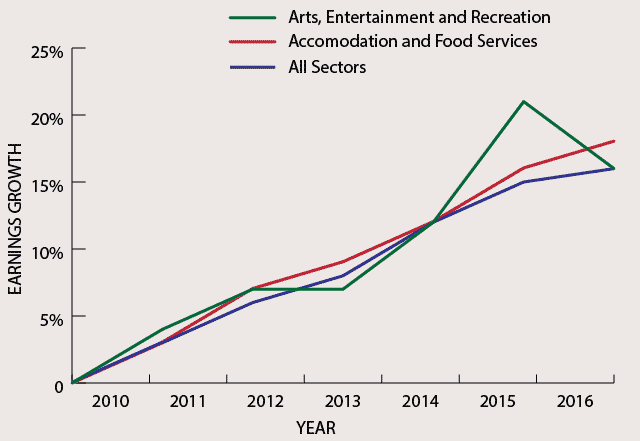 Despite being one of Texas’ lowest-paying industries, leisure and hospitality is an important indicator of the strength of the state economy. Since 2010, Texas has added more than 296,000 jobs to reflect the increased free time and disposable income of state consumers post recession. Women play a significant role in the industry and are well represented in its largest occupations. Texas women in leisure and hospitality generate additional business activities that ultimately support about 530,000 jobs in other industries throughout the state economy.