The financial activities industry, sometimes called a “super sector,” comprises two distinct sectors: finance and insurance and real estate and rental and leasing. Both have faced a host of opportunities and challenges due to changing technologies and the regulatory environment. In 2016, financial activities contributed $243.4 billion to Texas’ gross domestic product (GDP). Women account for 56 percent of the state’s 740,000 jobs in this industry.

Average regional multipliers for financial activities were used to estimate how an initial introduction of economic input in the industry, in the form of sales, jobs or earnings, affects the greater Texas economy. These multipliers capture “indirect” effects on industries that supply goods and services to the industry as well as “induced” effects on industries that sell local goods and services — such as housing, food or entertainment — to workers in the financial activities industry and its suppliers (Exhibit 1).1

The overall multiplier effects are as follows:

In 2017, women held nearly 416,000 jobs in financial activities (Exhibit 2). Those jobs generate additional business activities that ultimately support about 1.5 million jobs in all other industries of the Texas economy. 2

The finance and insurance sector primarily raises funds through deposits and issuance of securities, underwrites insurance or annuities and provides financial intermediation and employee benefit programs. This sector supplied the majority of the industry’s employment in 2017.

Exhibit 3lists the top occupations employed in finance and insurance based on the number of jobs in the sector. Though women account for more than half of three of the sector’s top five occupations, they dominate two occupations, tellers and insurance claims and policy processing clerks, in which they accounted for 86 percent and 82 percent of all 2017 jobs, respectively.

Real Estate and Rental and Leasing

In 2017, women held 91,153 jobs in the real estate and rental and leasing sector, which primarily engages in and provides services related to renting, leasing and purchasing tangible or intangible assets. 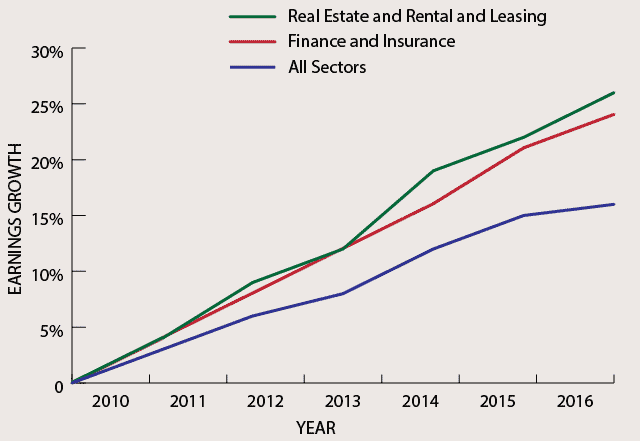 The financial activities industry represents two large, dynamic sectors that generally grow in line with the wider economy. The industry continues to operate as an important employer in Texas, contributing the highest share of economic income despite having low employment relative to other industries. Texas women working in financial activities generate additional business activities that ultimately support about 416,000 jobs in other industries throughout the state economy.