Manufacturing Overview Women in the Workforce

The manufacturing sector transforms materials, substances or components into new products using mechanical, physical or chemical processes. As one of the broadest sectors of the economy, manufacturing includes 21 subsectors that create a wide range of products, from food and beverages to petrochemicals and automobiles. In 2016, manufacturing contributed $218.3 billion to Texas’ economy, the second-highest contributor behind financial activities. Women account for 27 percent of the state’s 843,000 jobs in this sector.

Average regional multipliers for the manufacturing sector were used to estimate how an initial introduction of economic input in the sector, in the form of sales, jobs or earnings, affects the greater Texas economy. These multipliers capture “indirect” effects on industries that supply goods and services to the sector well as “induced” effects on industries that sell local goods and services — such as housing, food or entertainment — to workers in the manufacturing sector and its suppliers (Exhibit 1).1

In 2017, women held nearly 229,000 jobs in manufacturing (Exhibit 2). Those jobs generate additional business activities that ultimately support about 609,000 jobs in all other industries of the Texas economy.2

In 2016, women in construction earned $4,705 per month on average, up 19 percent from 2010 (Exhibit 4). Earnings in manufacturing vary widely among the subsectors. The three subsectors with the highest shares of women — apparel manufacturing, textile product mills and leather and allied product manufacturing — are among the lowest-paid manufacturing fields.

Exhibit 4: Growth in Average Monthly Earnings of Texas Women in Manufacturing (Indexed from 2010) 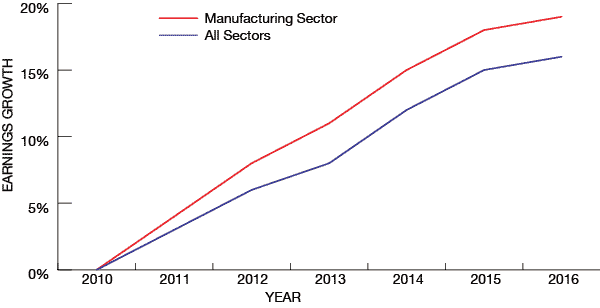 The manufacturing sector faces a number of challenges, most notably a shortage of trained and skilled workers. In the last few decades, industry leaders increasingly have viewed women as a solution to their skills needs. The number of women in manufacturing is growing slowly but steadily, due to various initiatives steering women into science, technology, engineering and math, but the sector is also working to change the public perception of manufacturing as a career choice and modernizing the workplace in ways that will attract younger generations.

Currently, women working in manufacturing generate additional business activities that ultimately support about 609,000 jobs in all other industries of the state economy. With time, Texas’ manufacturing sector will increasingly reap the benefits of women’s unique perspectives and leadership styles.