Trade, Transportation and Utilities Overview Women in the Workforce

In 2016, trade, transportation and utilities contributed $317.3 billion to Texas’ GDP. Women account for 40 percent of the state’s 2.4 million jobs in this industry.

Average regional multipliers for trade, transportation and utilities were used to estimate how an initial introduction of economic input in the industry, in the form of sales, jobs or earnings, affect the greater Texas economy. These multipliers capture “indirect” effects on industries that supply goods and services to the industry as well as “induced” effects on industries that sell local goods and services — such as housing, food or entertainment — to workers in the trade, transportation and utilities industry and its suppliers (Exhibit 1).1

*The multiplier effect in this analysis is applicable to any worker in the trade, transportation and utilities industry and does not differentiate effects by gender.

For every 100 jobs created, an additional 178 jobs are created or affected in all other industries within the Texas economy.

In 2017, women held nearly 985,000 jobs in trade, transportation and utilities (Exhibit 2). Those 985,000 jobs generate additional business activities that ultimately support about 1.8 million jobs in all other industries of the Texas economy.2

*The North American Industry Classification System (NAICS) is the federal system used to classify business establishments for statistical purposes.
**Based on total jobs in the industry including both genders. Earning include salaries, wages, benefits and other compensation.
***Location quotient (LQ) indicates the relative concentration of women in these jobs in Texas versus in the nation as a whole. The higher the LQ value, the more “concentrated” women’s employment is in Texas.

The retail trade sector produces the most employment in this industry, accounting for 55 percent of the total (1,326,367 jobs). Note, however, that the sector has high numbers of part-time and seasonal jobs from year to year. The sector has changed rapidly within the last decade, with the rise of convenience shopping and e-commerce.

Of all Texas women working in trade, transportation and utilities, 67 percent (662,735) work in retail trade. Women hold half of all jobs in Texas’ retail trade sector.

Wholesalers typically sell merchandise to other businesses, governments and institutions rather than the general public.

Transportation and warehousing sector transports passengers and cargo and provides warehousing and storage for goods.

The concentration of utilities jobs held by Texas women was slightly higher than the national concentration, based on an LQ of 1.13. In 2017, the largest number of women were employed in the electric power generation, transmission and distribution subsector, with 9,828 jobs (27 percent of the total). Women held the highest share of jobs in water, sewage and other systems,at 29 percent (1,768 jobs).

From 2010 to 2016, average monthly earnings of women increased in all four sectors of trade, transportation and utilities. Women working in wholesale trade saw their earnings increase the most, by 20 percent over the period (Exhibit 3). Women working utilities had the highest average monthly earning in 2016 ($5,483). On average, Texas women in retail trade, wholesale trade and transportation and warehousing earned $2,294, $5,090 and $3,867 per month, respectively.

Exhibit 3: Growth in Average Monthly Earnings of Texas Women in Trade, Transportation and Utilities (Indexed from 2010) 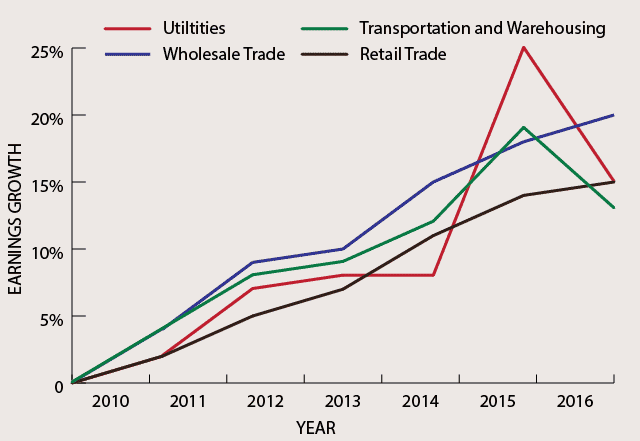 Texas women working in trade, transportation and utilities generate additional business activities that ultimately support about 1.8 million jobs in other industries throughout the state economy. Texas has a higher concentration of women working in the transportation and warehousing and utilities sectors than in the nation. Retail trade, however, has the highest number of jobs held by women.

Links are correct at the time of publication. The Comptroller's office is not responsible for external websites.