Information Overview Women in the Workforce

The information sector processes, produces and distributes data as well as various informational and cultural products. Technological advances have reduced employment gains within the sector, primarily in print-based publishing, broadcasting and telecommunications. In 2016, information contributed $55.3 billion to the Texas economy. Women account for 37 percent of the state’s 202,000 jobs in this sector.

Average regional multipliers for information were used to estimate how an initial introduction of economic input in the sector, in the form of sales, jobs or earnings, affect the greater Texas economy. These multipliers capture “indirect” effects on industries that supply goods and services to the sector as well as “induced” effects on industries that sell local goods and services — such as housing, food or entertainment — to workers in the information sector and its suppliers (Exhibit 1).1

In 2017, women held more than 75,000 jobs in information (Exhibit 2). Those jobs generate additional business activities that ultimately support about 187,000 other jobs in all other industries of the Texas economy. 2

*The North American Industry Classification System (NAICS) is the federal system used to classify business establishments for statistical purposes.
**Based on total jobs in the industry including both genders.

Job growth and declines in subsectors of information truly reflect the changing demands of consumers and impact of automation. Though information added more than 6,600 positions from 2010 through 2017, overall growth was stymied by significant job losses in non-internet-related publishing and broadcasting and telecommunications.

Women make up 67 percent of customer service representatives, one of information’s top occupations by number of jobs (Exhibit 3).

From 2010 to 2016, the average monthly earnings of women in information rose by 22 percent, outpacing the growth in monthly earnings of Texas women in all other sectors of the economy (Exhibit 4). Texas women in information earned an average of $5,365 per month, the fourth-highest average monthly wage, behind women working in the mining, quarrying and oil and gas extraction ($8,997), management of companies and enterprises ($5,598) and utilities ($5,483).

Exhibit 4: Growth in Average Monthly Earnings of Texas Women in Information (Indexed from 2010) 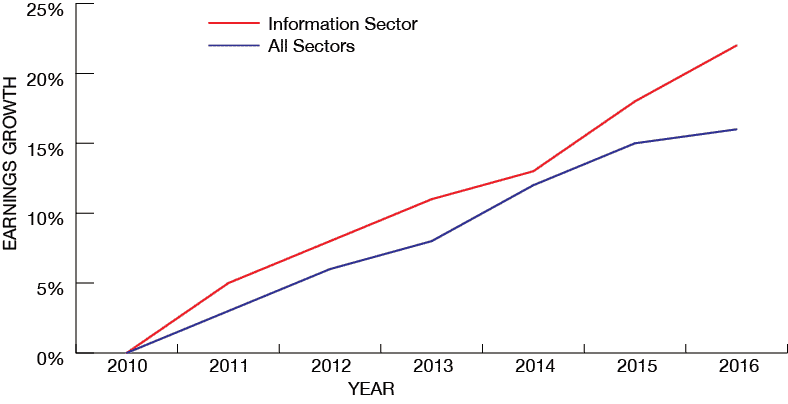 While the demand for information has risen dramatically, technological advances increasingly have made the largely automated internet the preferred mode for its consumption. Within the information sector, women hold the highest share of total employment in establishments that facilitate the exchange of information over the internet. Texas women working in information generate additional business activities that ultimately support about 187,000 jobs in other industries throughout the state economy.

Use these lookup tools at other state agency websites to continue research of regional economic data.