U.S. and Texas manufacturers of textiles, apparel and leather have incurred significant job losses as production has steadily moved overseas to cheaper labor markets. Some areas of Texas – like El Paso – still maintain a large presence of textile and apparel jobs, but these areas, too, have experienced heavy job losses within these subsectors.

There is evidence of startup activity in American factories, as businesses focus on innovation and quality. Some advanced products and materials can only be produced in the U.S., and there is increased demand from consumers for environmentally sustainable and ethically produced products. Firms also recognize that having production nearby improves quality control and the ability to meet demand faster.

Textile mills:
This subsector transforms a basic fiber into a product such as yarn, thread or fabric. These products are further used to manufacture consumer items like clothing, carpets, sheets, towels, upholstery, textile bags and other similar items.
Textile product mills:
This subsector manufactures textile products (except apparel) from purchased fabrics, generally using cut and sew processes.
Apparel manufacturing:
This subsector produces clothing for men, women and children, including fabric accessories, such as hats, gloves and neckties. Establishments in this subsector may manufacture products through cut and sew processes of purchased fabrics, or establishments may first knit fabrics to further cut and sew into finished garments.
Leather and allied products
This subsector transforms hides into leather for final consumption. Common products include luggage and handbags, as well shoes and boots.
The subsector also includes products made from “leather substitutes,” such as rubber, plastics and textiles. Examples include plastic purses and wallets, textile luggage and rubber footwear. These products are made using similar processes to leather product manufacturing and are often manufactured in the same establishments.

There were just over 17,100 textile, apparel and leather manufacturing jobs in Texas in 2016. The average annual wage for these jobs was about $36,200. The top occupations within these subsectors include sewing machine operators, knitting and weaving machine setters, and shoe and leather workers and repairers.

The presence and share of these subsector jobs in Texas is small compared with the U.S. average – with the exception of leather and allied products manufacturing. Texas has a lower share of employment in these subsectors than nationally, as gauged by location quotient (LQ), a measure of employment concentration in a given area compared to a larger region. An LQ value of 1.00 means employment in the region is equal to its share nationwide; the higher the LQ value, the more “concentrated” the industry is in the region. It can also indicate which jobs are “unique” to a region. Texas’ 0.17 LQ in the textile mills industry means statewide jobs are just 17 percent of the industry’s nationwide share, while leather products manufacturing jobs in Texas are 80 percent higher (Exhibit 1).

U.S. and Texas employment incurred heavy losses from 2001 through 2016 in the textiles, apparel, leather and allied product subsectors, including an 80 percent drop in apparel manufacturing jobs. Texas manufacturing jobs in leather and allied products did fare better than national trends, only falling 21 percent compared to 51 percent nationwide. In total, the four subsectors declined by 62 percent in the U.S. and Texas from 2001 through 2016 (Exhibit 2). 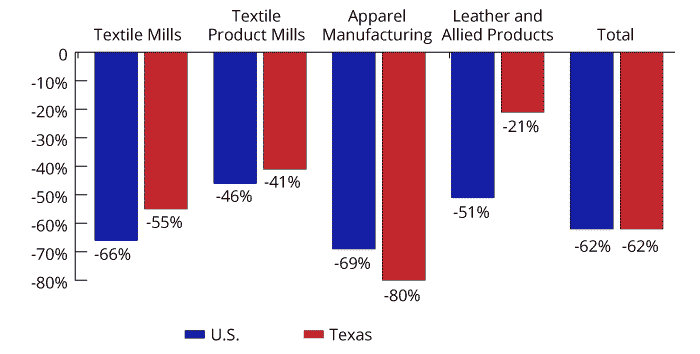 Despite these long-term job losses, the Texas Workforce Commission projects that employment will increase for all four subsectors from 2014 through 2024. Overall, Texas employment in these subsectors is expected to rise by 1,900 jobs, or 11.1 percent, during this period (Exhibit 3). 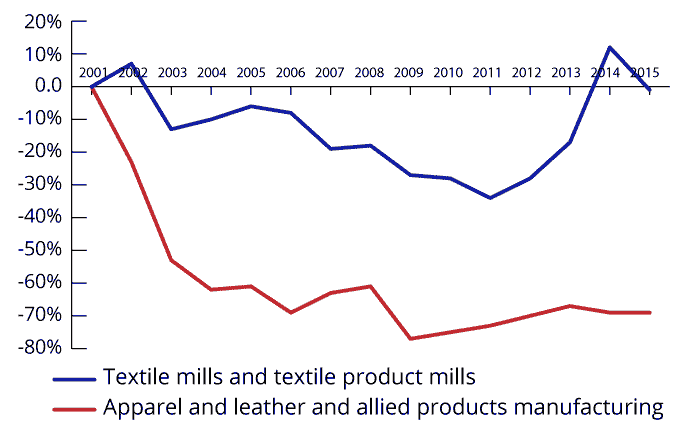 Manufacturing continues to drive output and productivity in the Texas economy, creating jobs paying well above the statewide average. It also contributes significantly to job creation in other industries, particularly in design operations and services.

U.S. and Texas jobs in the textiles, apparel and leather manufacturing subsectors fell by 62 percent from 2001 through 2016. These developments are expected and have occurred in other advanced economies, as production easily moves to cheaper labor markets.